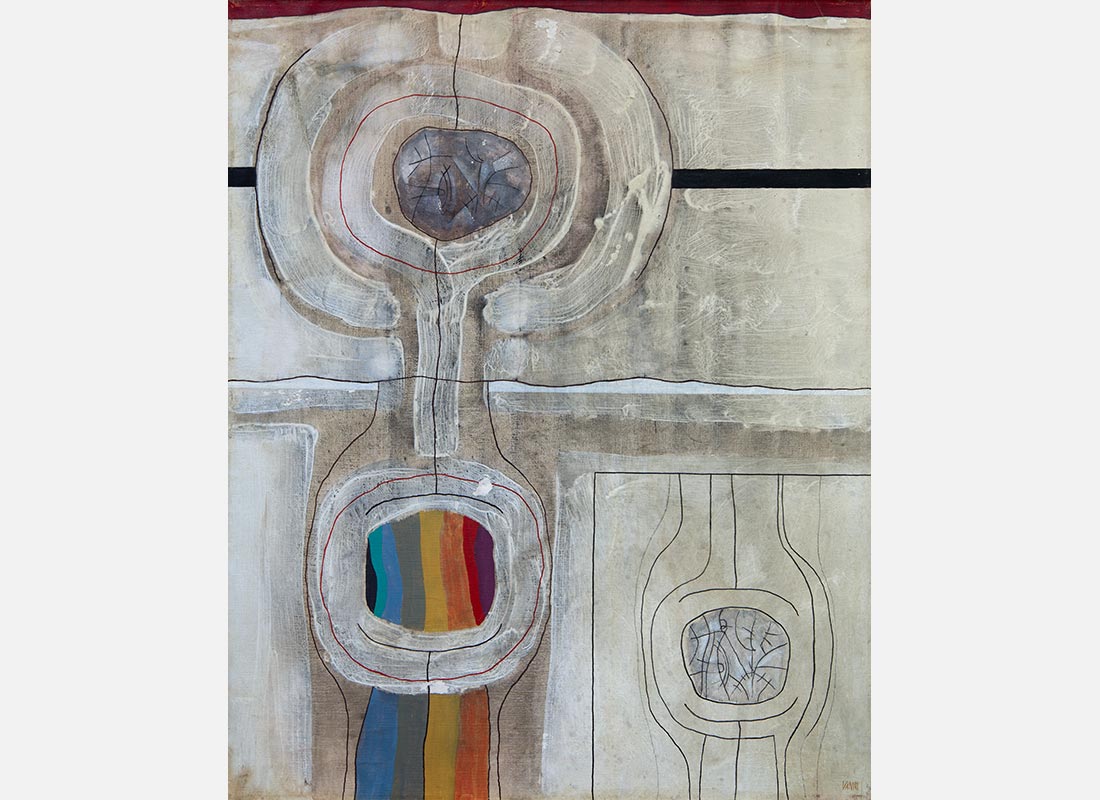 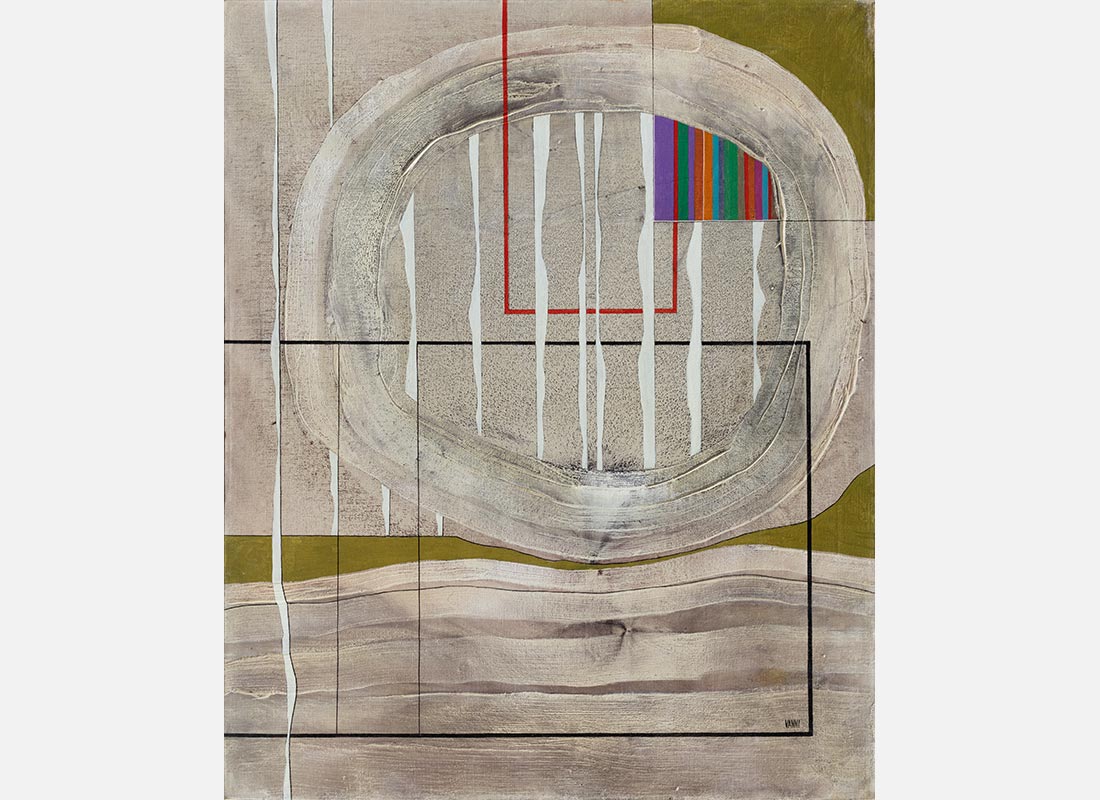 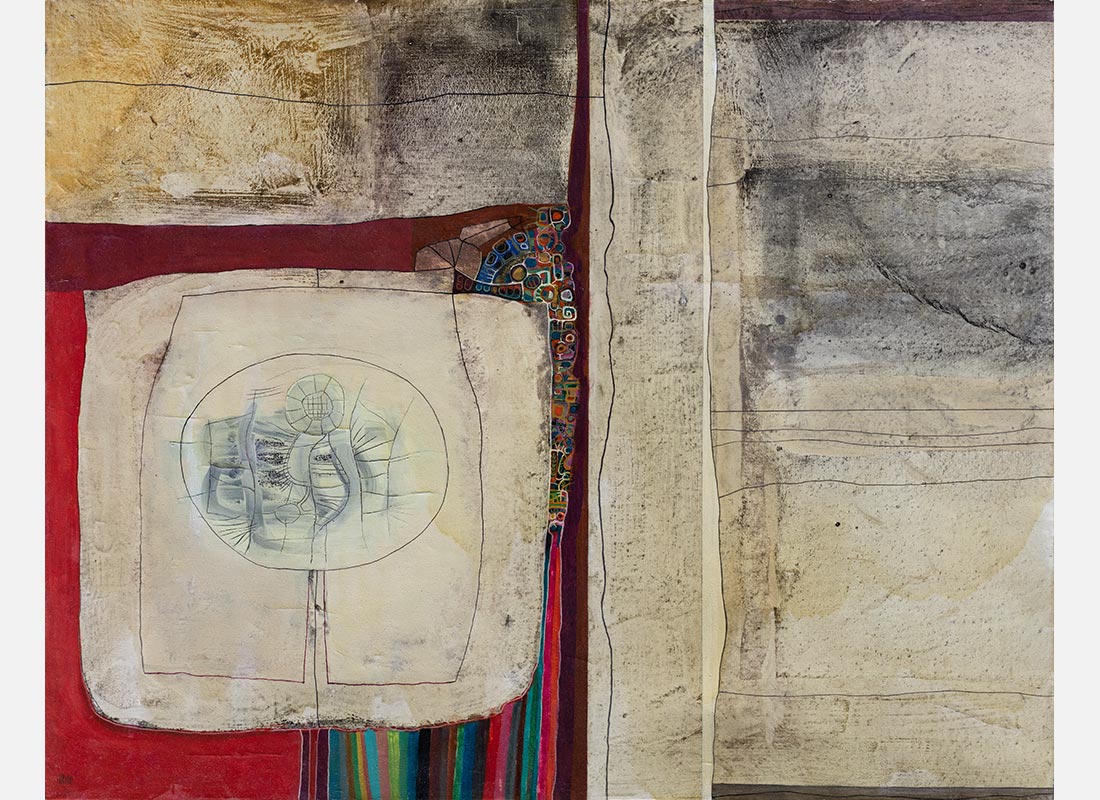 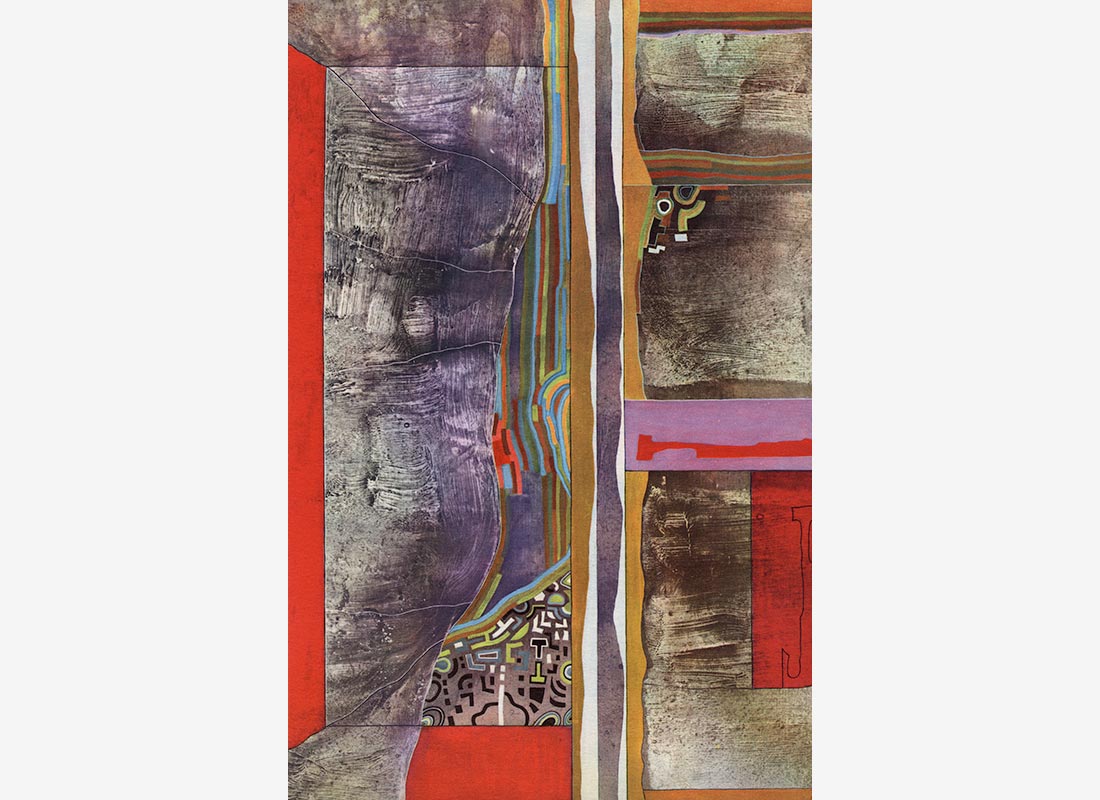 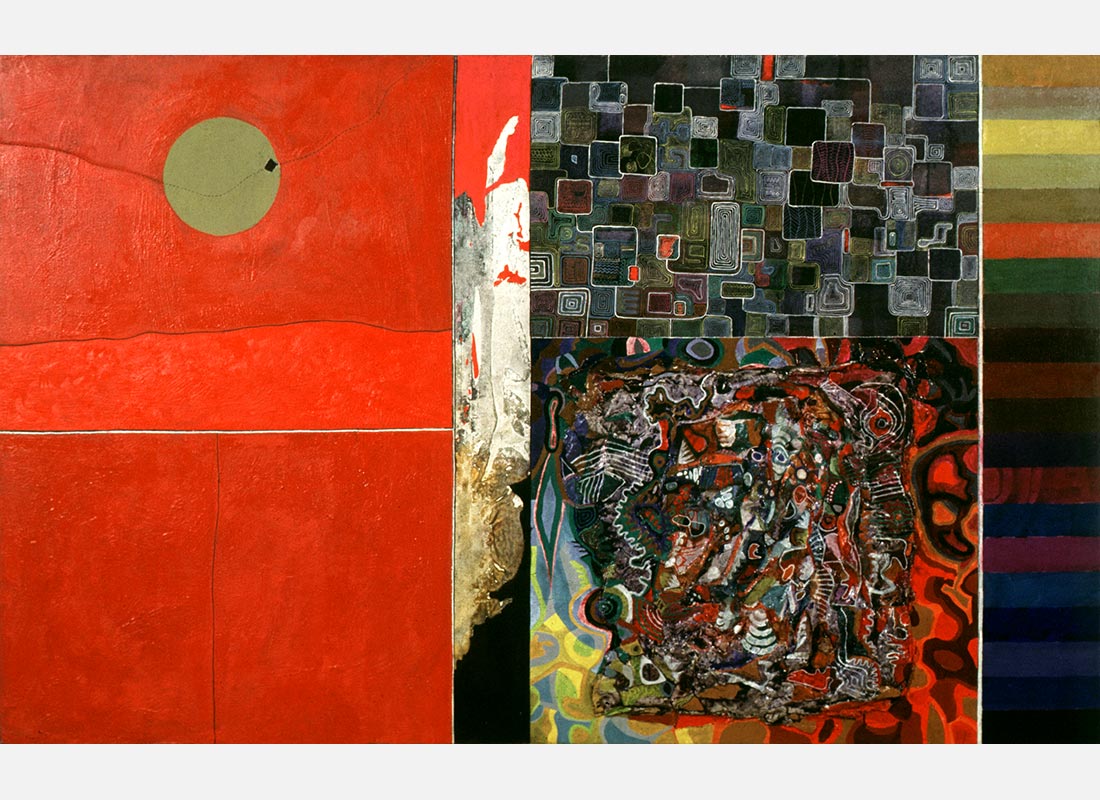 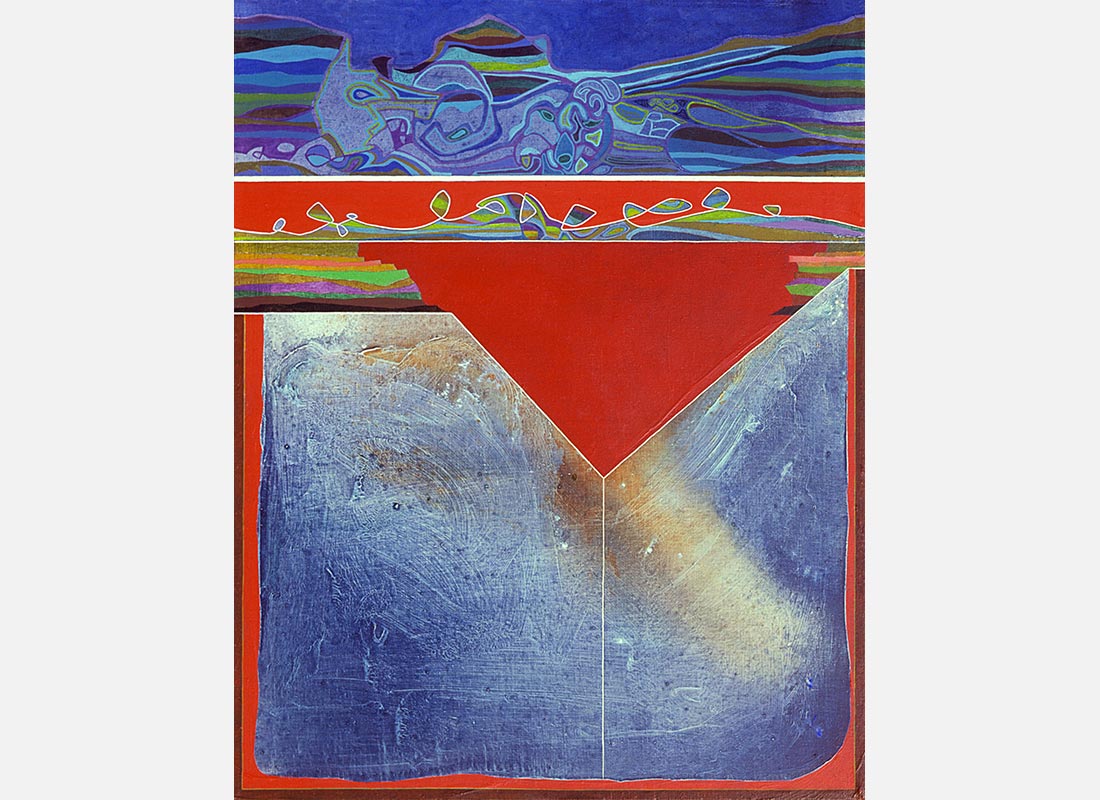 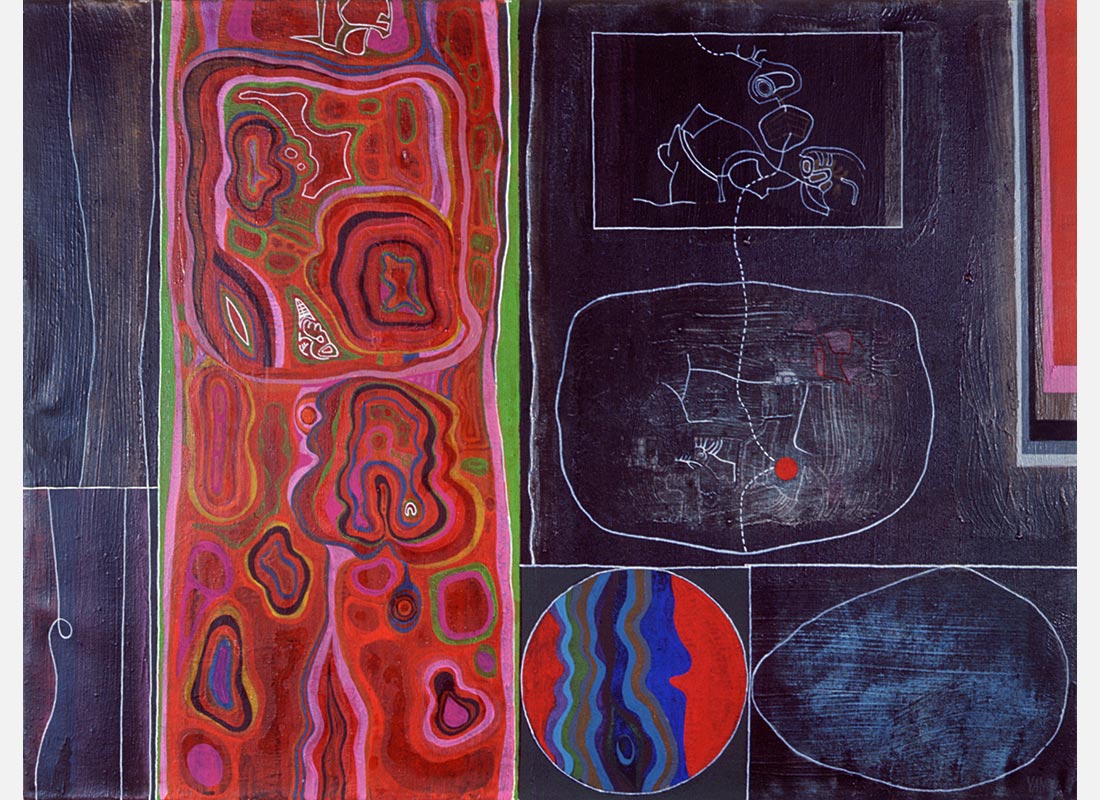 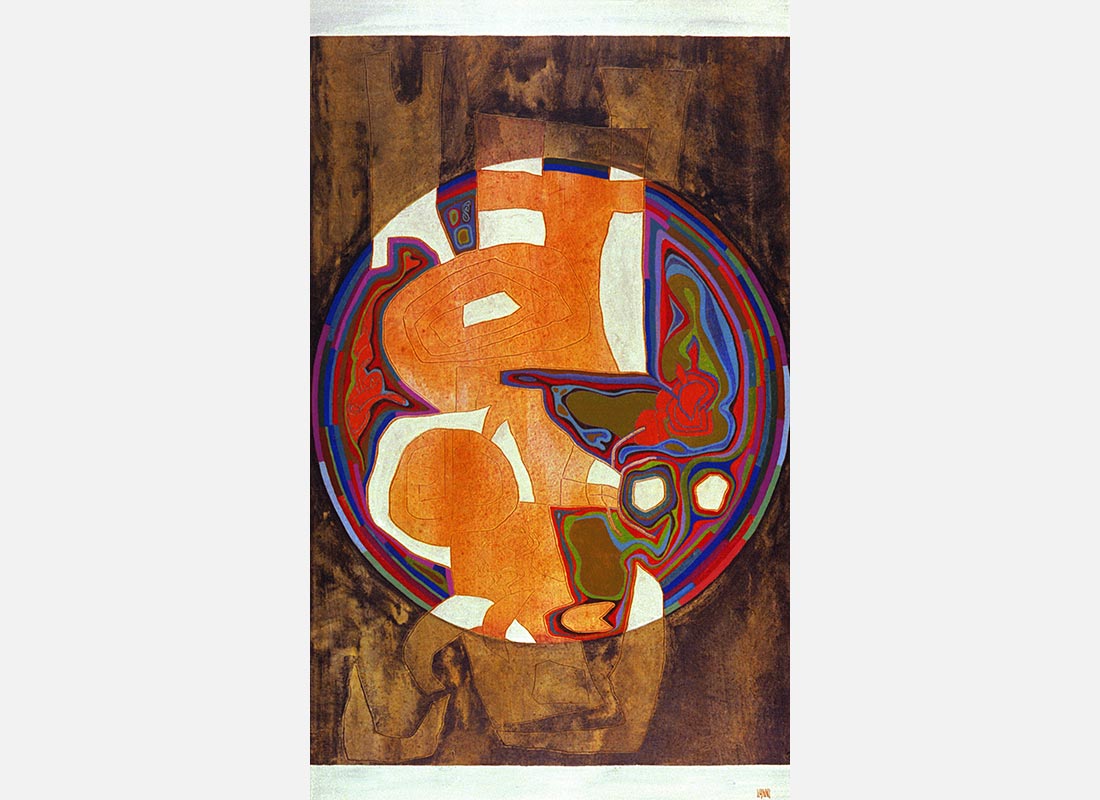 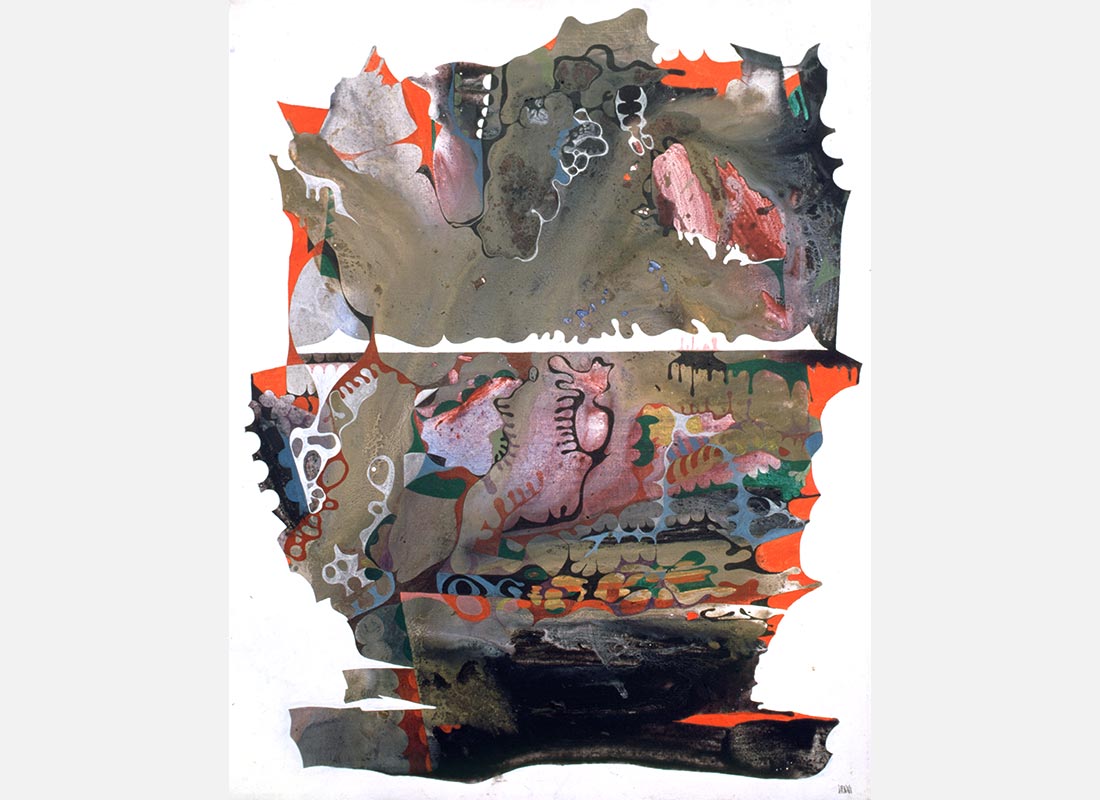 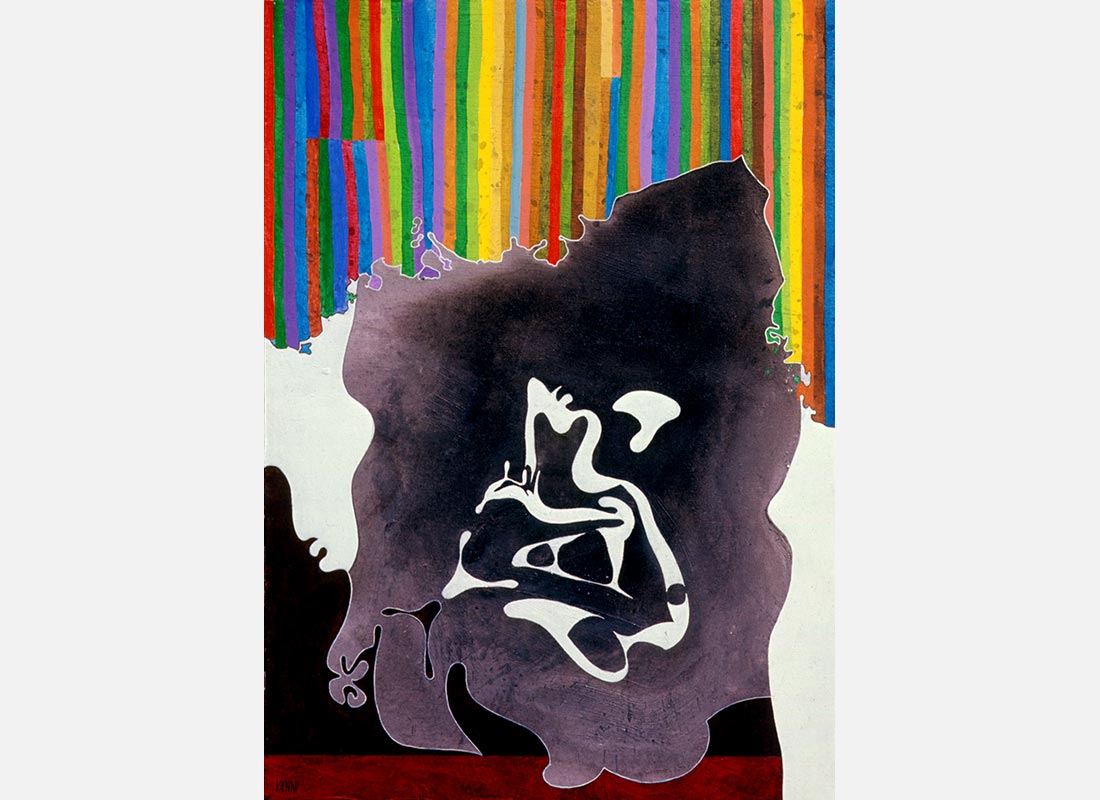 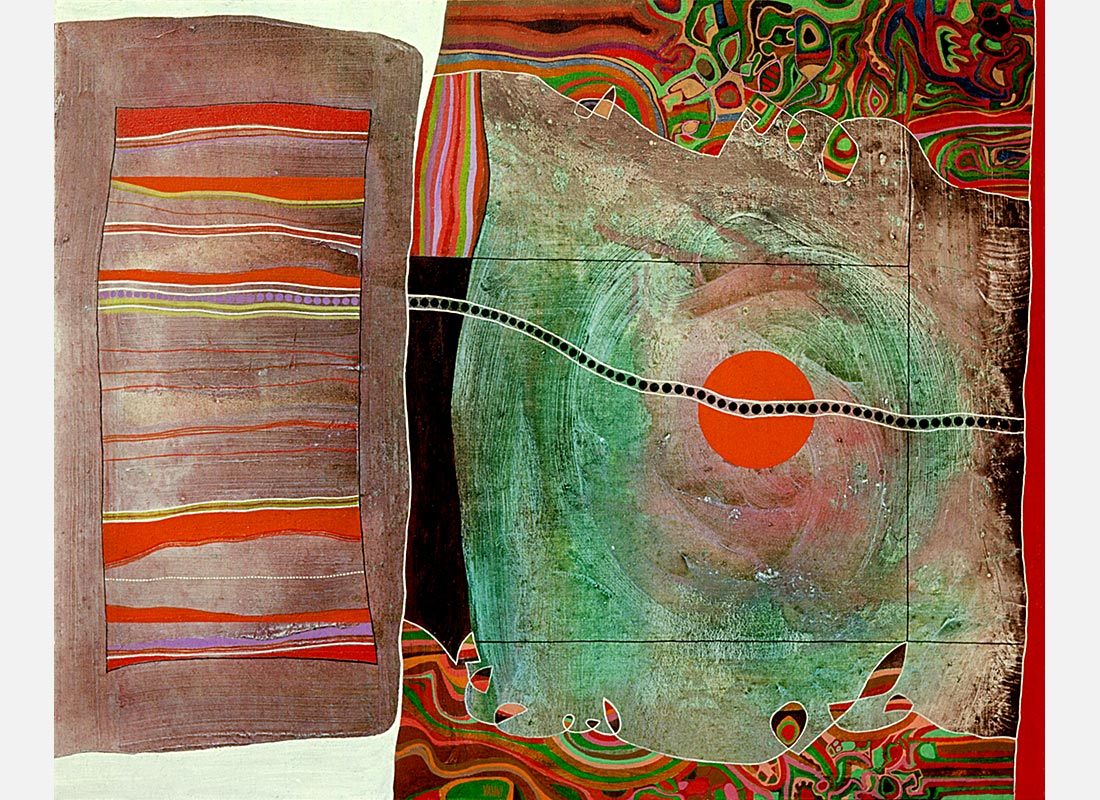 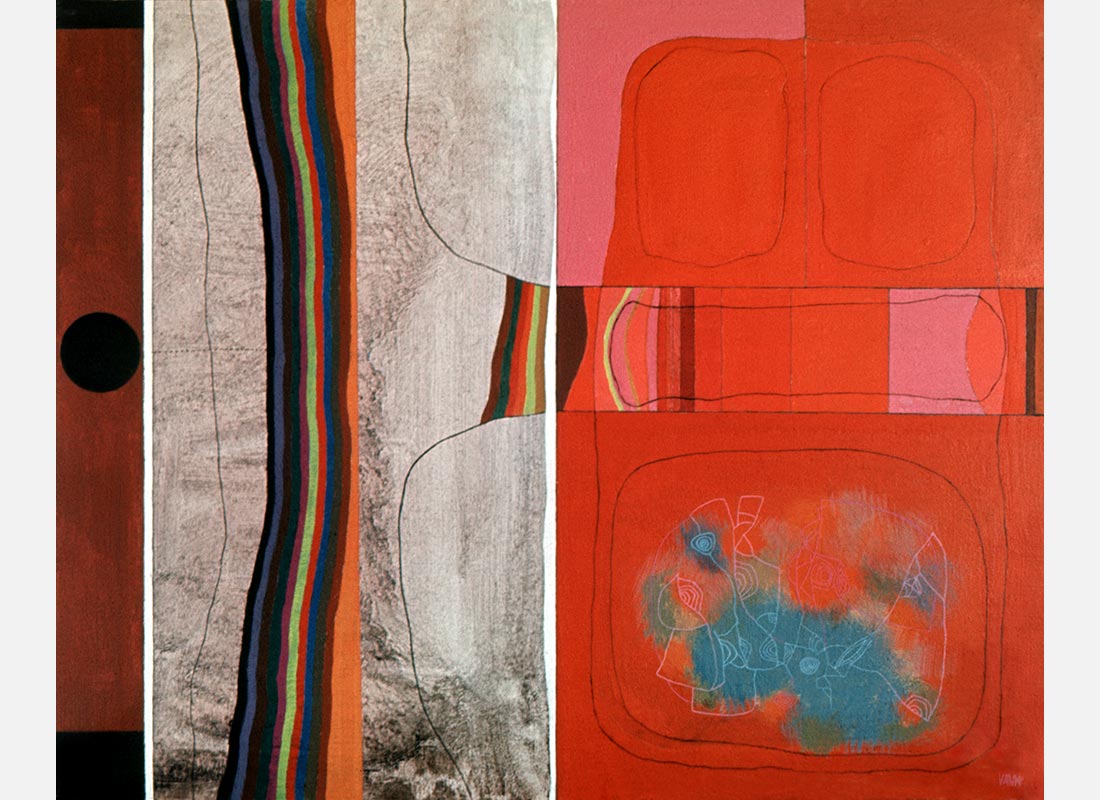 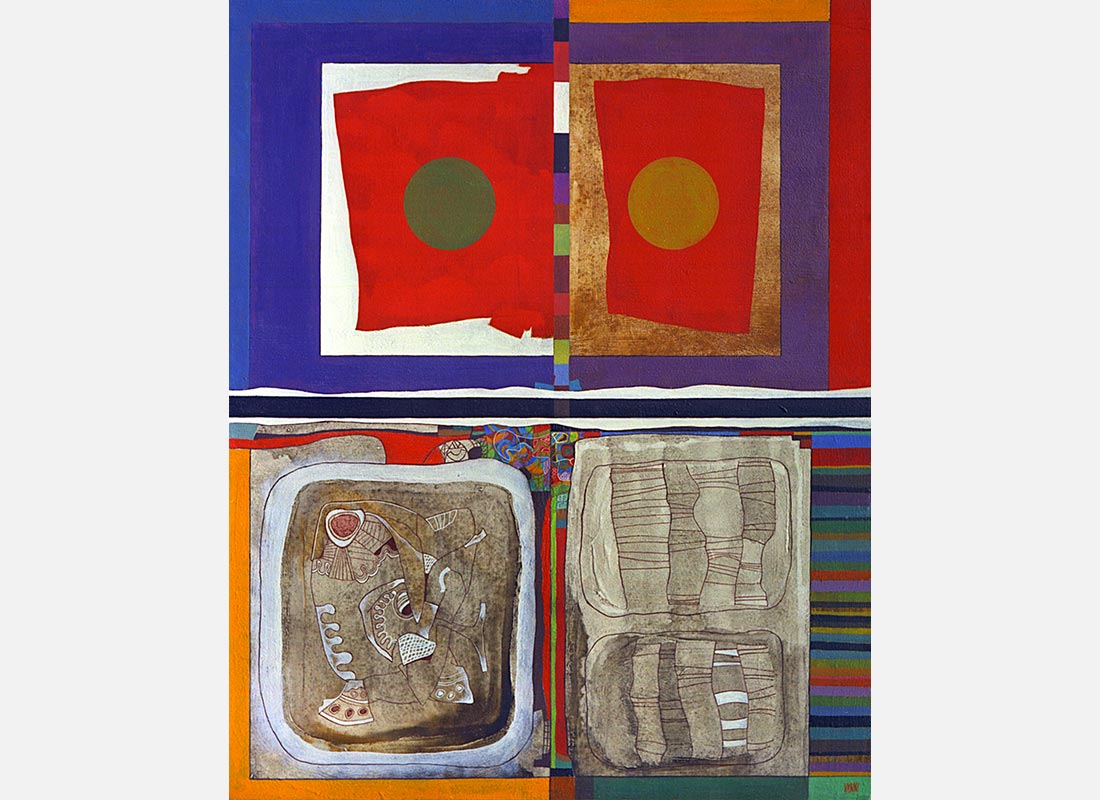 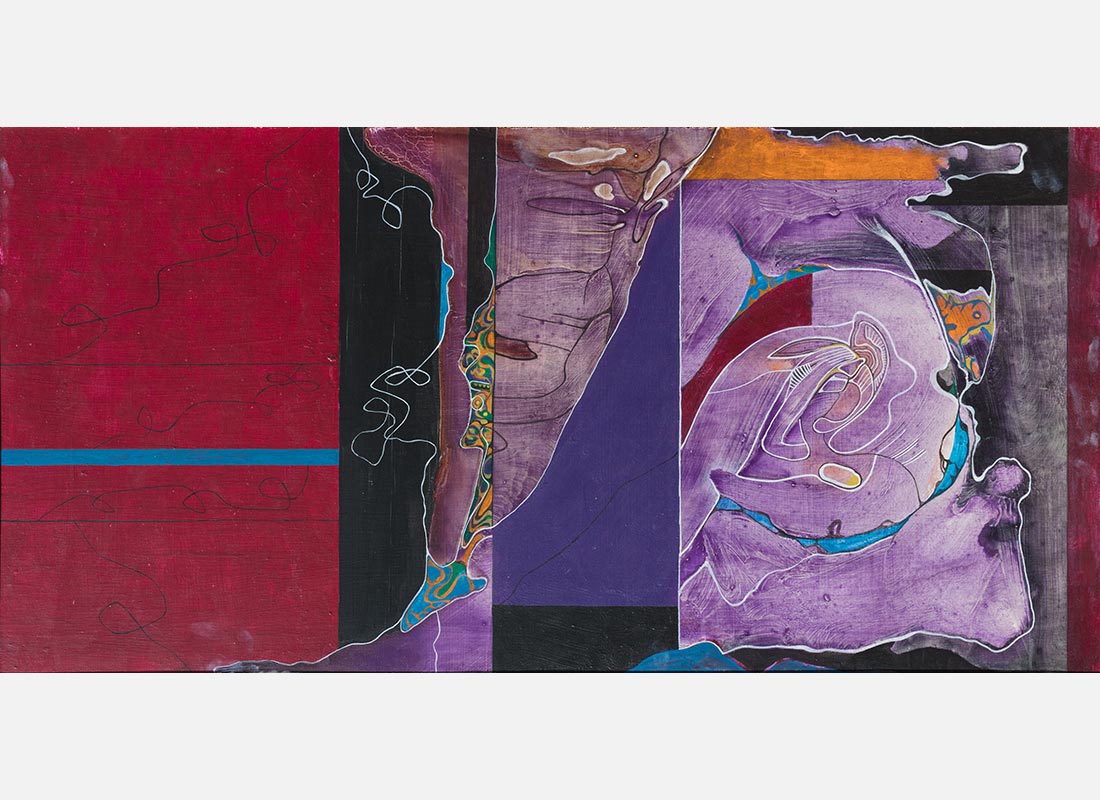 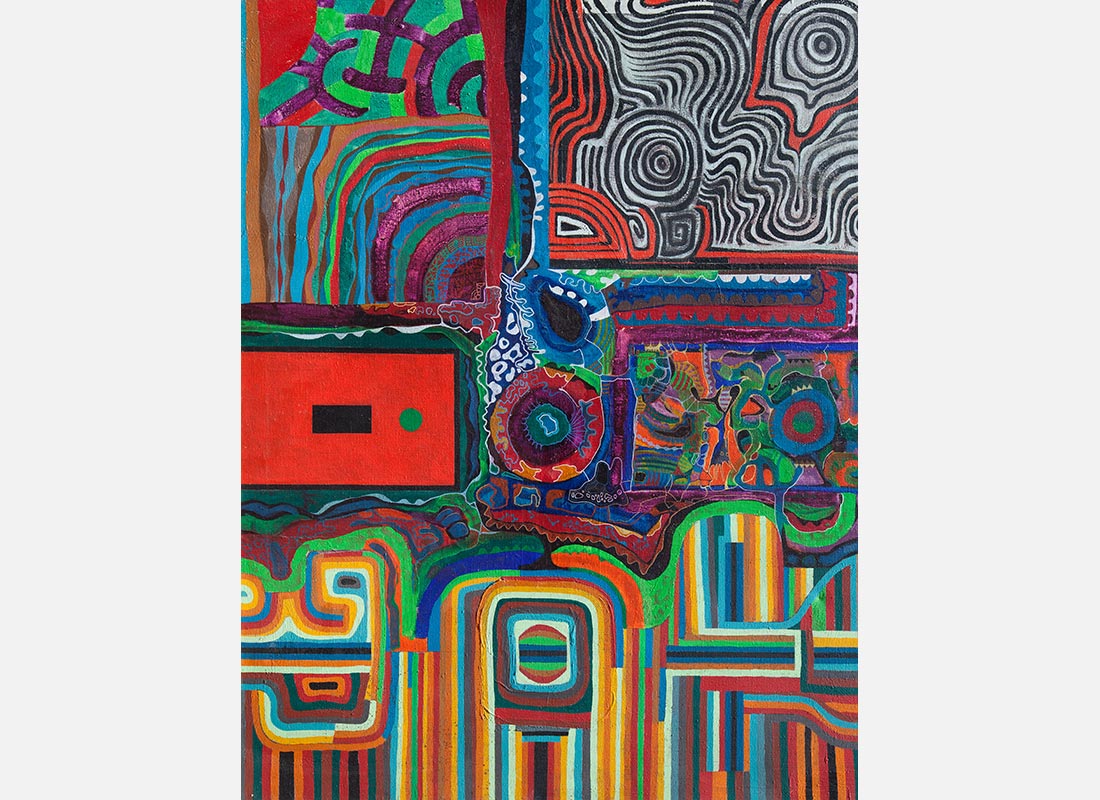 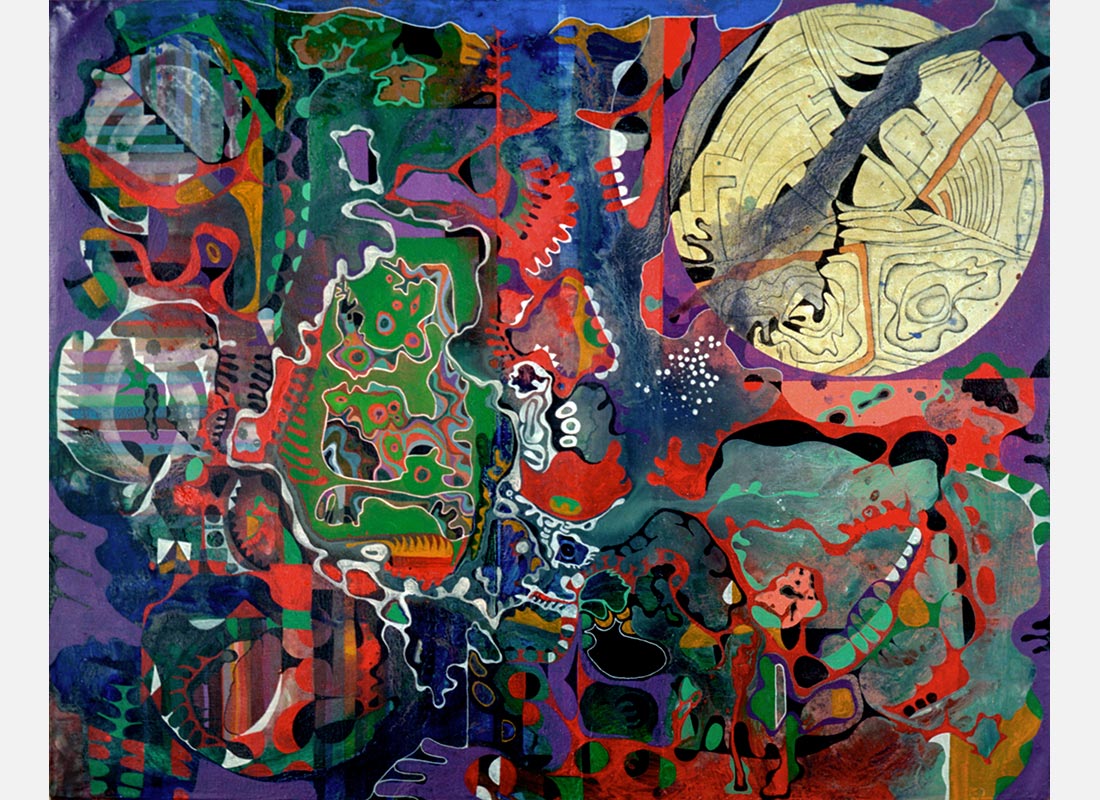 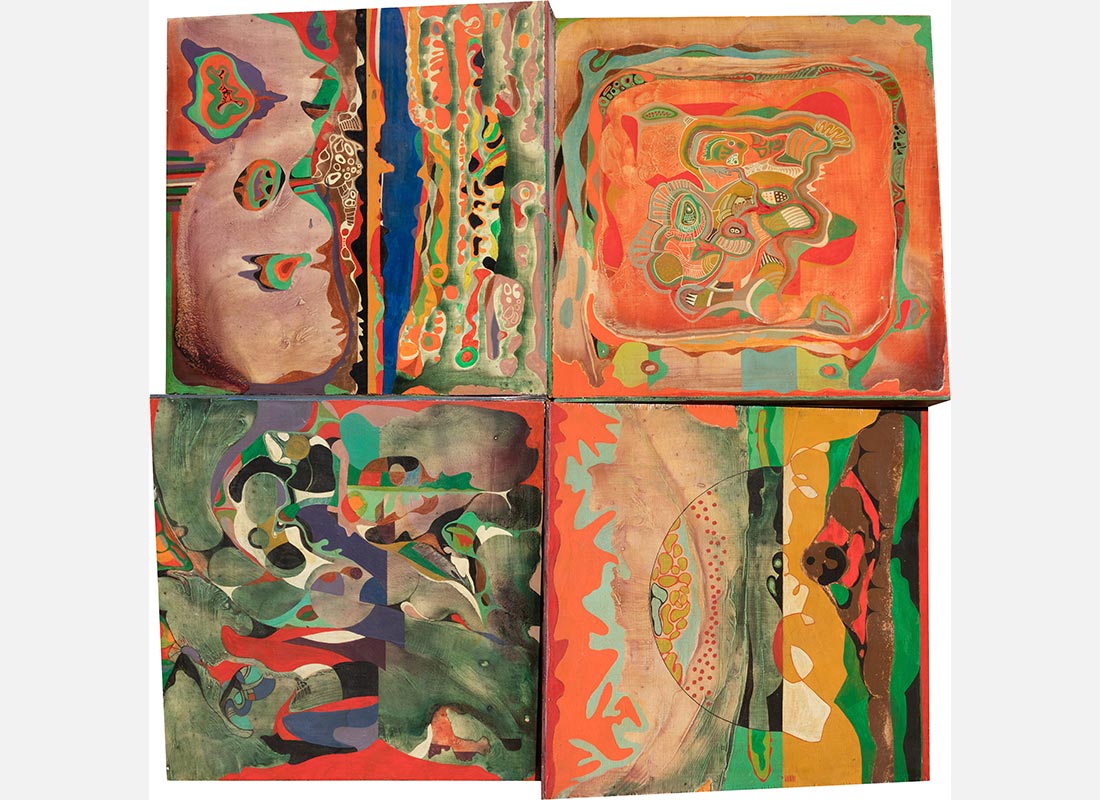 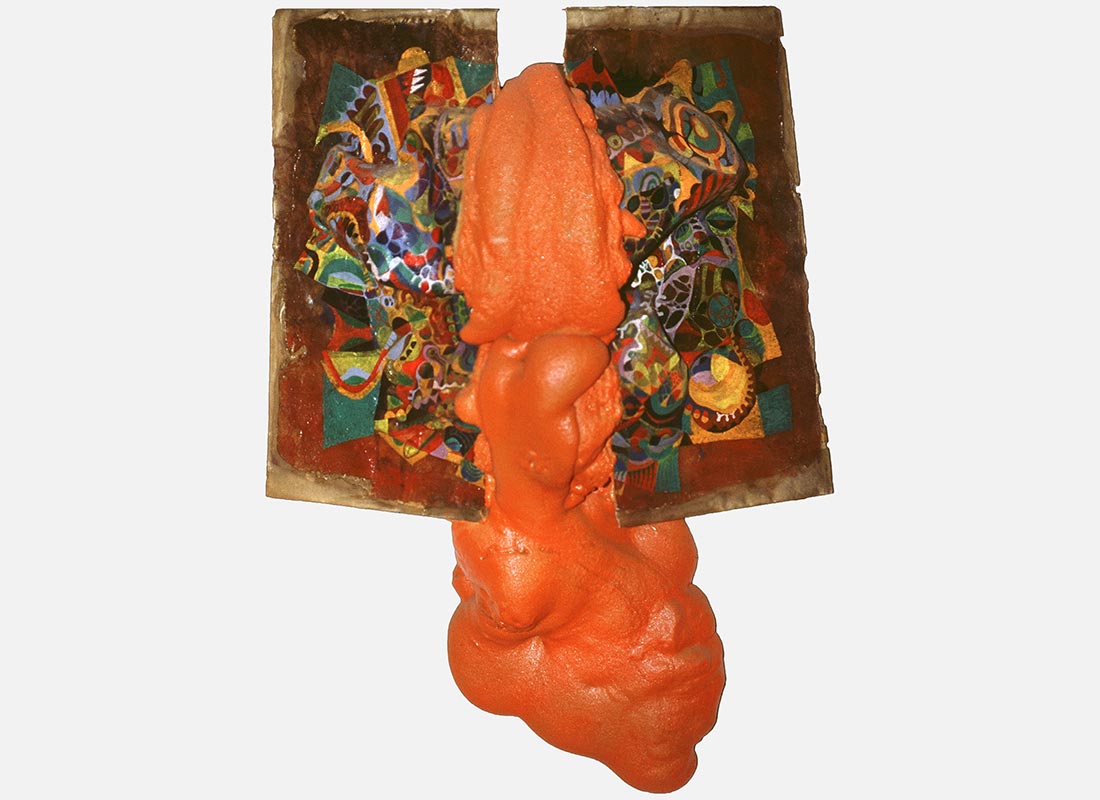 The paintings from ’65, exhibited at Galleria 88 in May of that year, in a show organized by Corrado Cagli, represent the first example of an imaginative universe where suggestions of different realities, linguistic contradictions and grammatical discontinuities contribute to the formulation of spatial ambiguities. Highly textured fields coexist with others where the emphasis is on color. Geometric forms exist alongside organic elements; sections allude to a view from high above, delimited by edges that evoke silhouettes of coasts seen in the mist on the horizon. Demarcations of illusory spaces (a painting within the painting, a canvas that reveals another one) negate each other in an alternation of disenchanted certainties.

Vanni describes this when he states: …it must have been in early ’64. I was in my studio when I saw out of the corner of my eye a painting that I didn’t remember. I turned to then realize that it was a group of three paintings of different dimensions, leaning against each other. Each hid a part of the others; but the small portion that was visible insisted on being included in the frame of vision almost as if to confront its credibility vis-à-vis the others and to throw off the existing balance, introducing its own rhythm and definition of space. This is when I began to be consciously interested in discontinuities, contradictions of style, quotations from my personal museum of memory, hints of the layering of different cultures that hide and coexist in our subconscious. Sometimes the intruding element is small; in other cases the two elements share an equal portion of space or multiply, becoming allusions to different worlds that are interwoven, occupying every portion of available space, to leave intact only a centimeter of quiet amidst an inextricable conflict. I also tried painting half the canvas, to then cover it over until I had forgotten what I had done there. Only then would I paint the other half, to achieve a dialogue between the two parts that would exist without any conscious intervention on my part.

In 1966 Vanni spent a year in Agadir, Morocco. The visual and cultural experience of that environment enriched the world of contradictions he was asserting in his work. There were also certain images whose visual impact would echo on a formal level in subsequent work: the infinite differences in colors and textures of the desert landscapes; the coexistence of refinements and roughness in Berber folk art, as in the finely worked jewels set around amorphous stones; rough cotton garments with inserts embroidered and brocaded in vividly colored silk.

Returning to Rome in the autumn of ’66 Vanni plunged into a series of paintings where he achieved a successful synthesis of his recent experience.

These works were exhibited in solo shows at the Rizzoli gallery in Rome, in April ’68, and in Milan, one month later. Compared to the works shown at Galleria 88 three years earlier, one immediately notes an increased density of compositional elements and a marked saturation of color. Contradictions that were barely expressed earlier are now repeatedly stressed.

The image that emerges from the Babel of languages and meanings in the works from this period is a vision of the world expressed by the contemporaneity of all possible modes, revealed in all their contradictions. This explains Vanni’s frequent resumption of work on paintings that he had considered finished. He adds new textures and themes, developing the concept of the palimpsest, which will continue to interest him for some time.

This is the period when Vanni’s work is closest to certain formal structures developed by Cagli. There is a fascination with labyrinthine forms, both thematically and formally. Every empty space systematically overflows with signs, creating a directional disorientation. Signs are organized in concentric rings, within which the tones become indistinct, creating reliefs similar to those in topographic maps. While these elements in Vanni’s work are undoubtedly tied to his childhood memories of microbiology, Cagli’s work in the same vein provided him with significant interpretive parallels. However these formal influences become less evident when, in the alternation between condensed forms and empty surfaces, so typical Vanni’s design process, the broad spaces take the upper hand the swarming forms of activity are limited to the edges. Thus it seems that while formal contributions from Cagli are comparable to other visual allusions to artists such as Klee or Klimt, the older Italian master provides a much more fundamental intellectual framework for Vanni’s eclecticism.