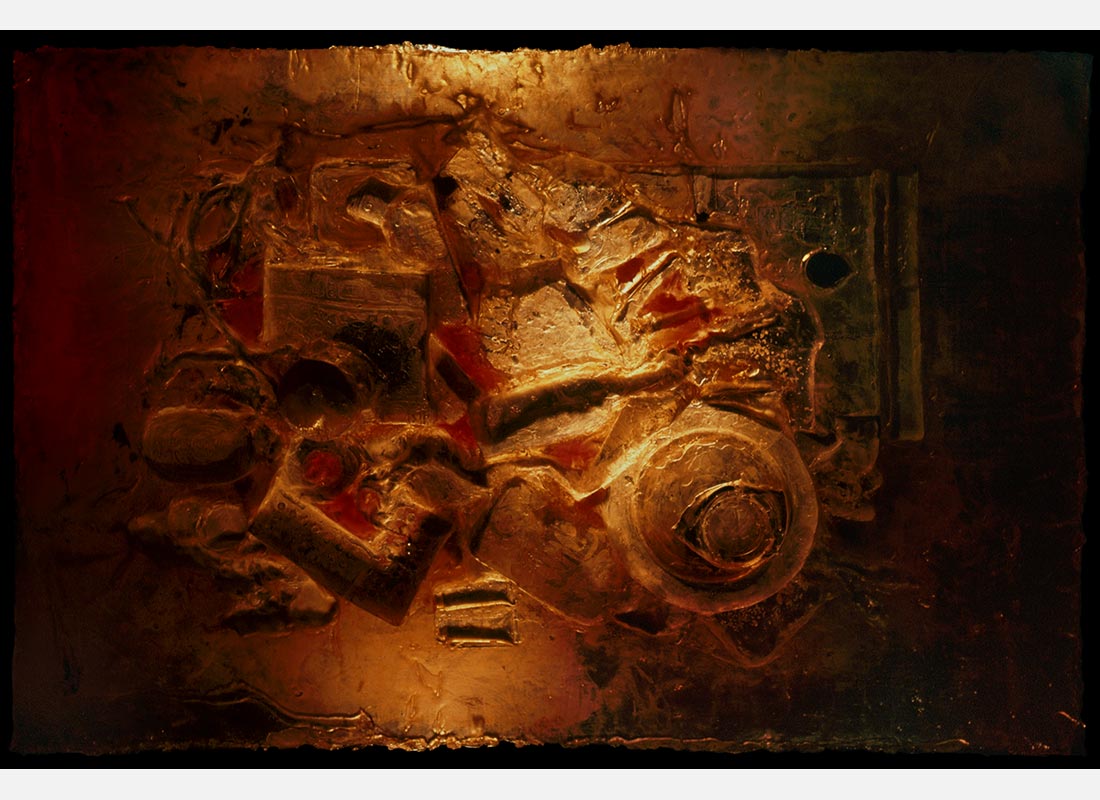 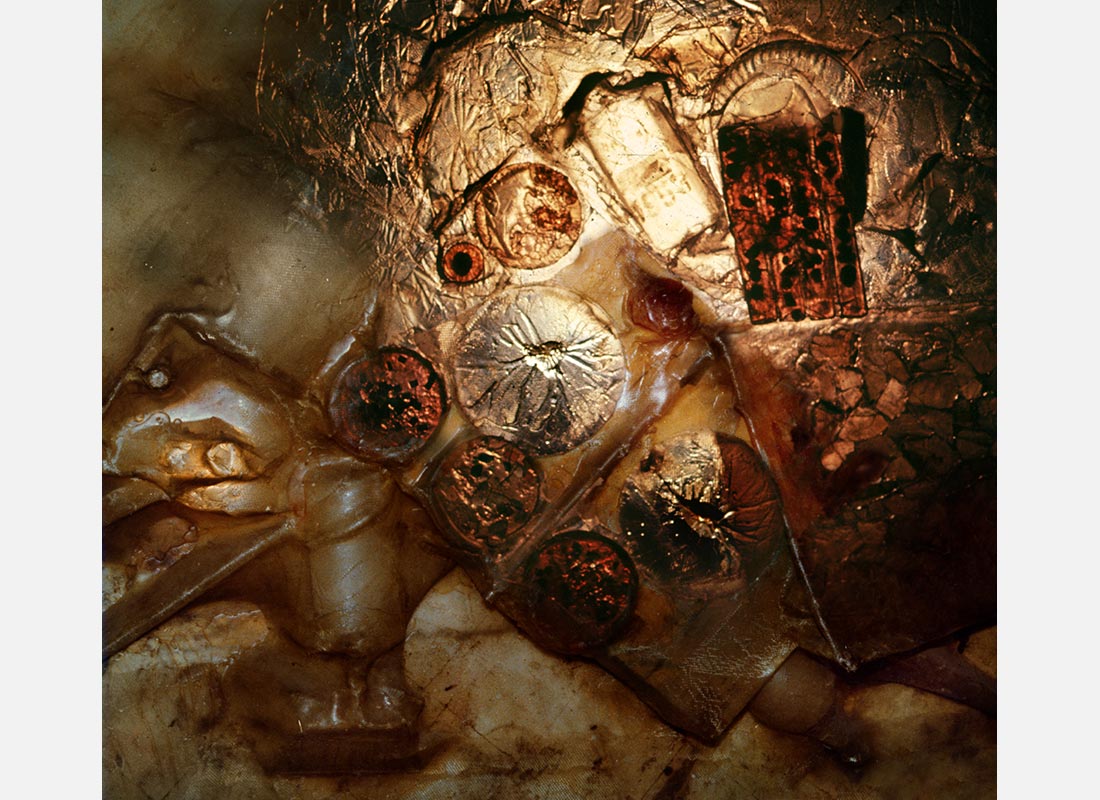 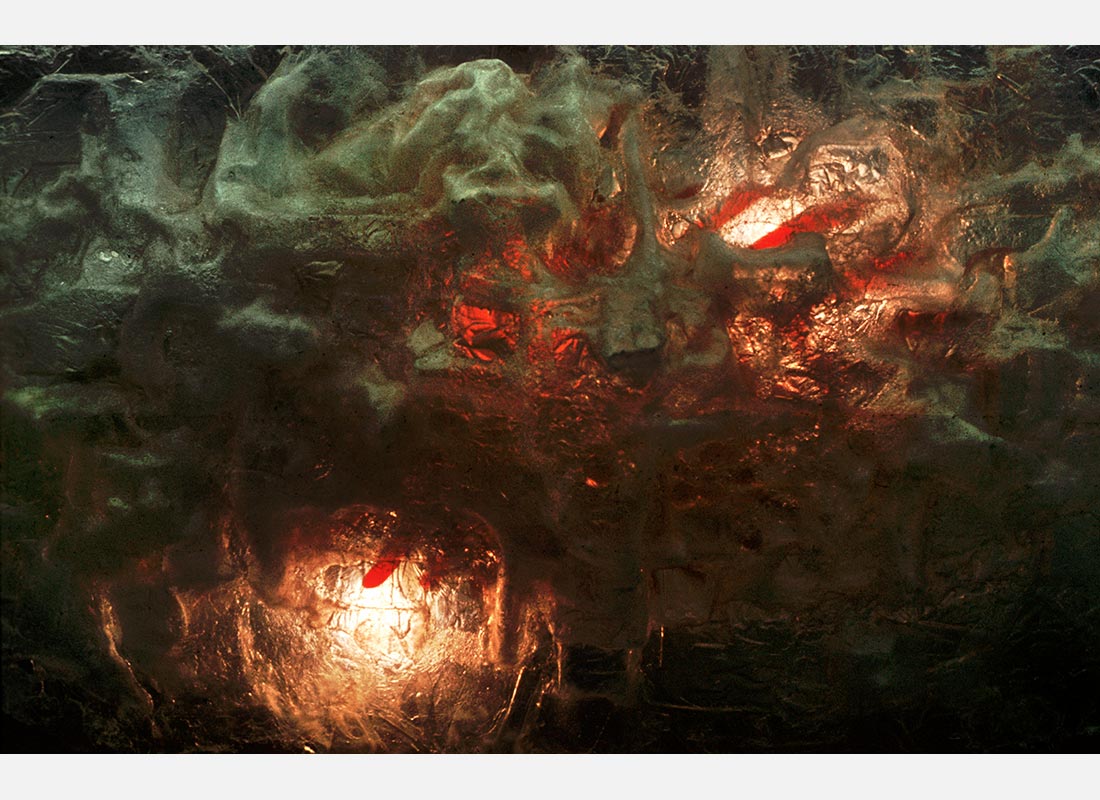 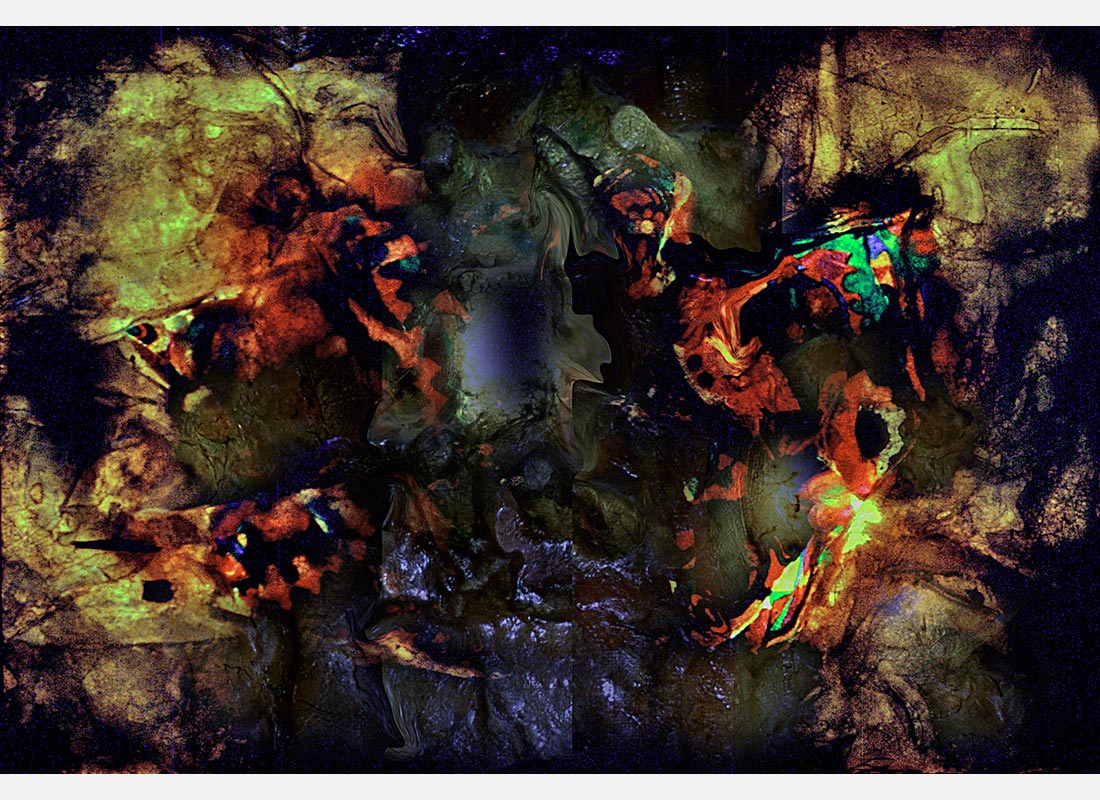 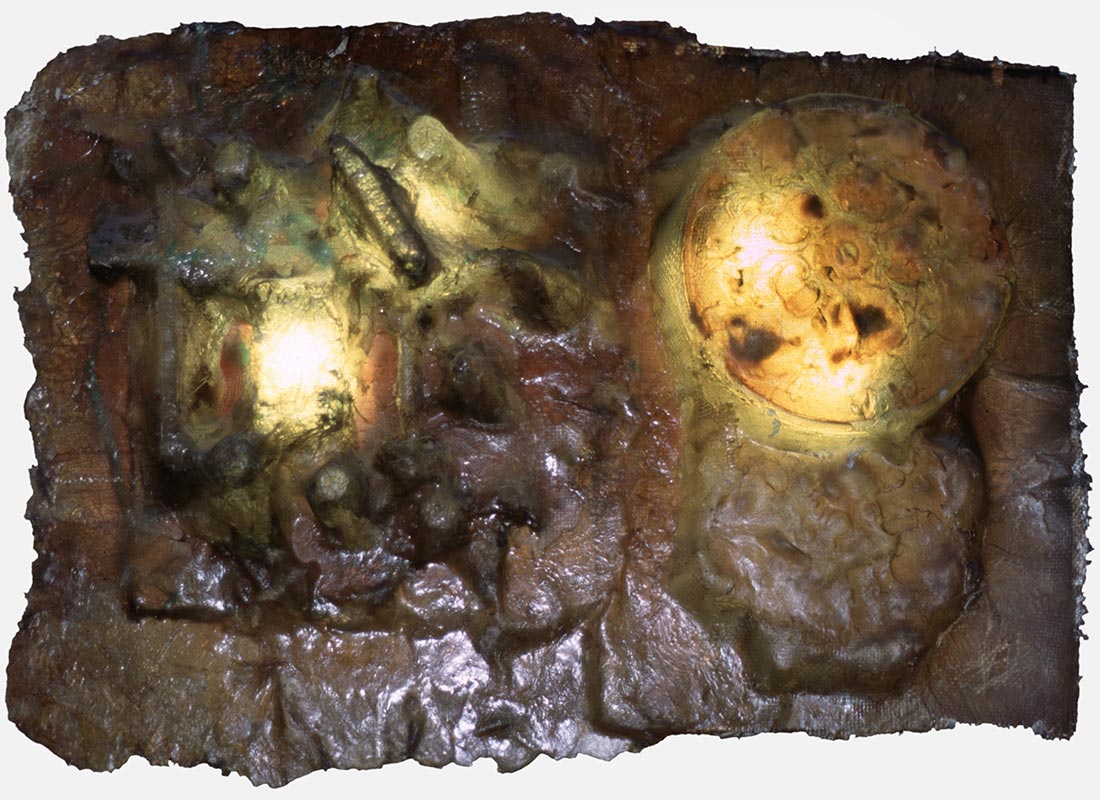 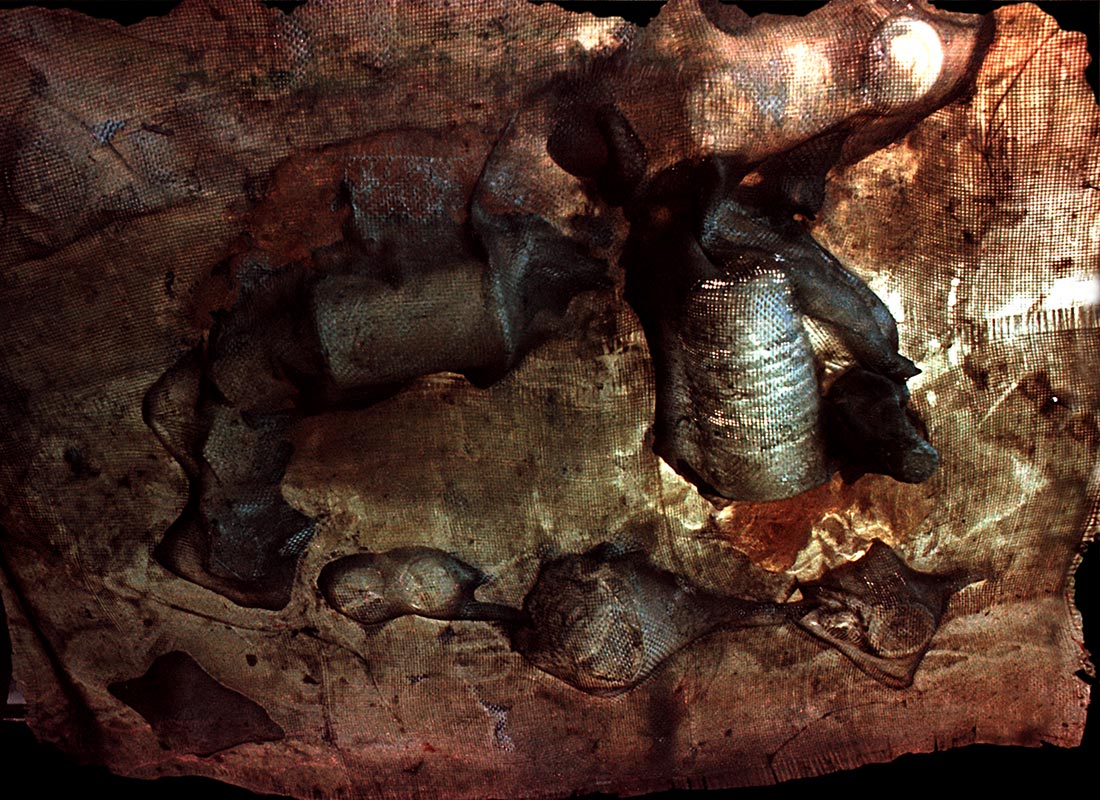 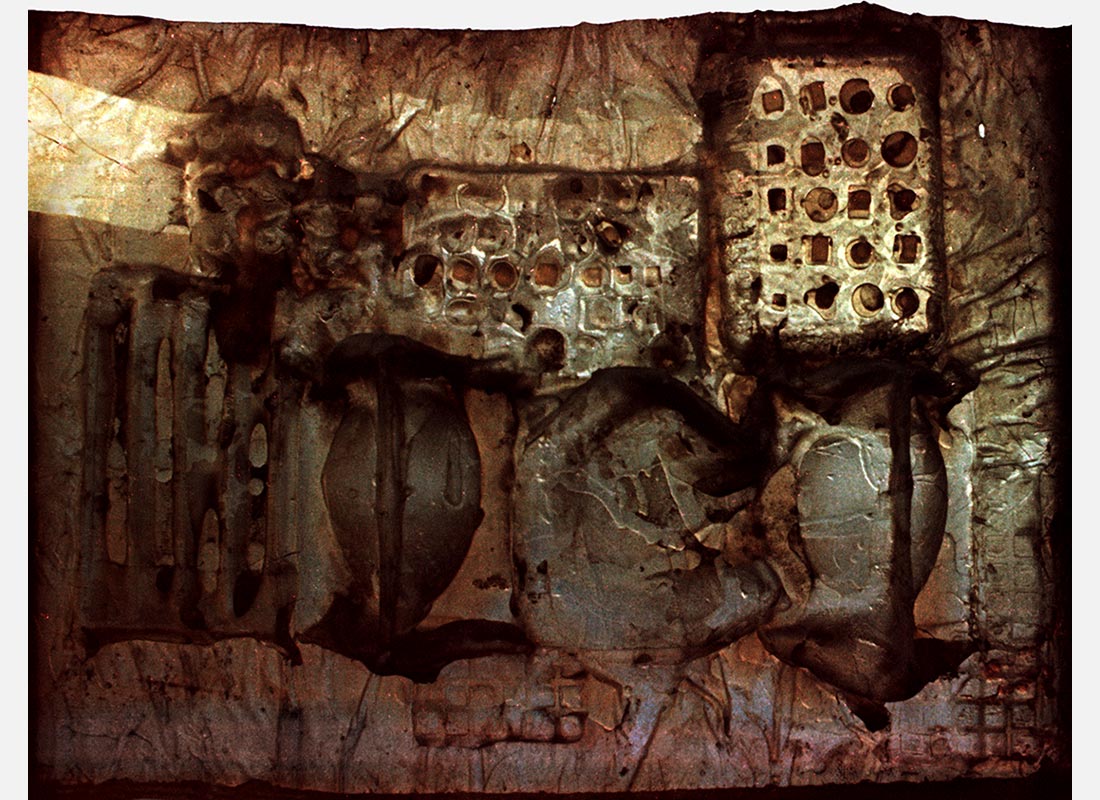 After his Rizzoli shows of ‘68, Vanni looked to other artistic forms for the means to forge ahead with his theories. There was in Rome at that time a lively climate of experimentation that corresponded to a …desire for change from the old system of art… Undoubtedly Vanni too was questioning the validity of traditional artistic means, and this led him to re-evaluate what he had accomplished thus far. However his reaction led him to further embellish his formal content rather than desecrate or negate its validity.

He began experimenting with spatial and temporal syntheses of various categories of expression. He concentrated on the creation of bas-reliefs in fiberglass-reinforced plastic, almost like three-dimensional projections of his last paintings. He made molds from casts formed from apparently casual assemblages of disparate objects – tins, buckets, plates – that form convulsive agglomerations, like Gordian knots of waste from the modern world. The translucent skin that records their–shape becomes the support for further interventions. In the earliest bas-reliefs the surface is simply painted, creating in certain cases apertures that reveal the interior. Later these become animated by the projection of pictorial interventions filmed specifically for this purpose. These represent the continuous transformation of forms and compositions and they translate into temporal terms the spatial conflict of the contradictory and discontinuous elements Vanni was working with in his paintings. Thus the painting becomes an object in perennial transformation in time, intensified by the interaction of the film with an extremely irregular surface that interferes with a unified perception of the image. Moreover the spectator, moving around the sculpture, increases the possibility of multiple readings.

According to this same creative dynamic, Vanni had planned to project sequences of pictorial images onto even more changeable surfaces, such as pulsating rubber membranes. Vanni also shot two feature-length films in super-8, Due risvegli in tre tempi / Two Awakenings in Three Times, 1969, and Uno due tre via / One Two Three Go, 1970. These were characterized by frenetic, syncopated montages of images and free associations, chosen for the most part casually from everyday life and nature, interrupted by shots of more pictorial subjects, such as painted bodies and fields of vibrating color. The totality of images was accompanied by music that sometimes emphasized the visual rhythm and sometimes provided a counterpoint to it.

The three-dimensional component was developed beyond the bas-relief, particularly in collaboration with architect Guglielmo Mileto. Together they designed temporal sculptures that, under the impact of various factors, would change over time. One particular idea was for a fountain made from a wide variety of calcareous stones and other materials that would corrode at different rates, which would erode beneath the action of the water, assuming a changing form over time. One project that came to fruition was for the winter palace of the Shah, in Kish Island, Iran. This consisted of fifty-six monotypes on canvas, each three by one meter, hung in the palace in front of windows, creating a transition between interior and exterior. Vanni designed forms that related to basic geometry, emphasized by the use of vibrant colors. The goal was to exploit the wind blowing in from the desert and the strong flashes of light reflected by the sand to create luminous sails, like a bas-relief in continuous movement.