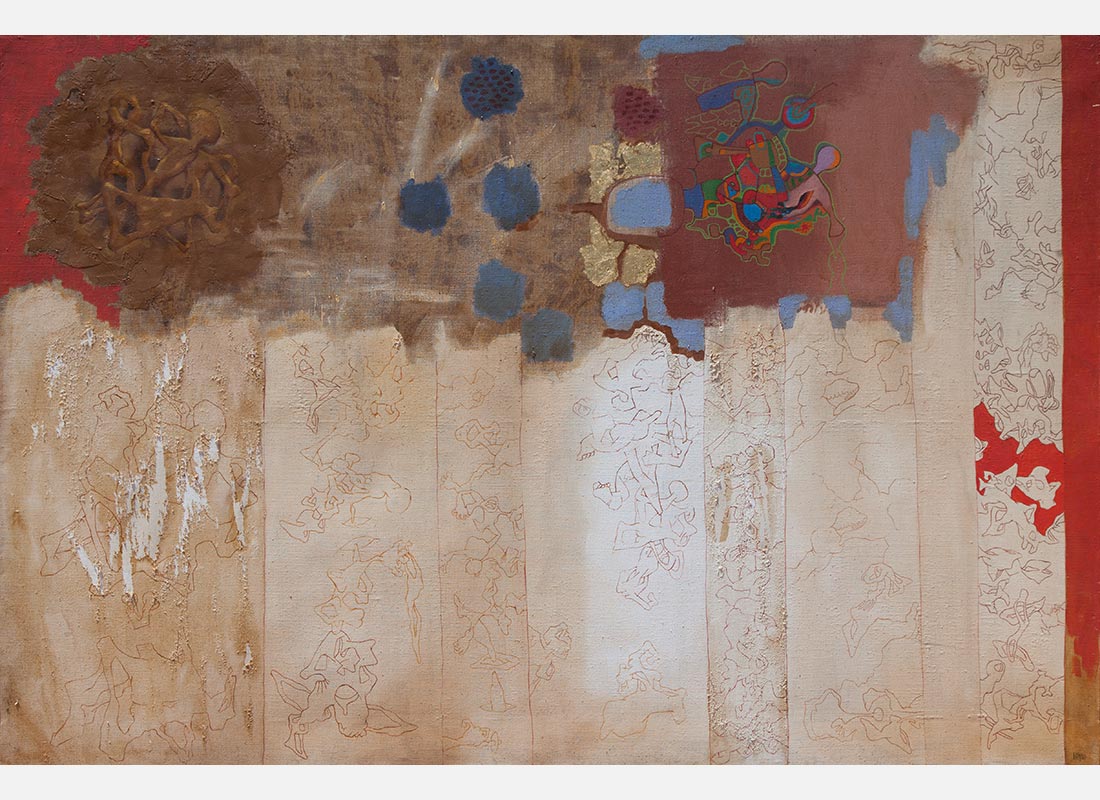 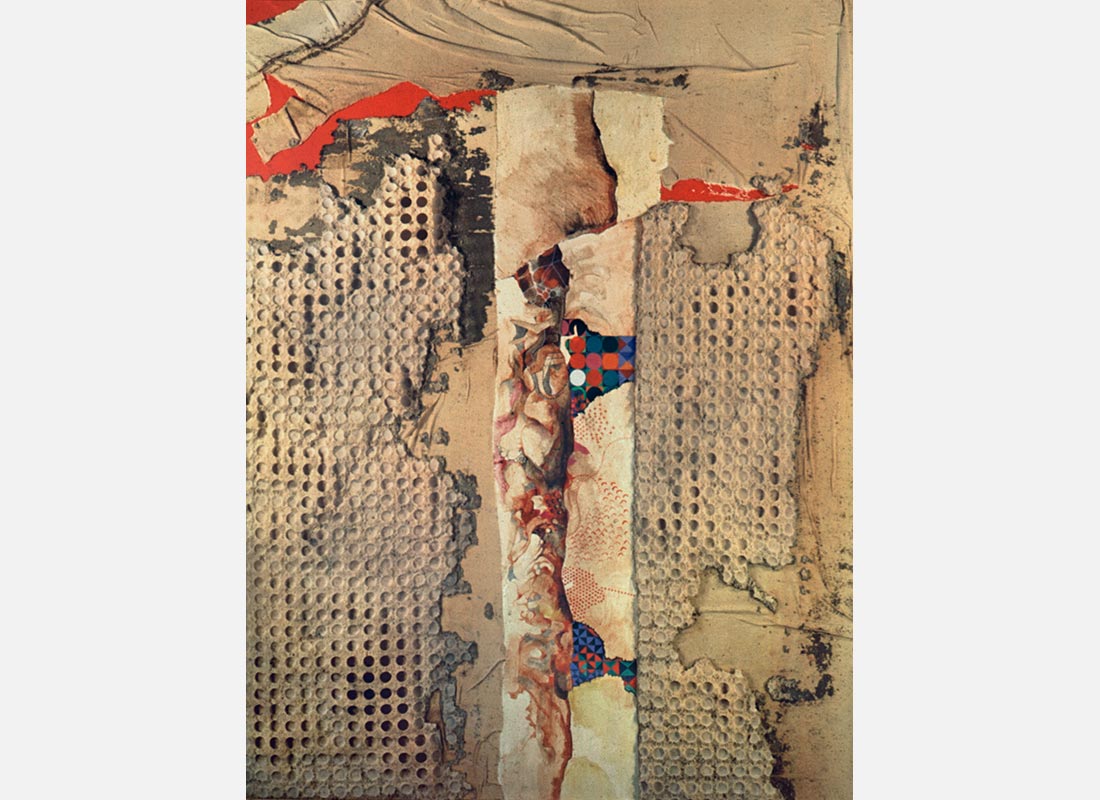 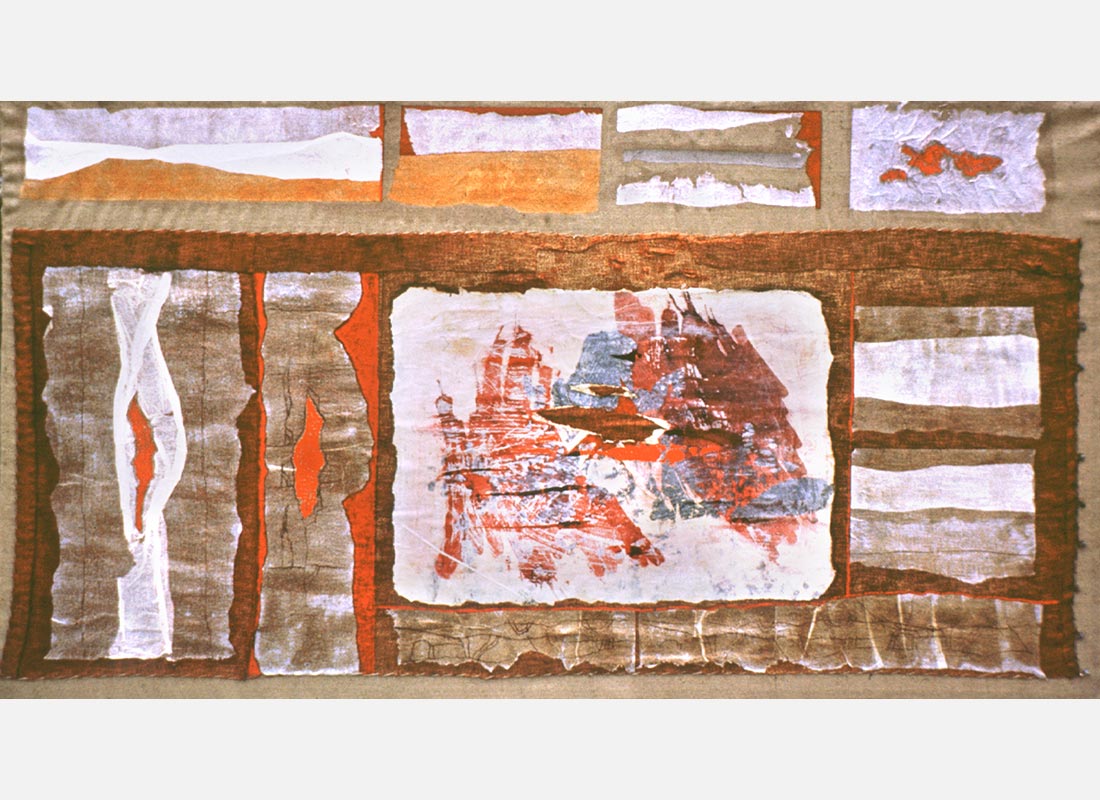 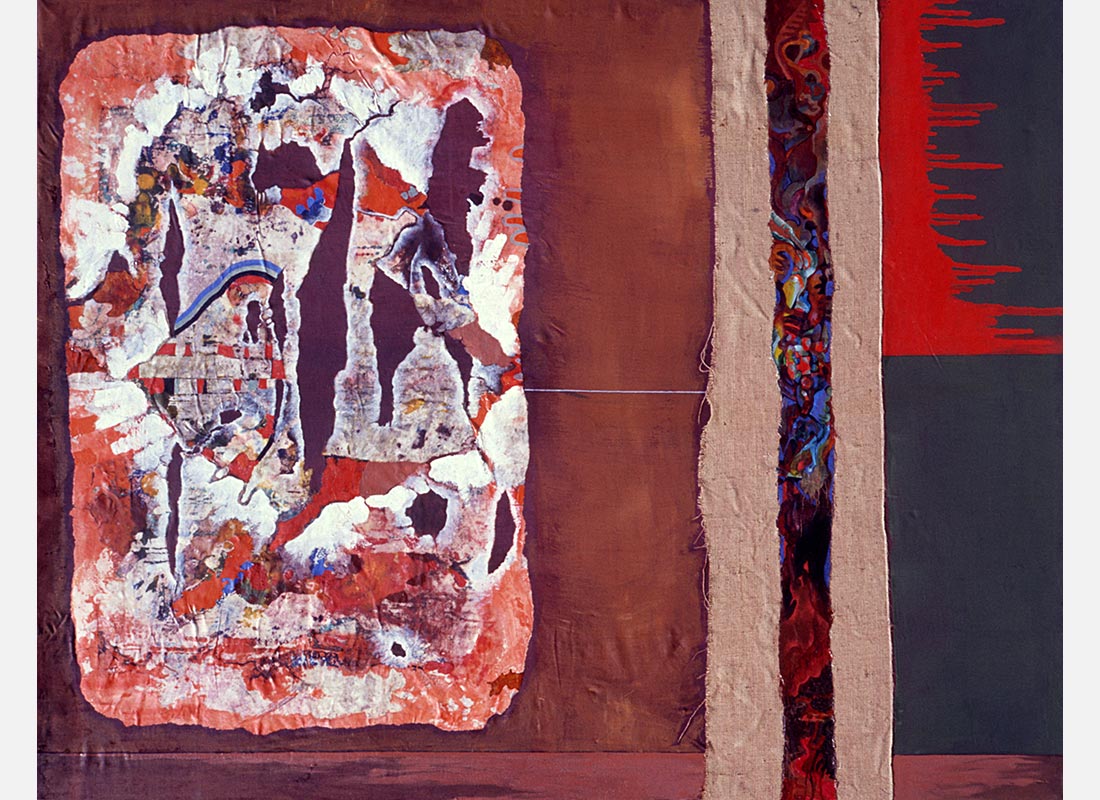 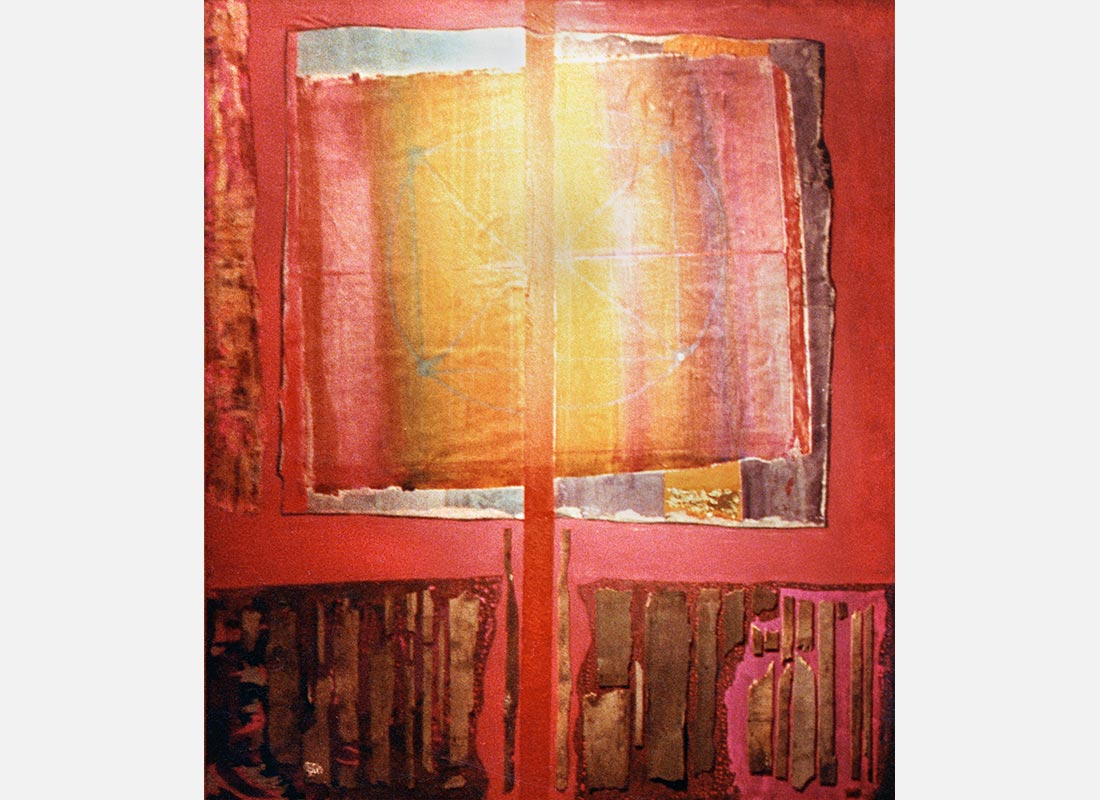 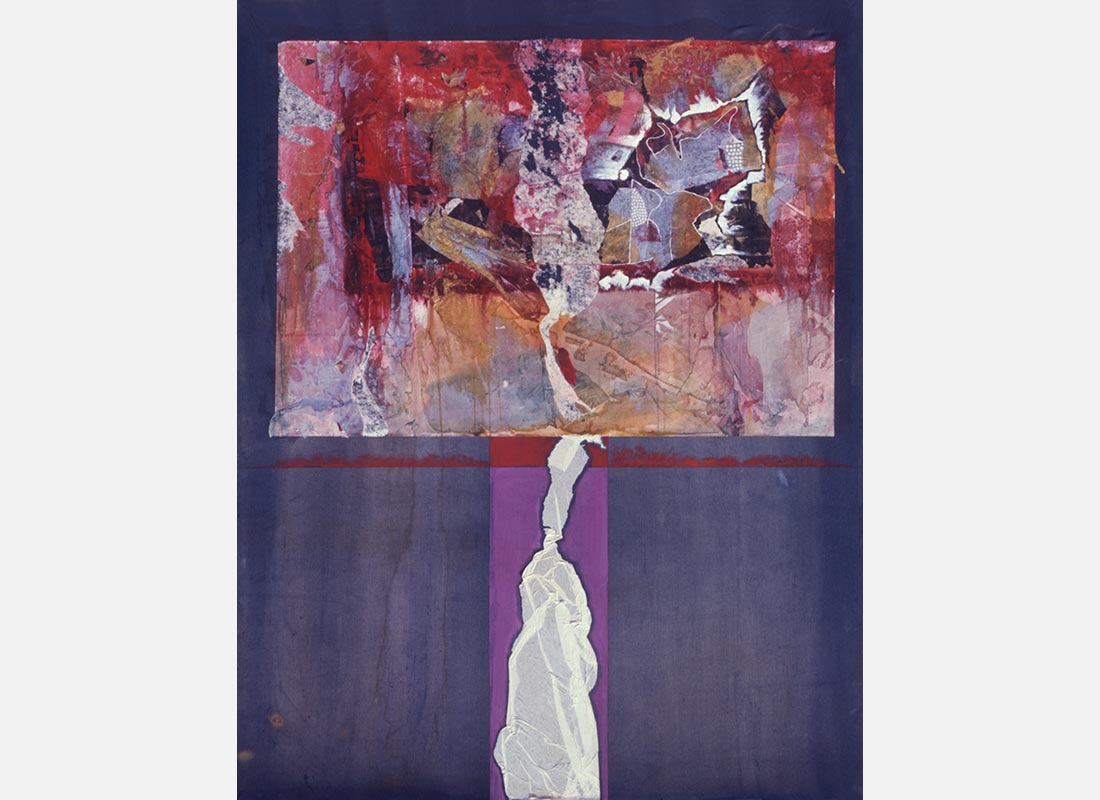 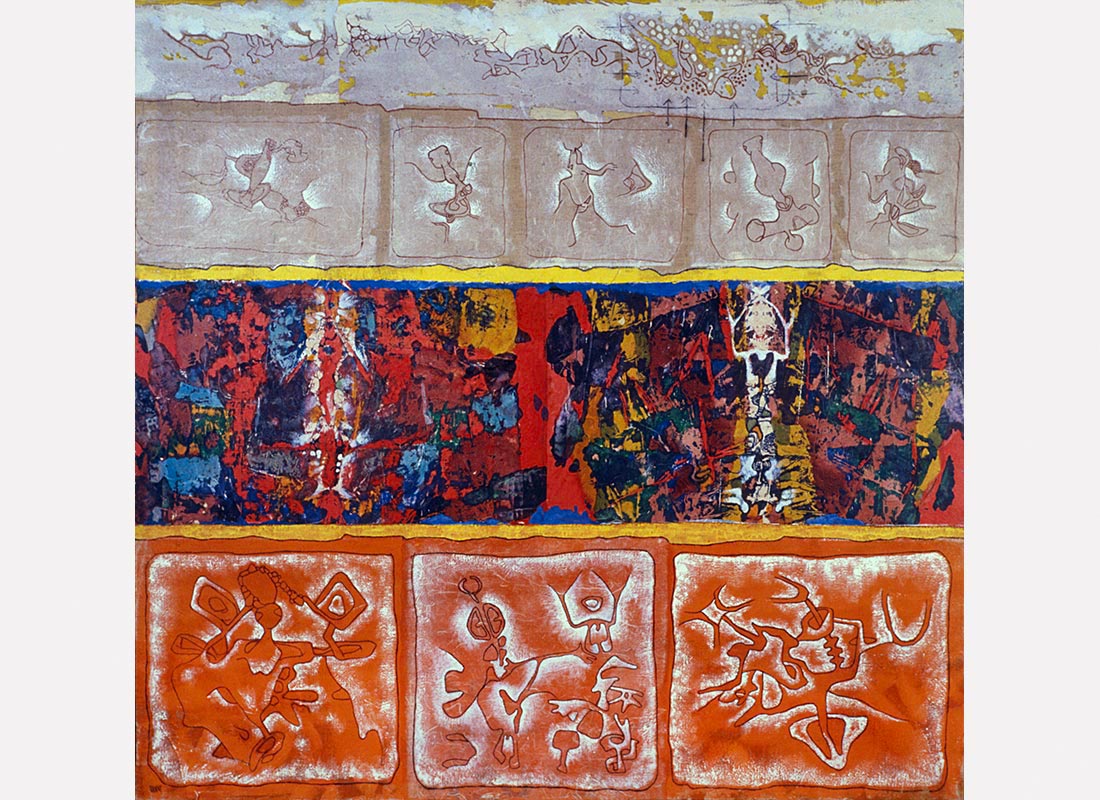 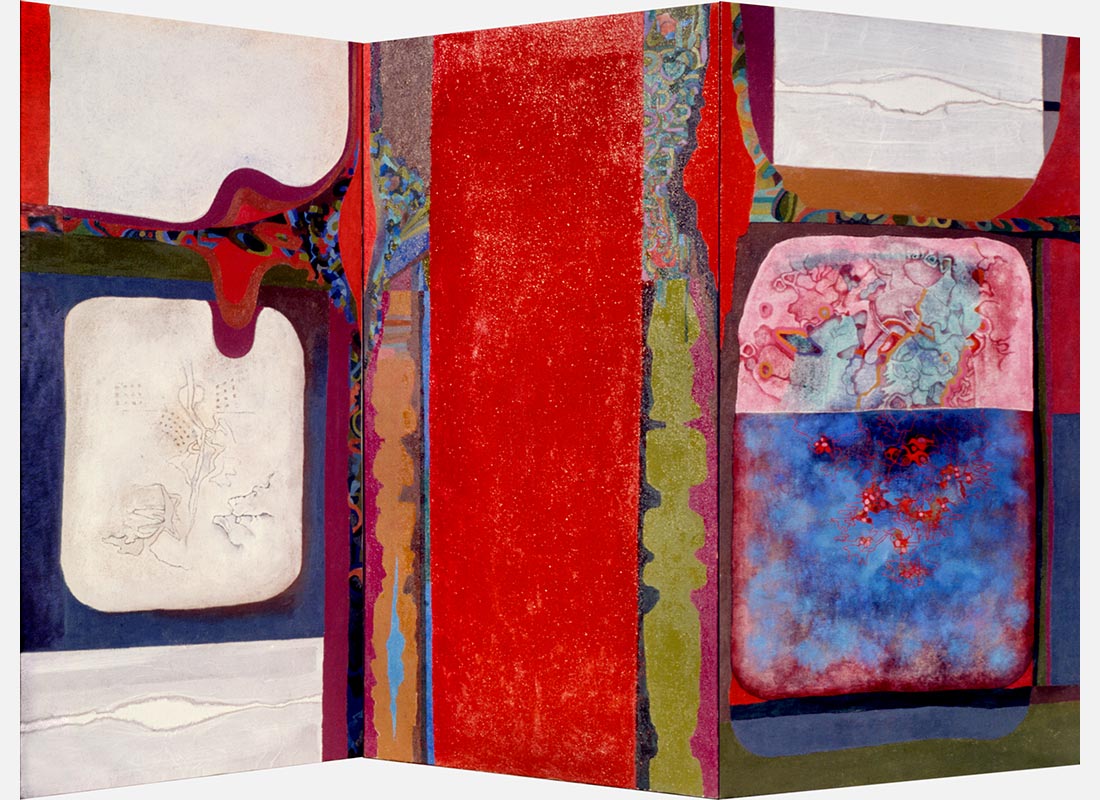 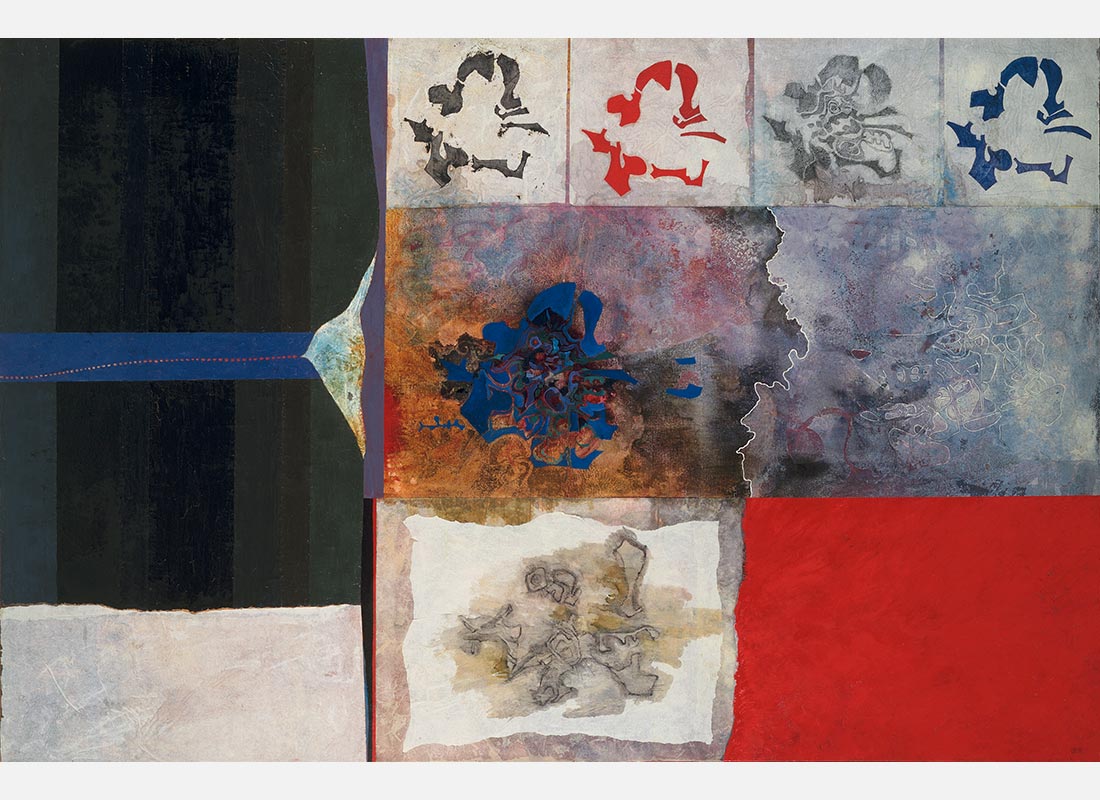 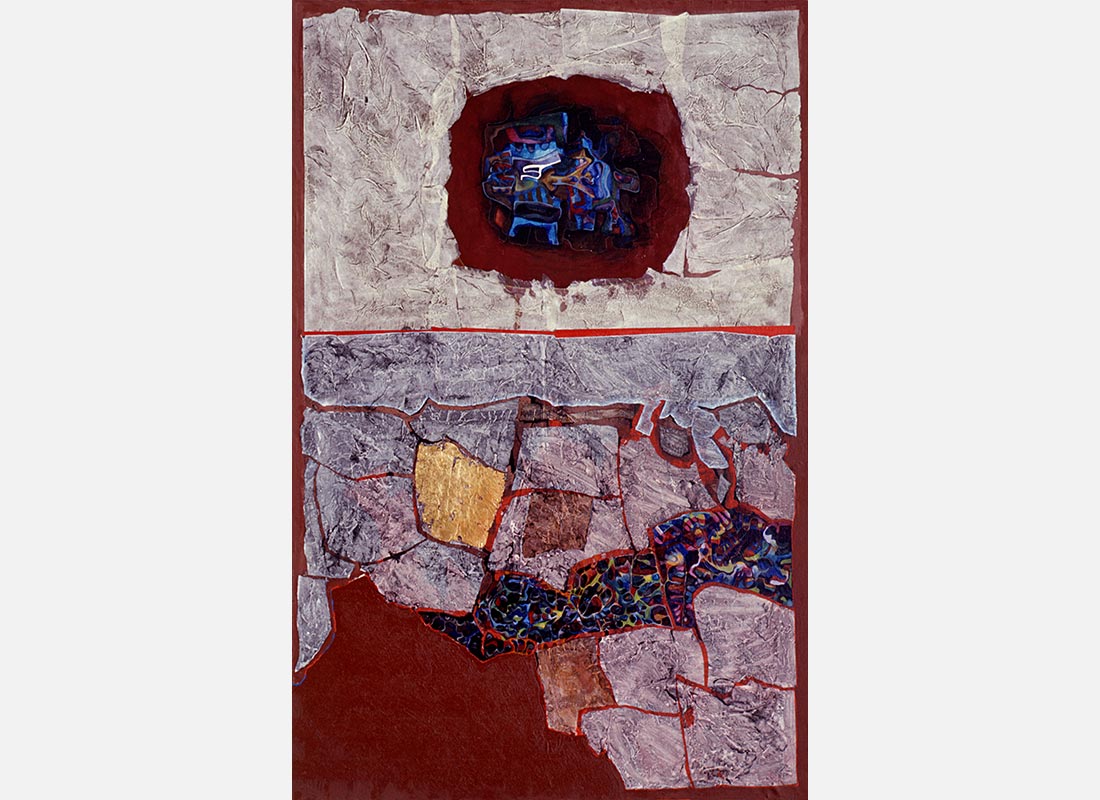 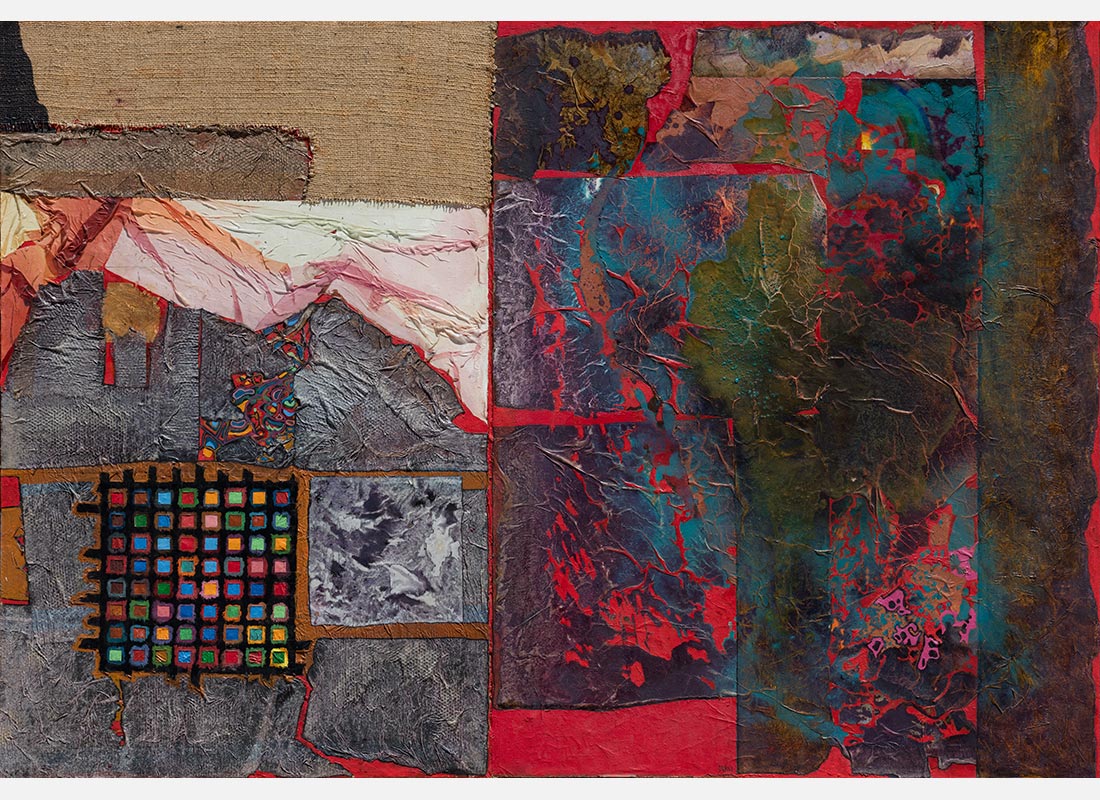 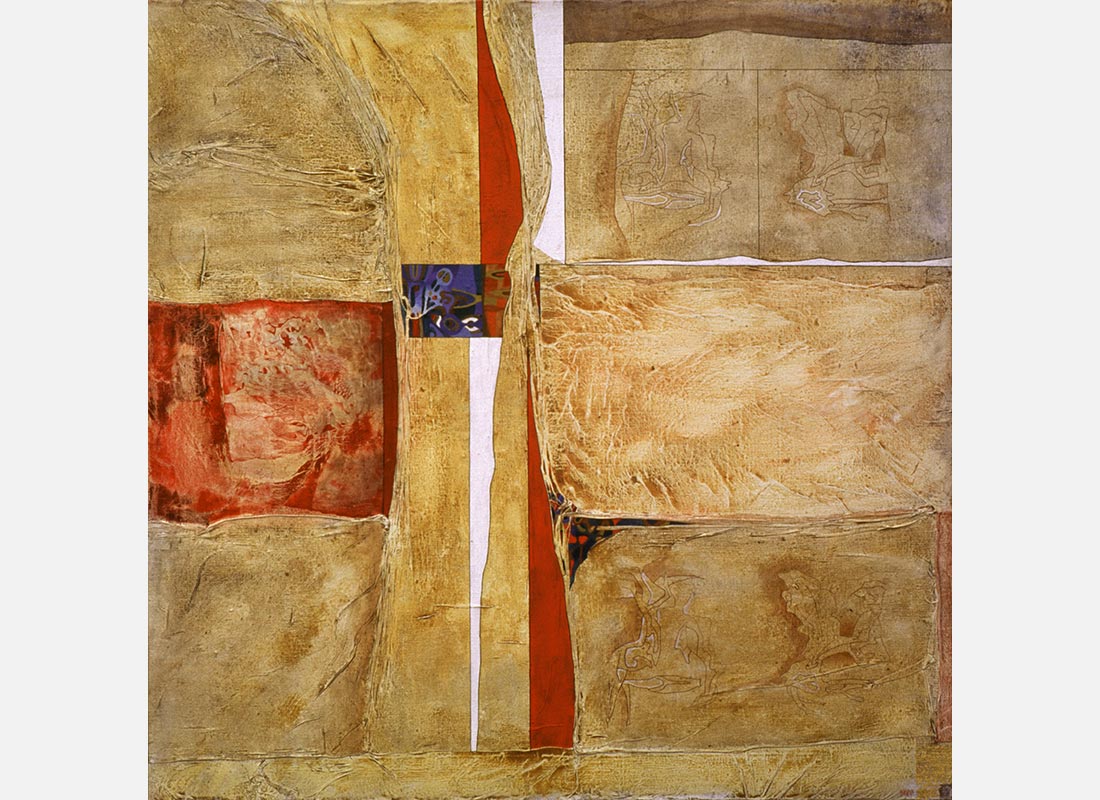 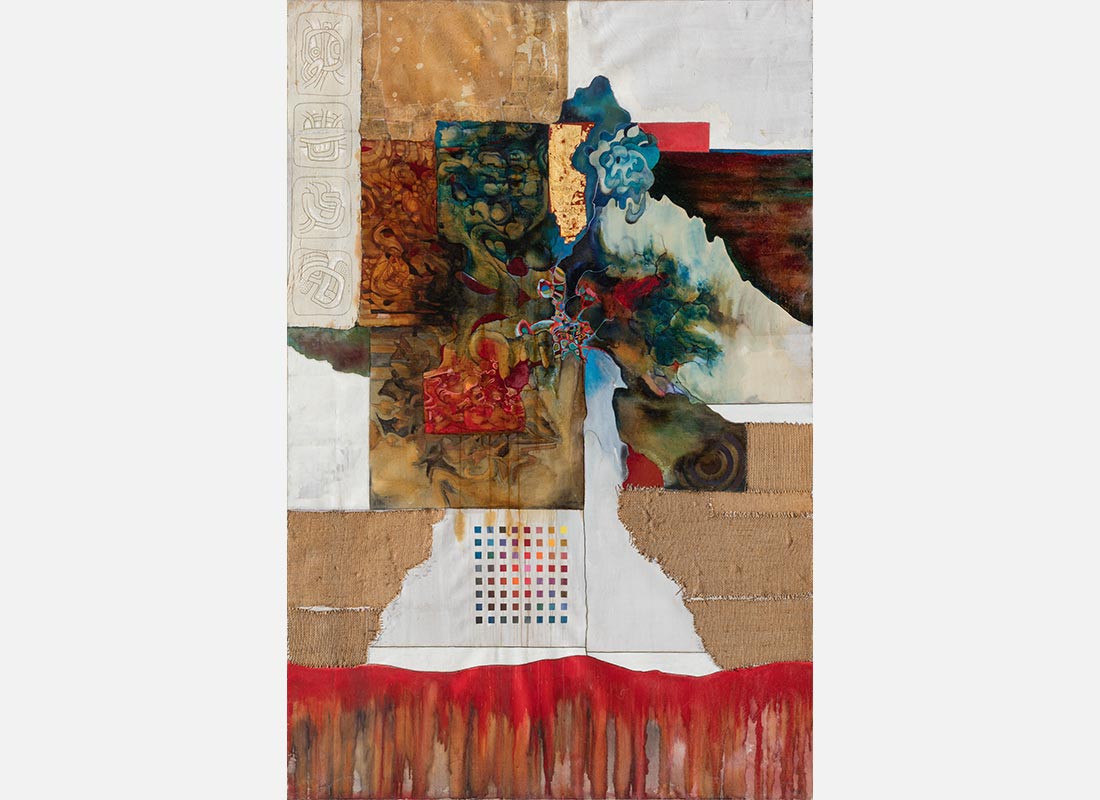 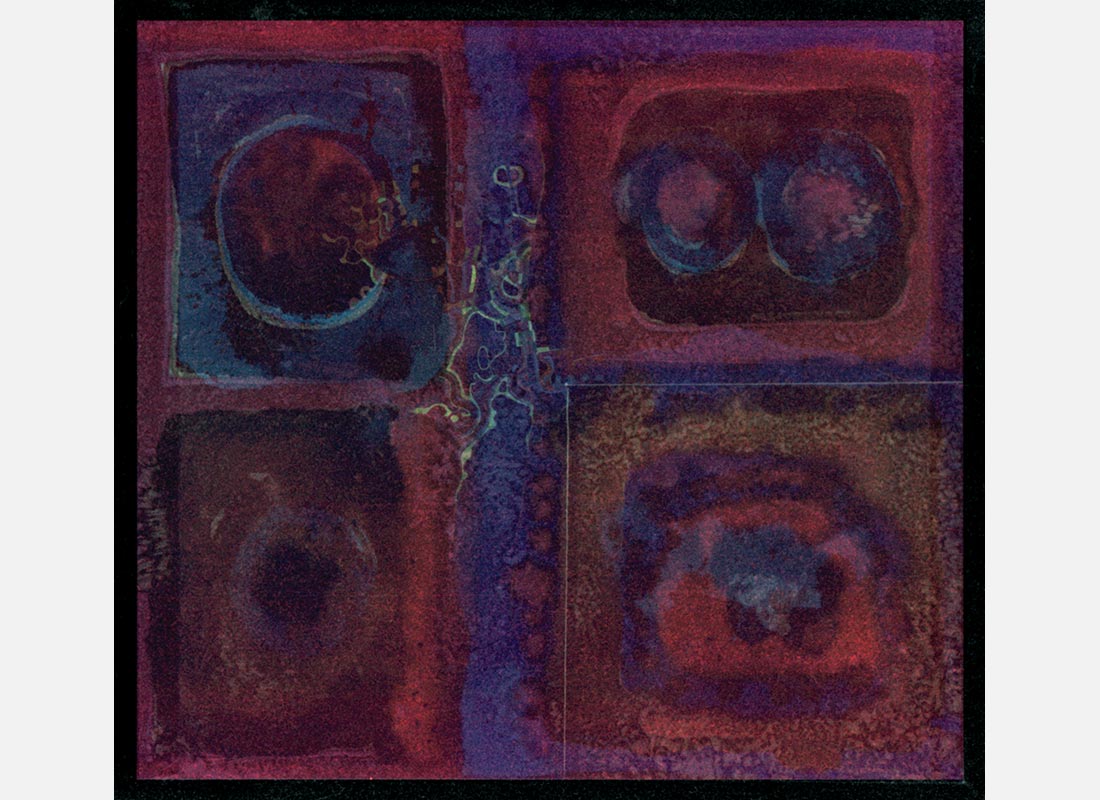 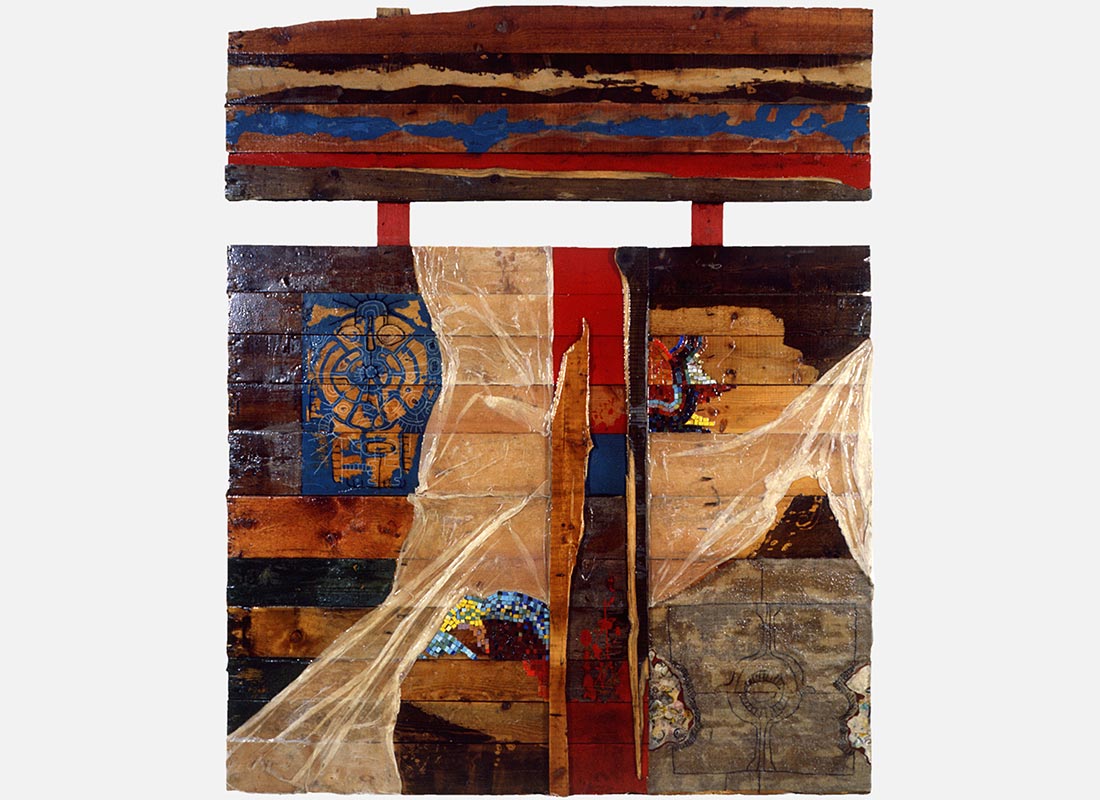 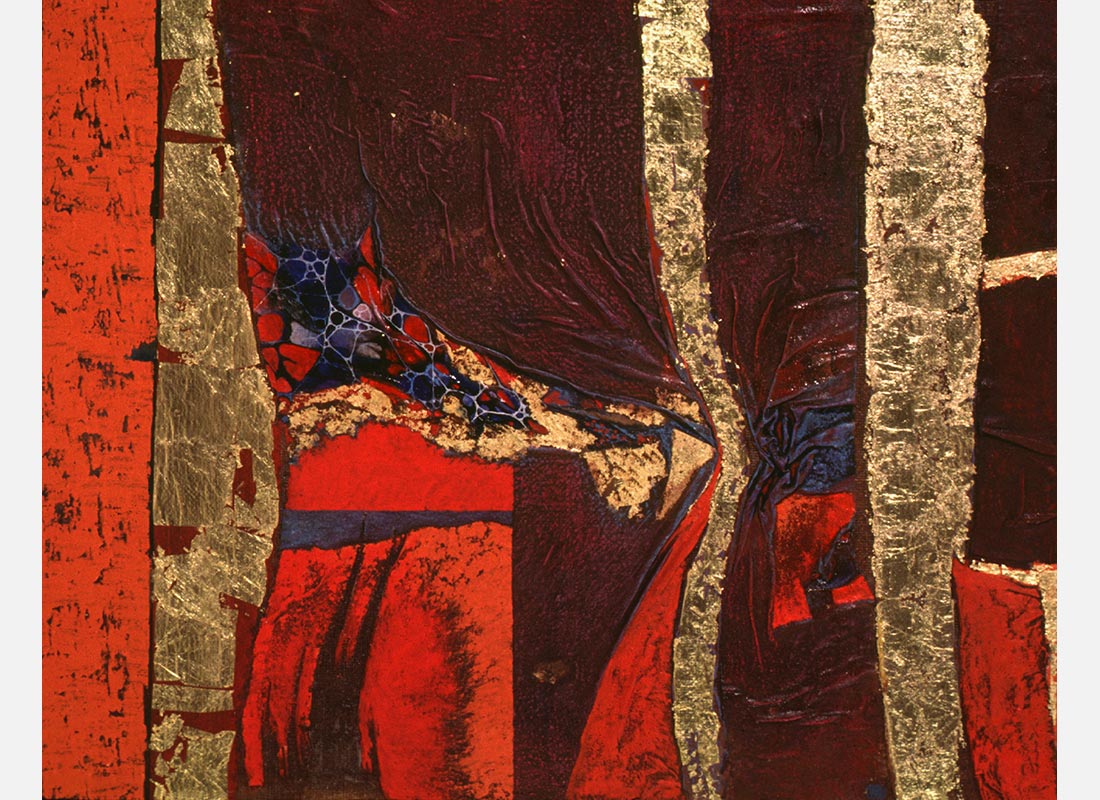 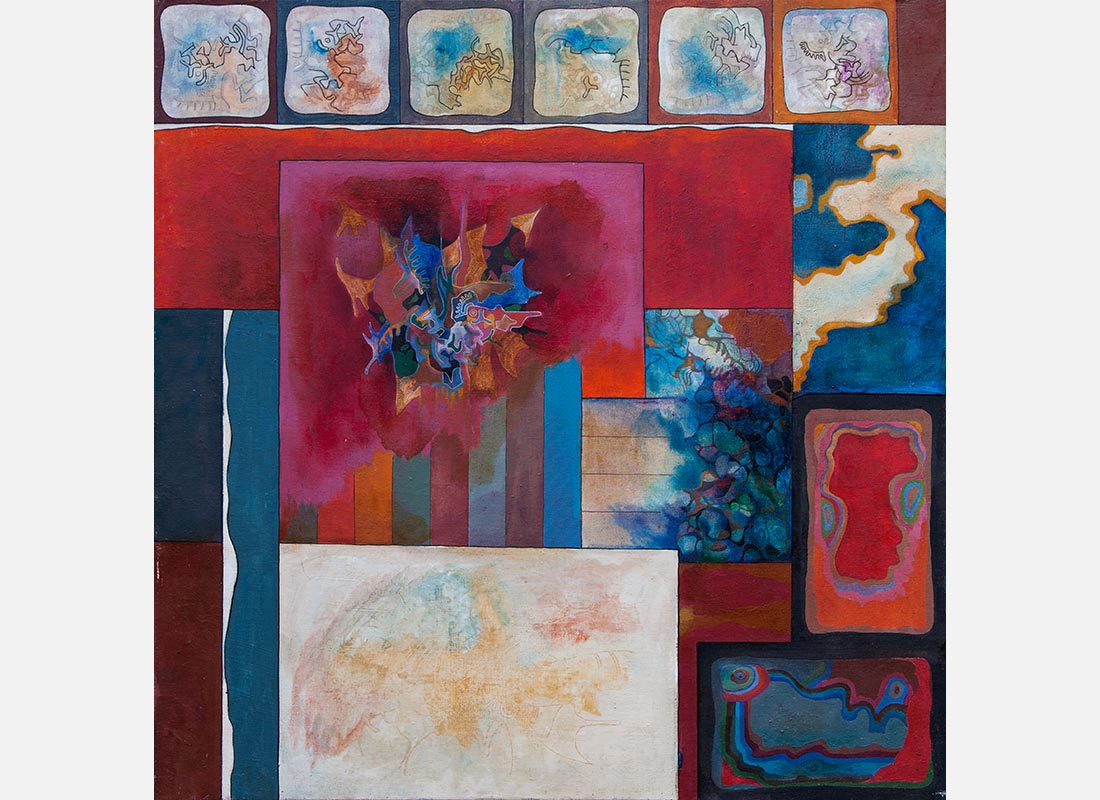 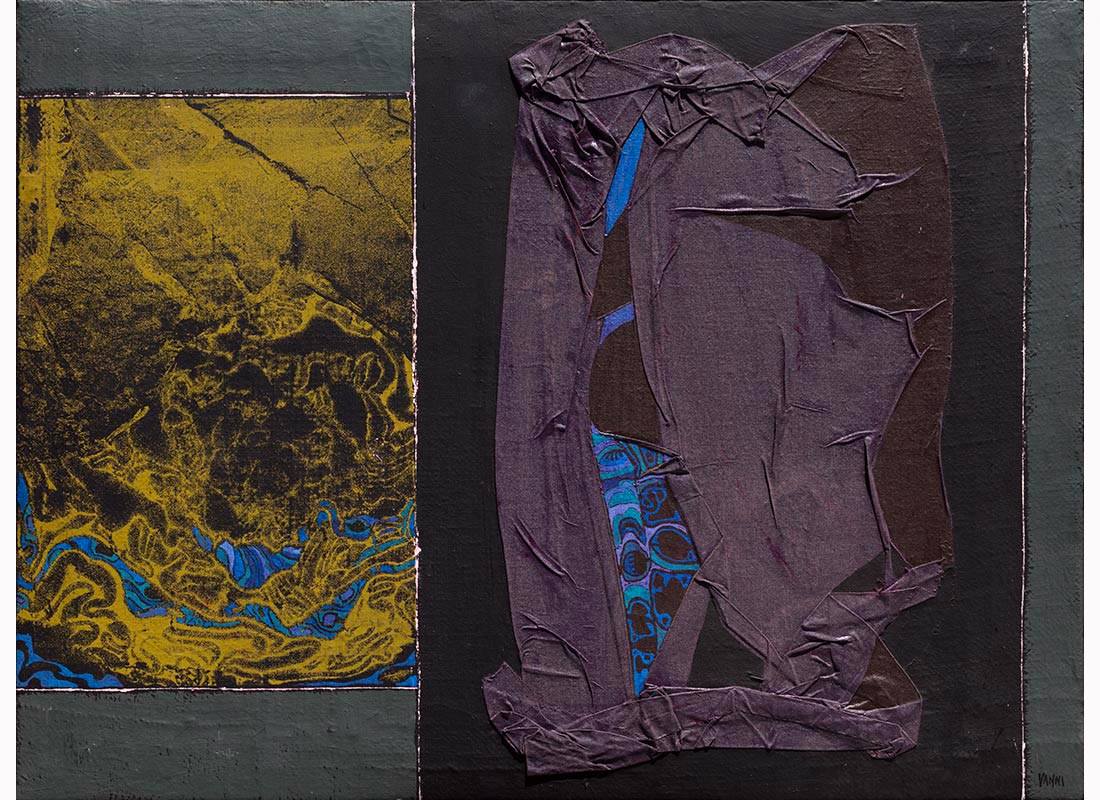 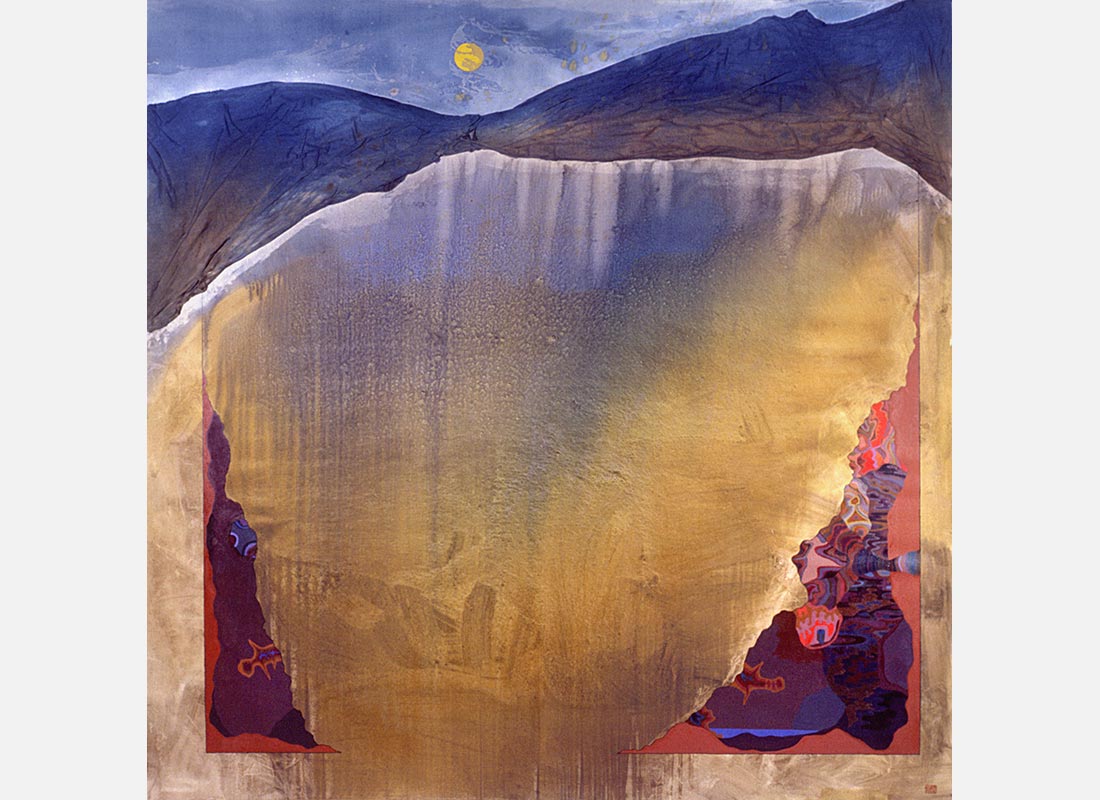 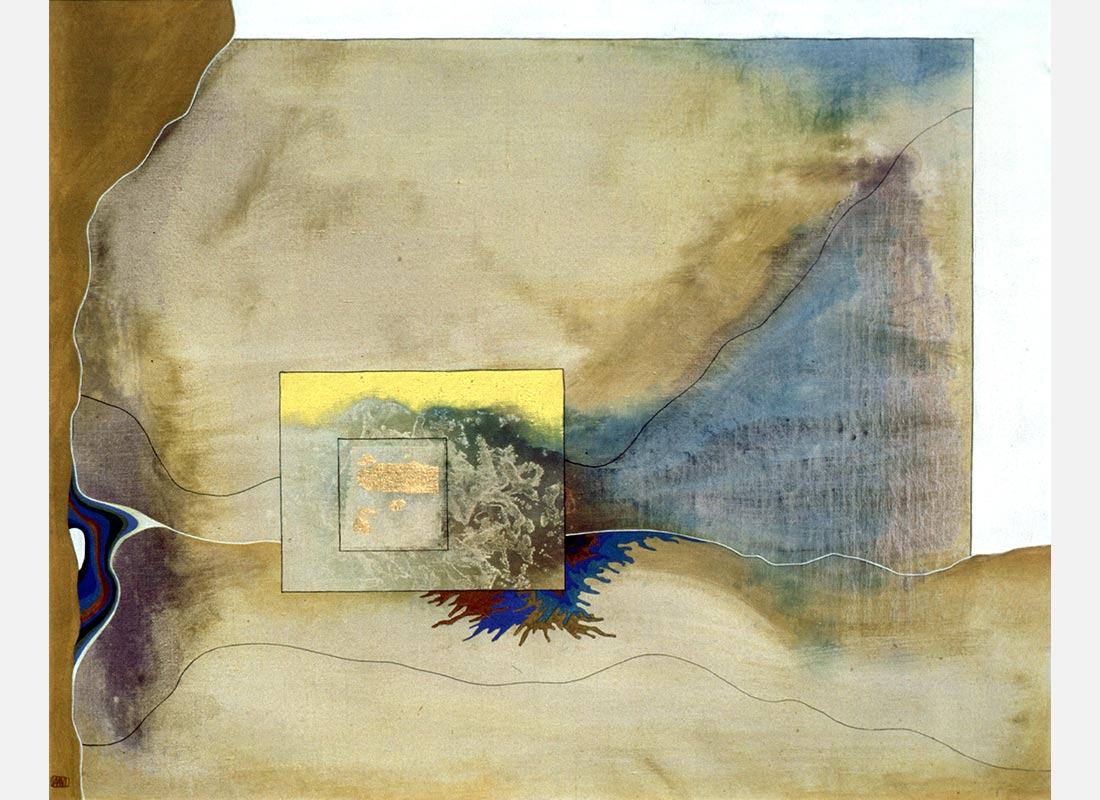 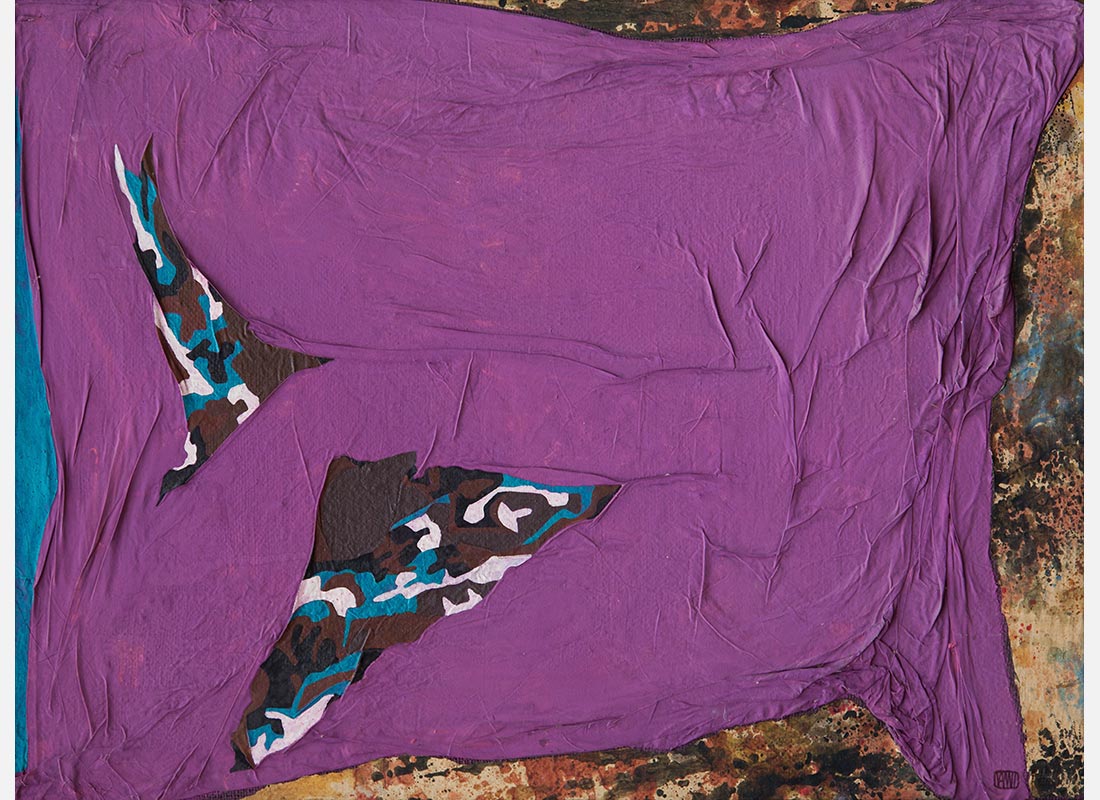 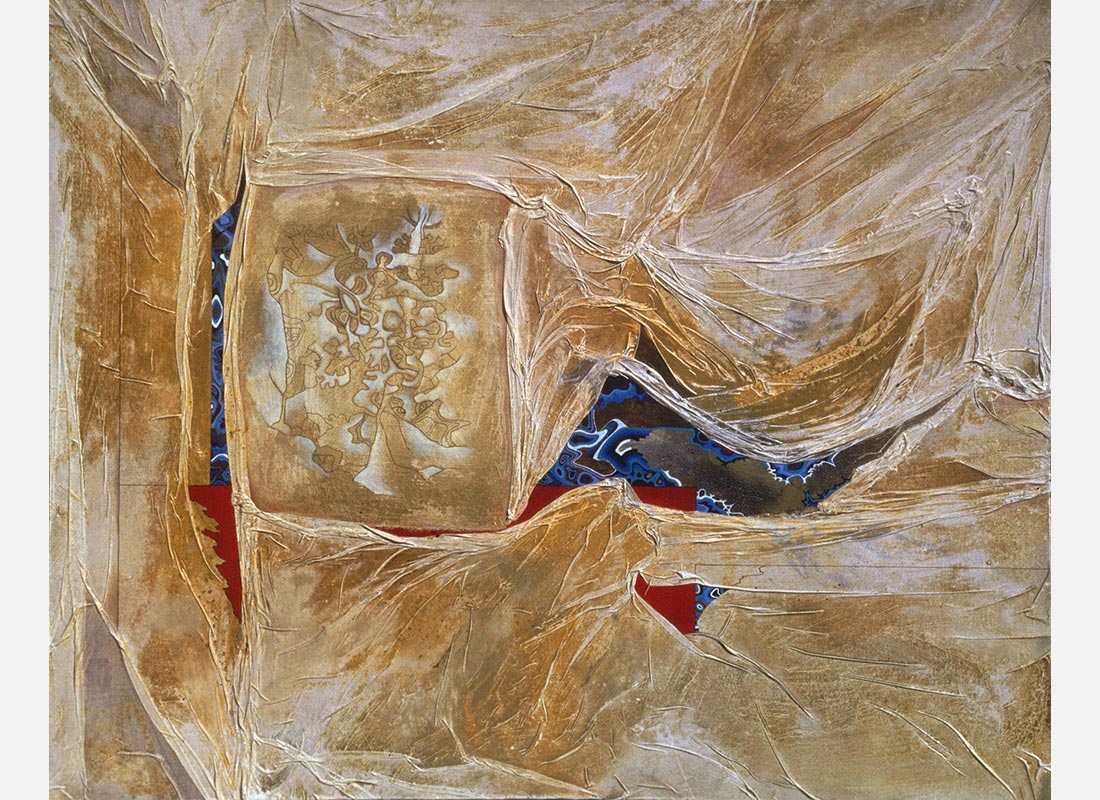 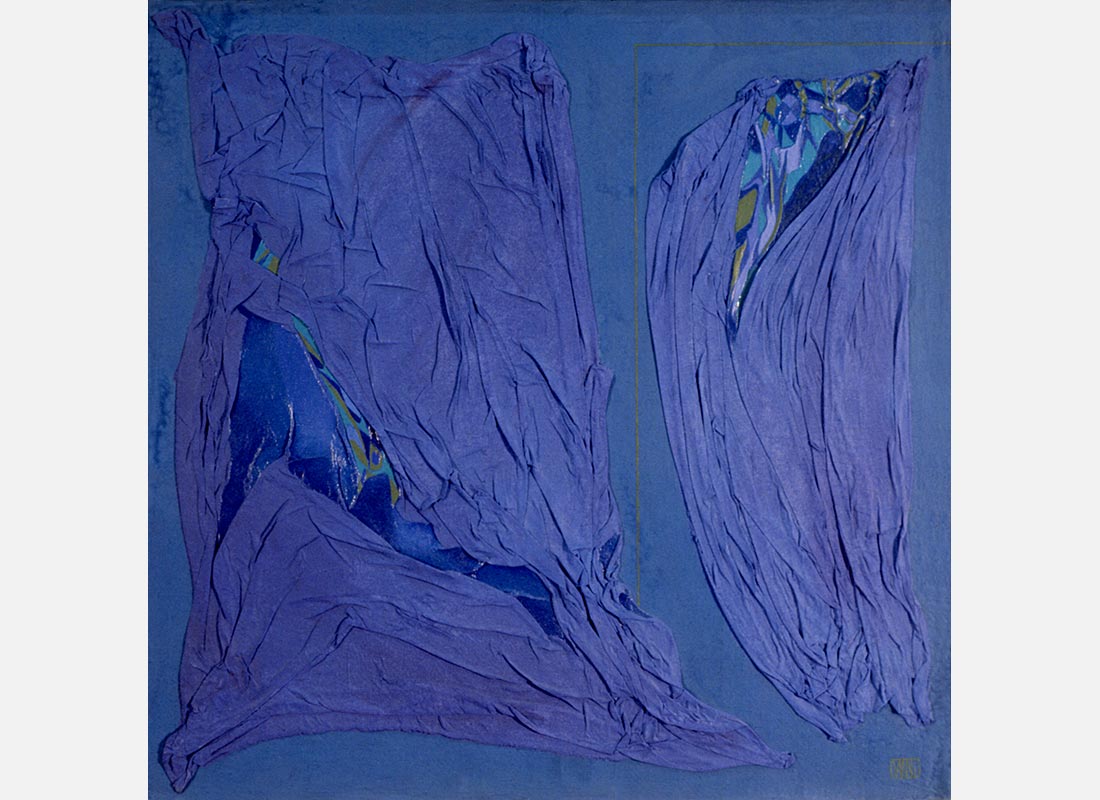 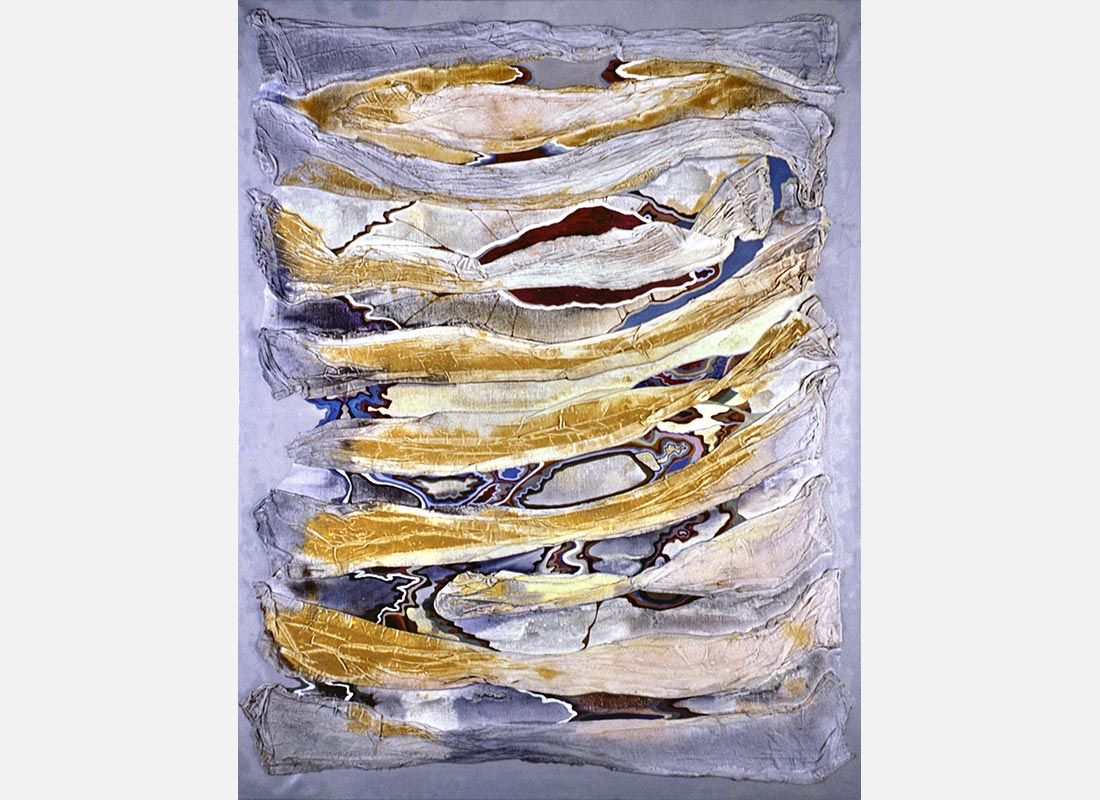 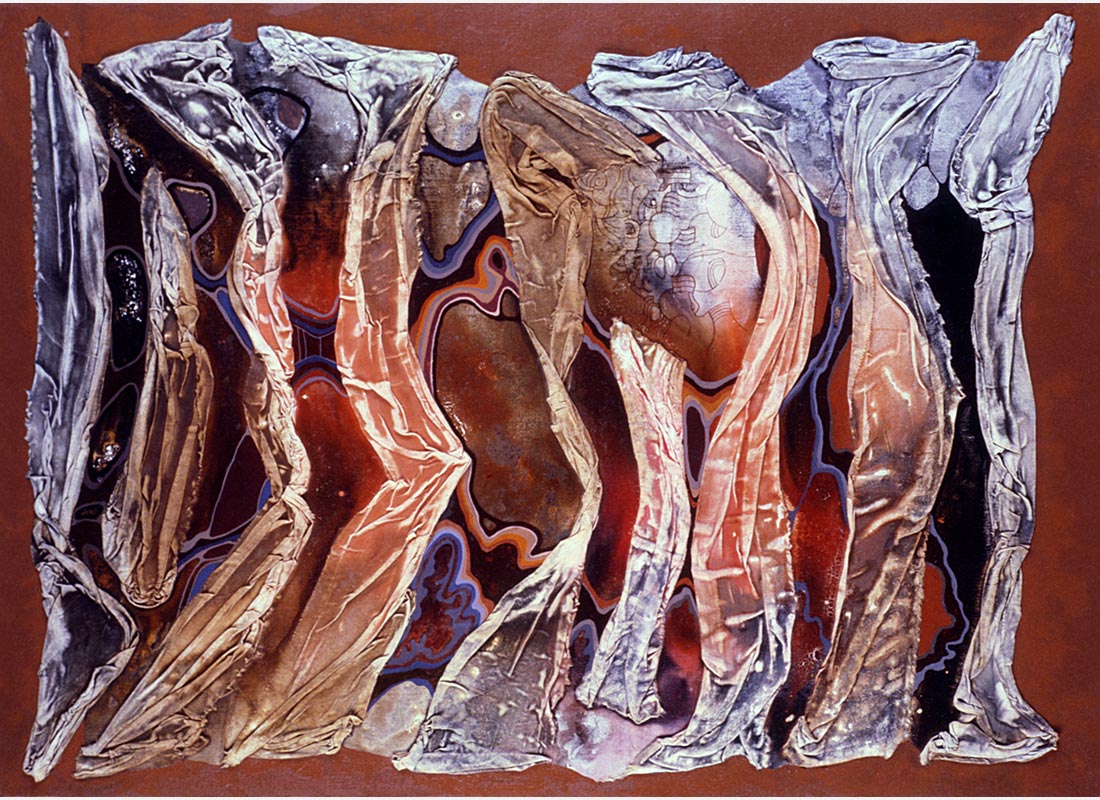 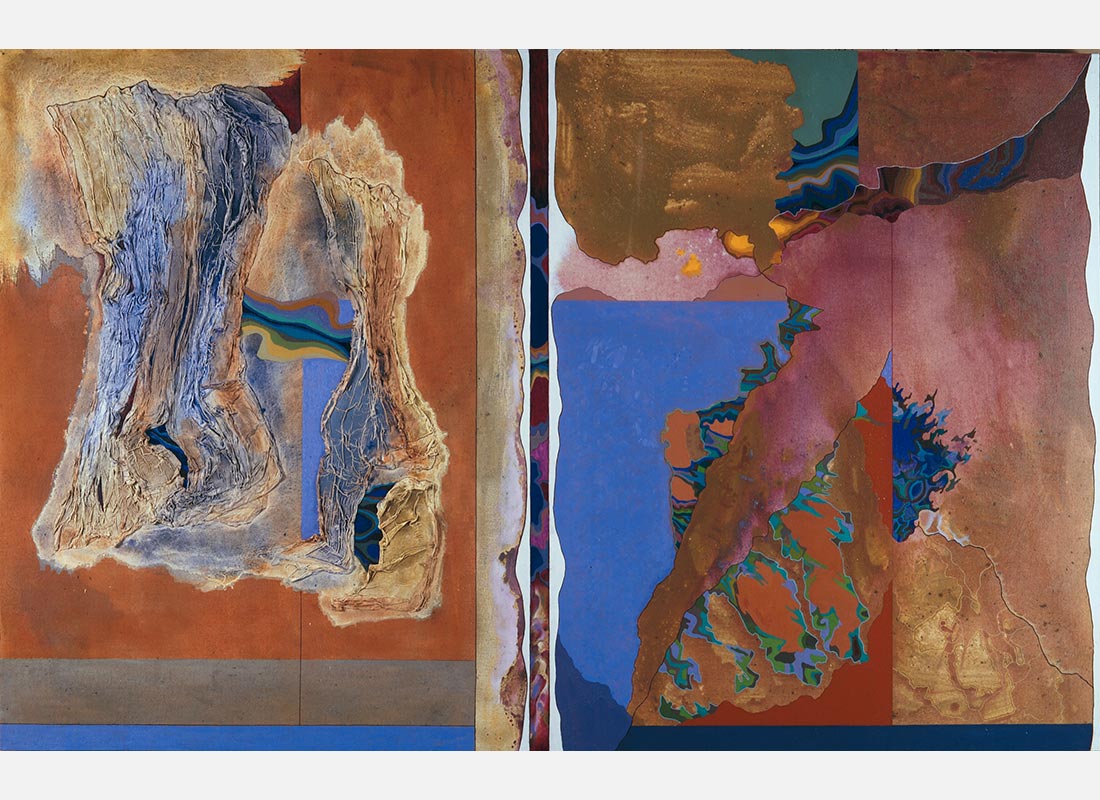 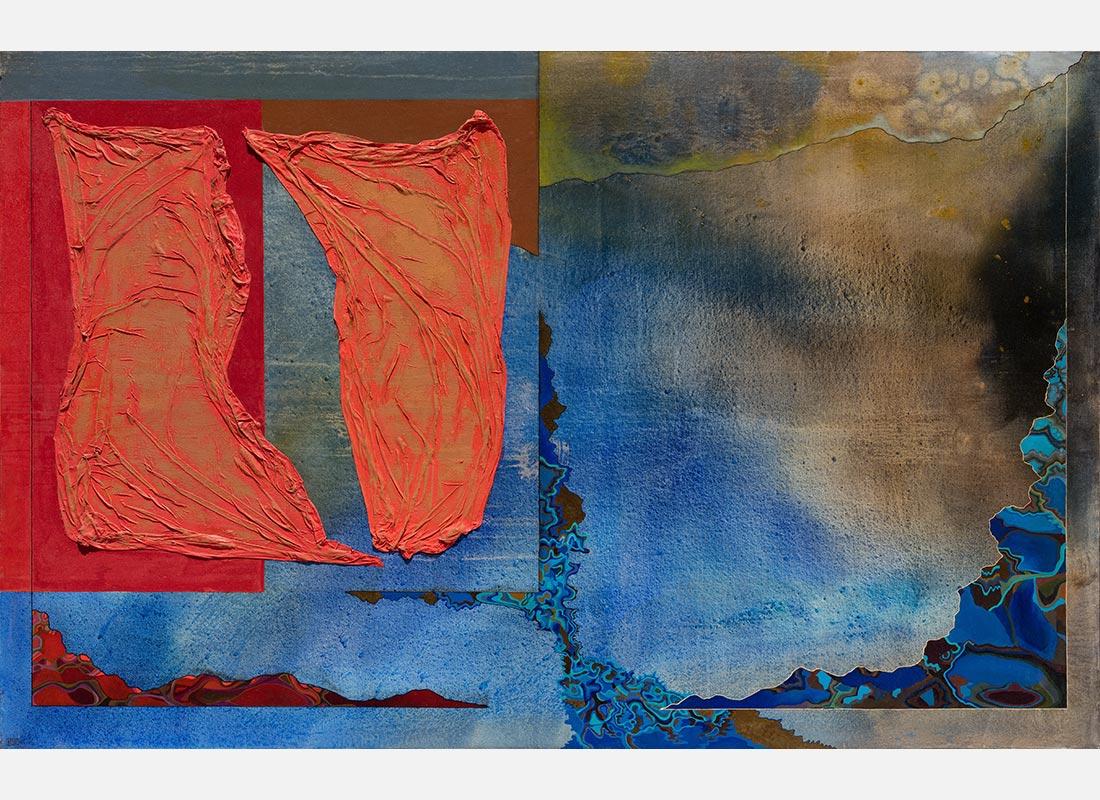 After a couple of years of extra-pictorial experimentation Vanni came to a decision to return to painting. In fact, without negating the validity of other creative hypothesis, he came to accept that he found it more interesting to create imaginary worlds through pictorial means. As Vanni would later say: despite all but unlimited freedom, which I gave myself to be able to wander from one medium to another and to mix them all together, I realized that for me, what I was able to invent within the context of a canvas remained more fascinating and mysterious. In his first works that marked his return to painting, Vanni’s figurative world is reduced to essential elements. For him this reduction to essential elements represented a decantation, after the extra-pictorial experiences of the recent past, and it led him to a clear awareness of the path he would follow. Before long he began reviving fragments of works he had made and destroyed to create images and passages for his films. He reconstructed other canvases where discontinuous elements are juxtaposed. Thus he picked up the thread of his interrupted pictorial discourse and resumed making multiple canvases, developing possibilities of multi-linguistic and eclectic readings.

Vanni’s work began to be characterized by increasingly multi-faceted activity. He developed parallel themes, working on many canvases simultaneously. Each focus on a specific aspect and at the same time has something of the others, in a mutual cross-pollination of old and new elements. From this point on it becomes impossible to subdivide Vanni’s work into distinct phases, according to a precise temporal progression. While thematic groupings are possible, they are always contemporaneous with many other directions.

Memory becomes his …personal museum (which forgets, and remembers, and undoes, and associates – at its own pleasure), where stimuli, forms, spaces and recent and past experiences encounter each other, like a sort of archive to be drawn upon each time a new work is begun. Once revived, images acquired at different times and in different places exist on the canvas in the same temporal space. Through memory, then, the coexistence of multiple and contrary elements becomes possible within a single canvas. This concept of memory has its origins in Proust, whose work Vanni knows intimately and which has served as a meaningful point of comparison for the conceptual framework of his own art. Indeed Vanni’s work can be seen as a pictorial transposition of Proust’s concept, whereby only in memory can one simultaneously perceive the continuous transformations to which time subjects' events, people and feelings. The ebb and flow of memory fragments, simultaneously the same and yet different because revisited from a different viewpoint, create a sense of growth in the paintings, where each work represents a development of the one that came before.

Il grande muro dei ricordi / The Great Wall of Memories is a great example of this concept. The canvas is filled with anthropomorphic tangles, painted as if they were a preparatory sinopia drawing put down at spatial intervals, recalling the great medieval fresco cycles. This allusion to a constituent phase of the work is emphasized by the presence at the upper left, on a section of raw canvas, of the sketch of one of the shapes from the lower sections. In the right portion of the painting, however, this same image is painted in completely different fashion, in polychrome, recalling the playful aspects of Vanni’s paintings from ‘68.

Vanni start using as well different materials, seen previously in his non-pictorial works, but now the practice acquires a predominantly pictorial value. He creates palimpsests, where history and time have left their sign. The rag, the polyester, the scratched plaster and the wood planks are chosen for their pictorial qualities of color, surface and material.

The creative presupposition that material can be chosen and used in terms of its function in a broader figurative project often leads Vanni to contradict the material’s tactility, through the use of artifice. In some works, successive layers of torn drawings are glued one to another to obtain a dense bark with a quality more like papier-mâché than collage. The convulsed mass of this tangle is then covered in white, emphasizing the form that emerged. Glued pieces of cloth, saturated with color, reinterprets the glued drawings through the forms created by the folds in the fabric. The paint-saturated cloth acts like a film that has been creased and, in its pulling back, discloses the plane below. It is a sort of disheveled theater curtain that reveals forms and materials ready to take center stage, establishing a dialectical relationship between a physical and a pictorial reality.

The technique of glazing, which favors thickenings of paint in the flat areas of the canvas, leaving out the ridges of the rags, recalls the material treatment of the canvases from ‘63-’64, where consistent brushstrokes were then emphasized by a glazing that brought out their character. In many cases, the rags are arranged like brushstrokes, losing their material identity to acquire a truly pictorial value.

The series called stracci, or rag pieces, clearly revives the theme of a brutal laceration that reveals an underlying reality, central in all Vanni’s mature work. Whether this dynamic occurs in more evident manner through a physical entity such as the canvas, or through simulation by means of a purely pictorial illusion, for Vanni it becomes an occasion to enact the coexistence of different realities, dynamically opposed but connected by an internal logic that justifies their proximity. Writing about this process, Vanni states: Brutal laceration that uncovers (or rediscovers? or initiates?) other forms, that transforms it into inlay, or into a swarming of cells whose movement, compressed, folds back onto itself and is immobilized. These compositions have multiple morphological references, evident to varying degrees: the fracture in a rock from which lichens emerge; a deep wound on the skin that reveals the internal organs; often a clear reference to the female sex. Each composition has its own intrinsic coherence even as it incorporates different worlds. In no case, however, is there realistic figuration, and their morphology always remains ambiguous, leaving space for interpretation. This series of works, developed over a period of four years, from ’75 to ’79, allowed Vanni to reappropriate all the previous formal elements and themes into an experimental progression of work, through which he would acquire other components that would help in his future investigations.

In May ’77 Vanni had a large-scale retrospective of seventy-nine works from 1950 to 1977, including some thirty recent paintings. Two years later, in May ’79, he was presented in an exhibition at the Centre Culturel Français in Rome as an Italian artist who had begun his career in France. Despite the good outcome of both shows Vanni realized that the artistic life in Rome had lost for him the energy it had in the sixties. So, he moved to New York in the autumn of that year.