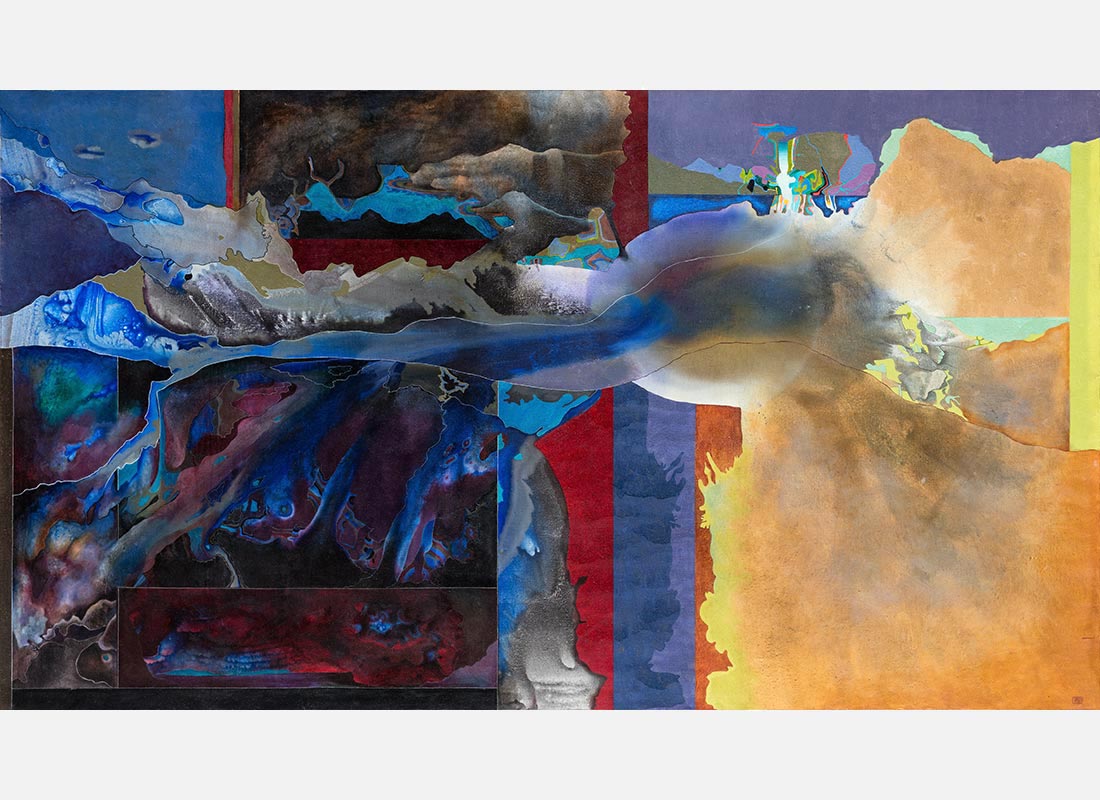 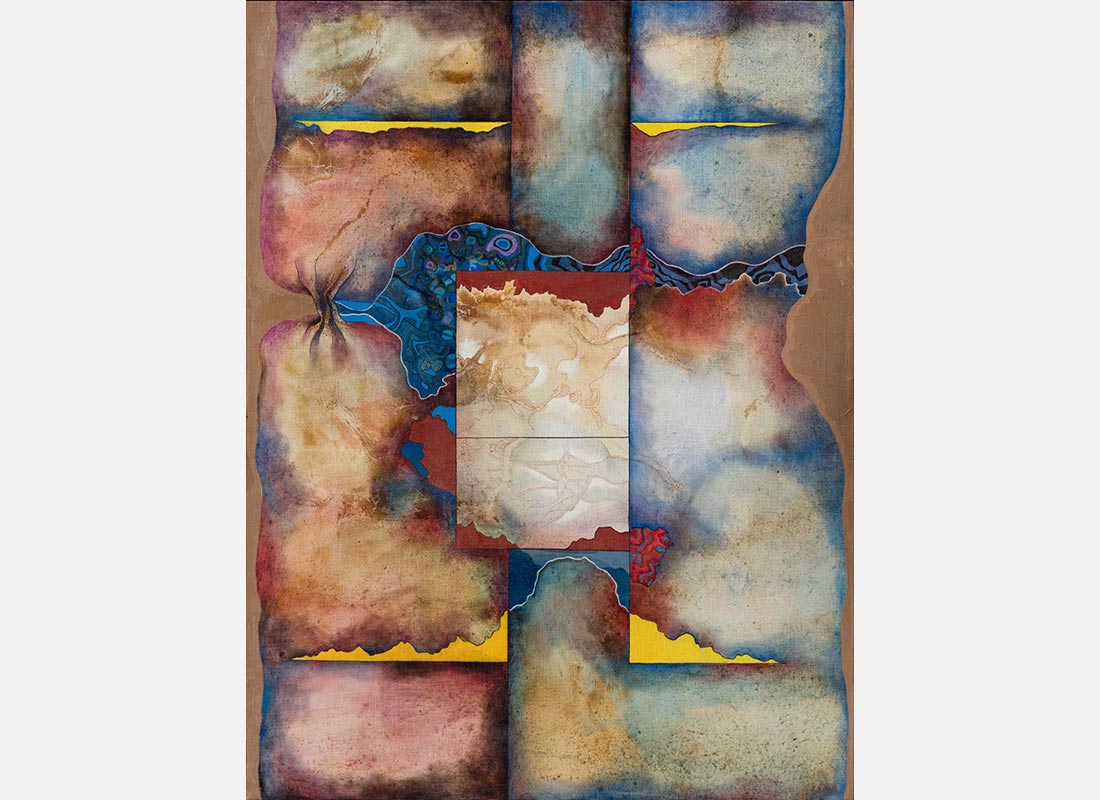 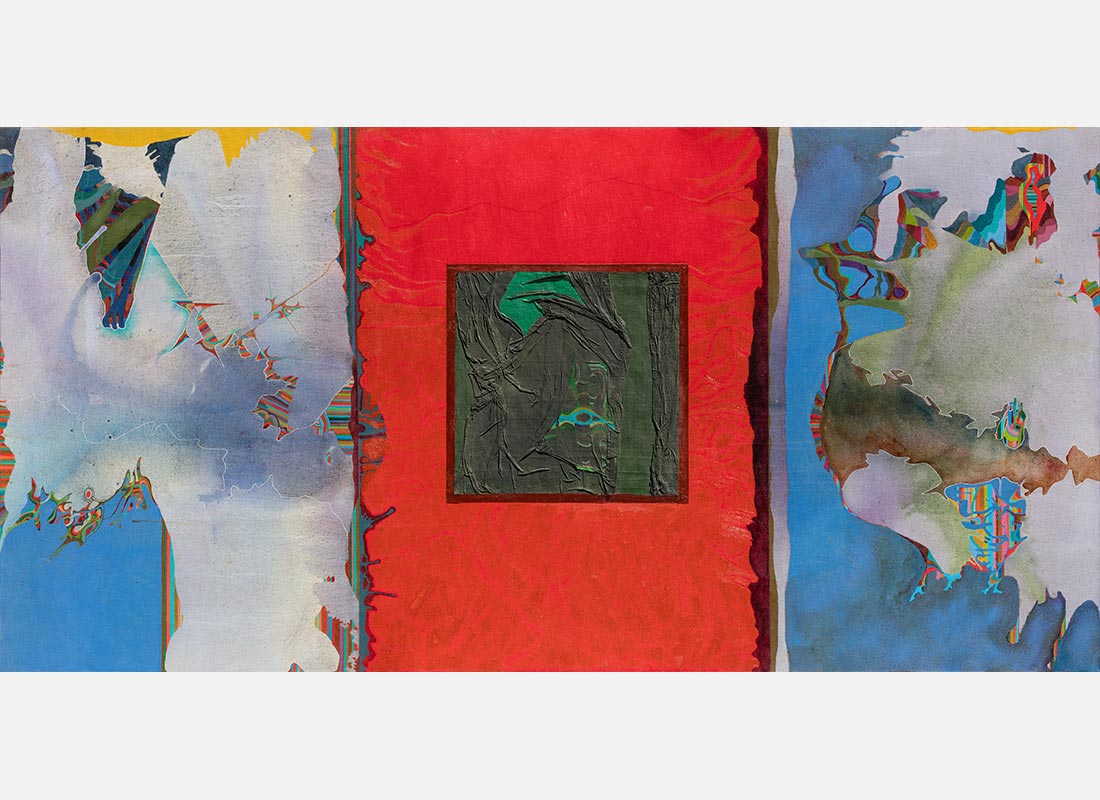 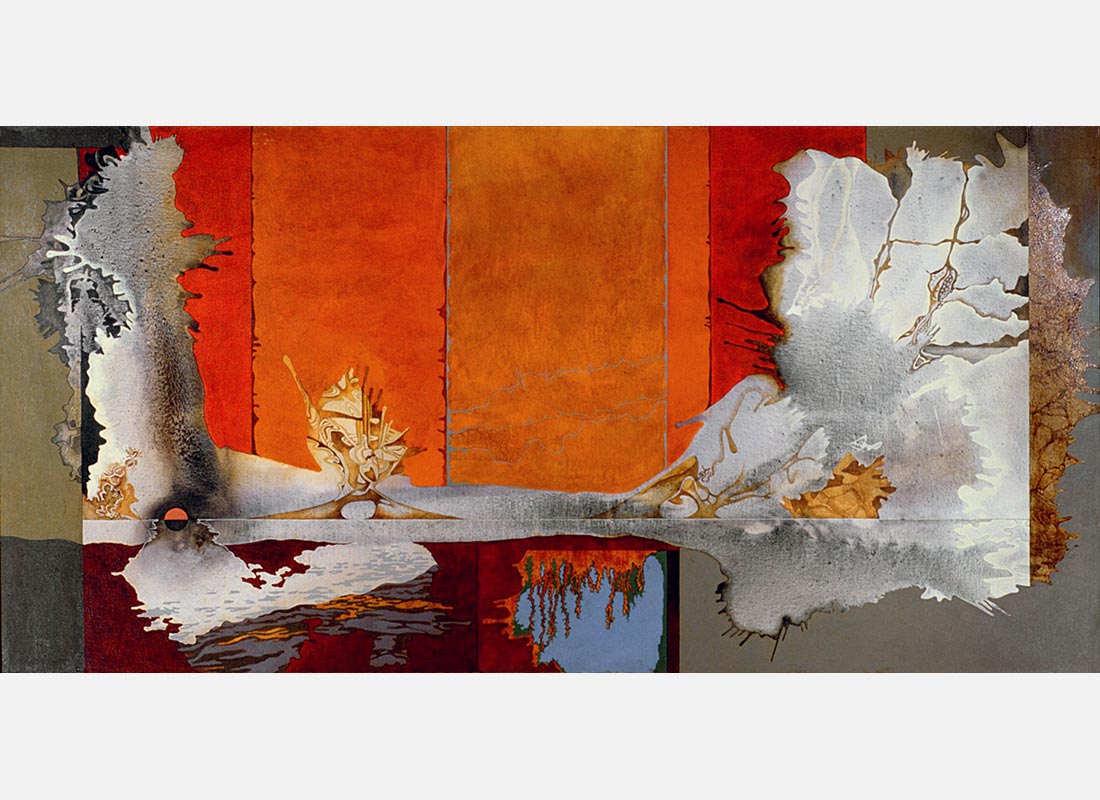 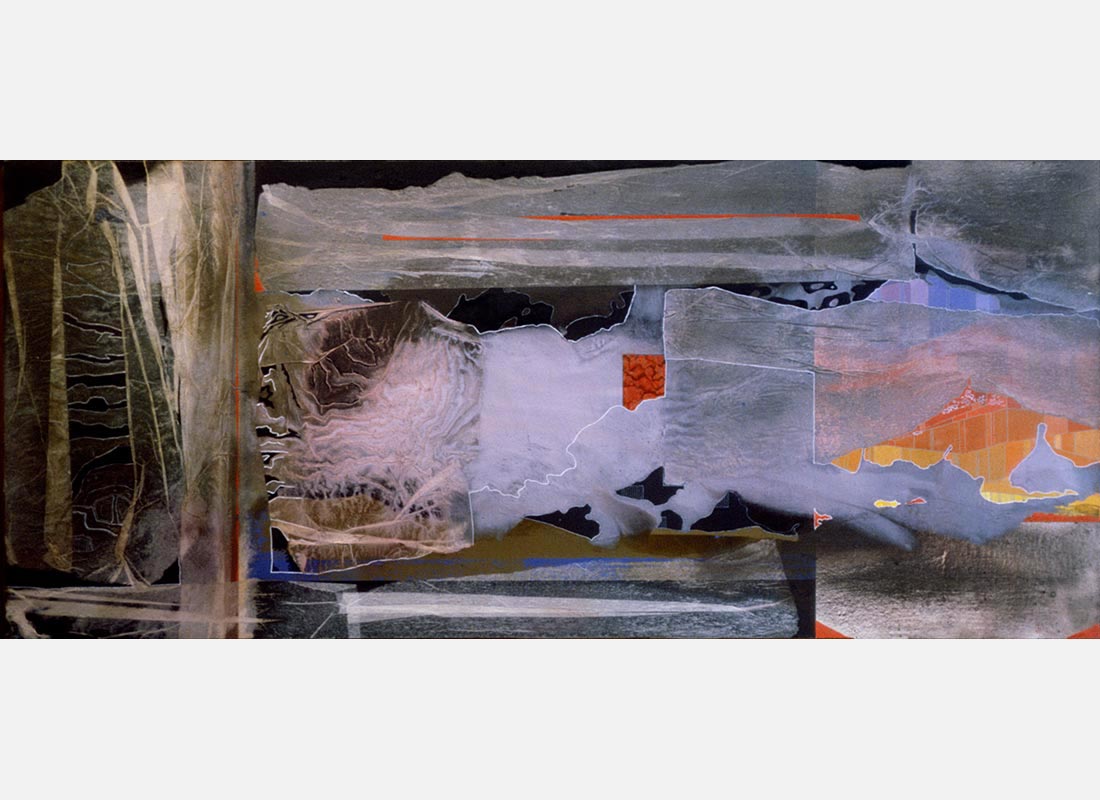 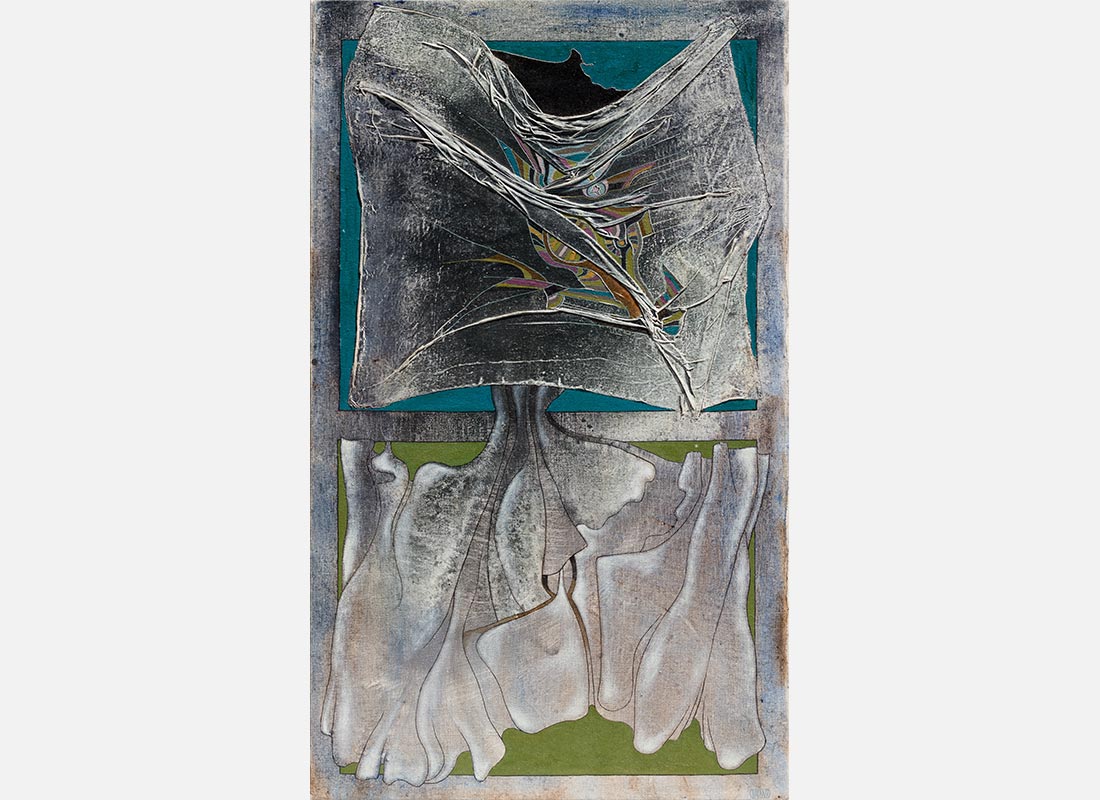 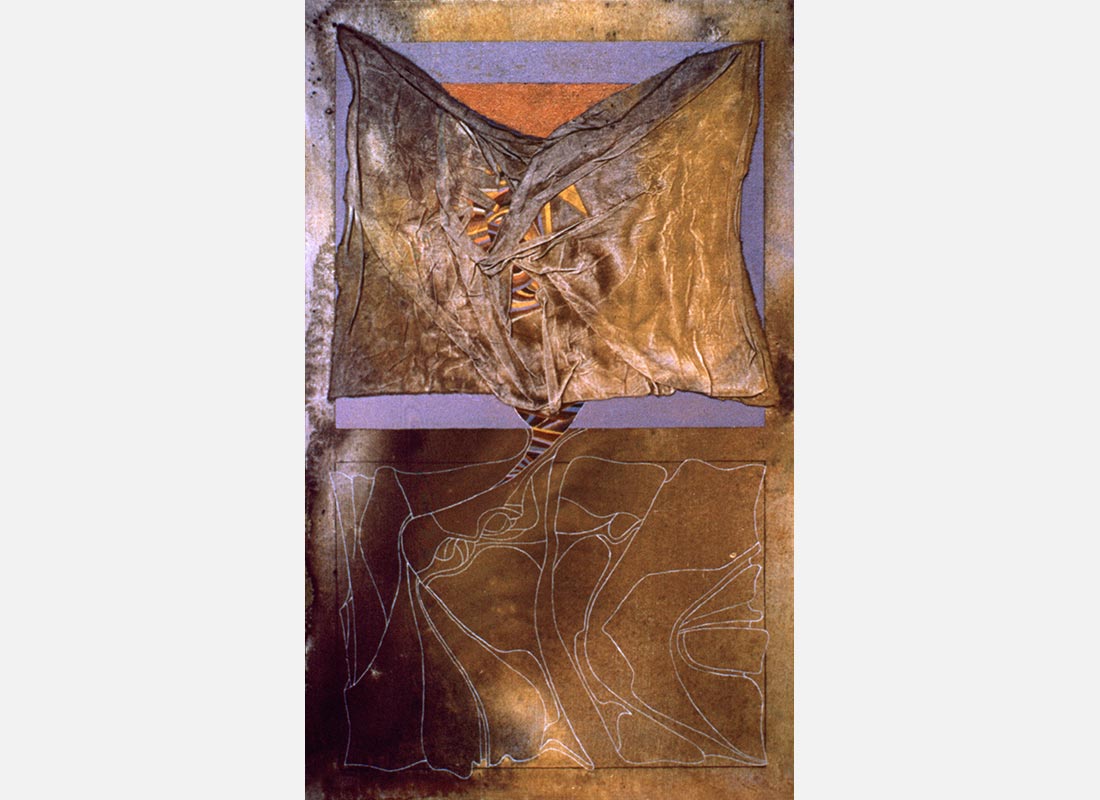 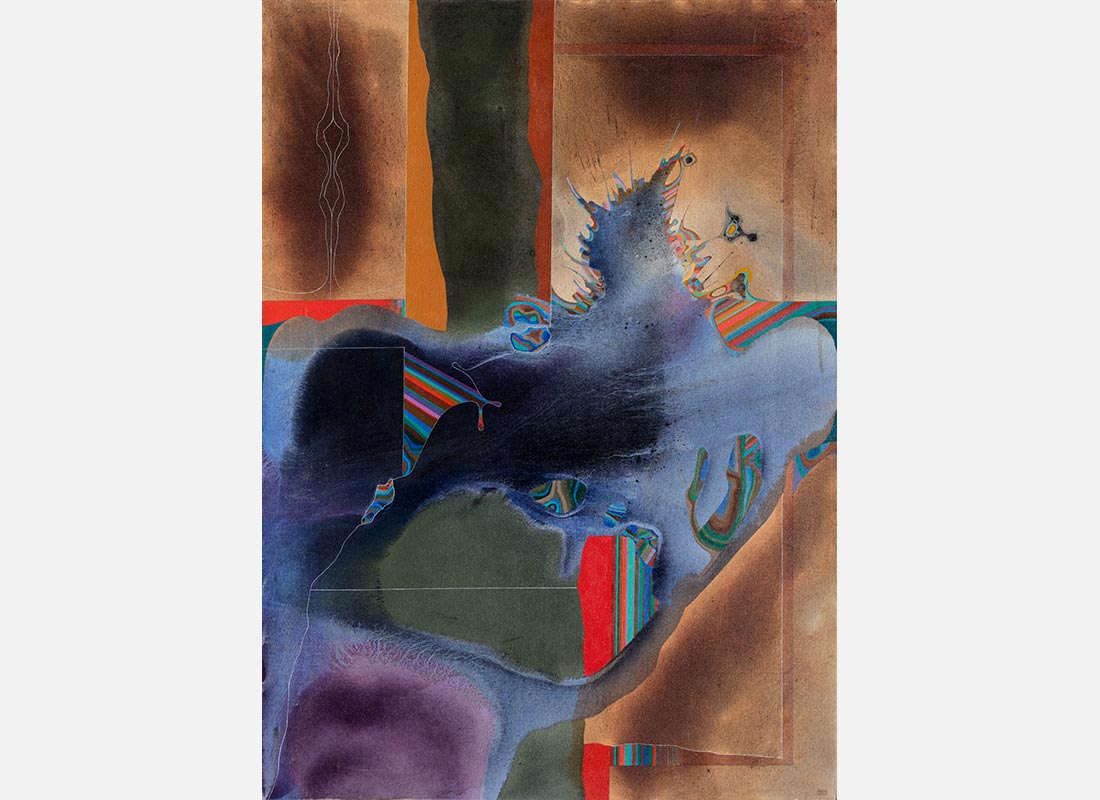 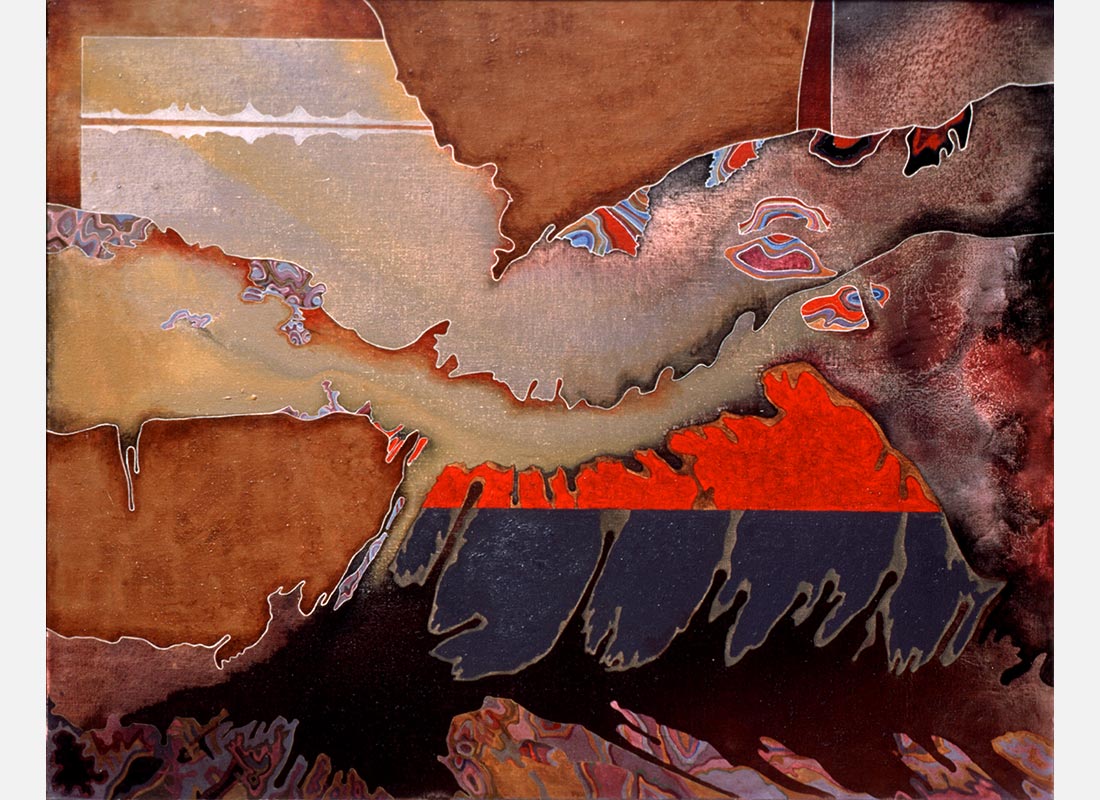 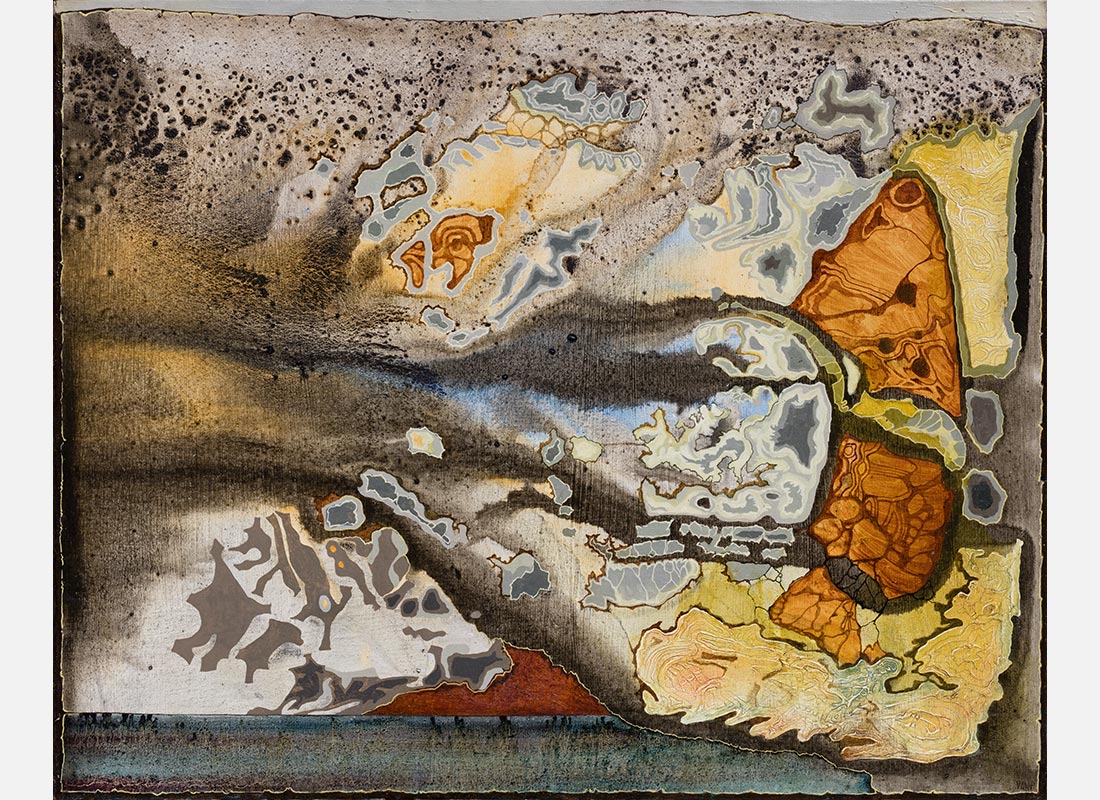 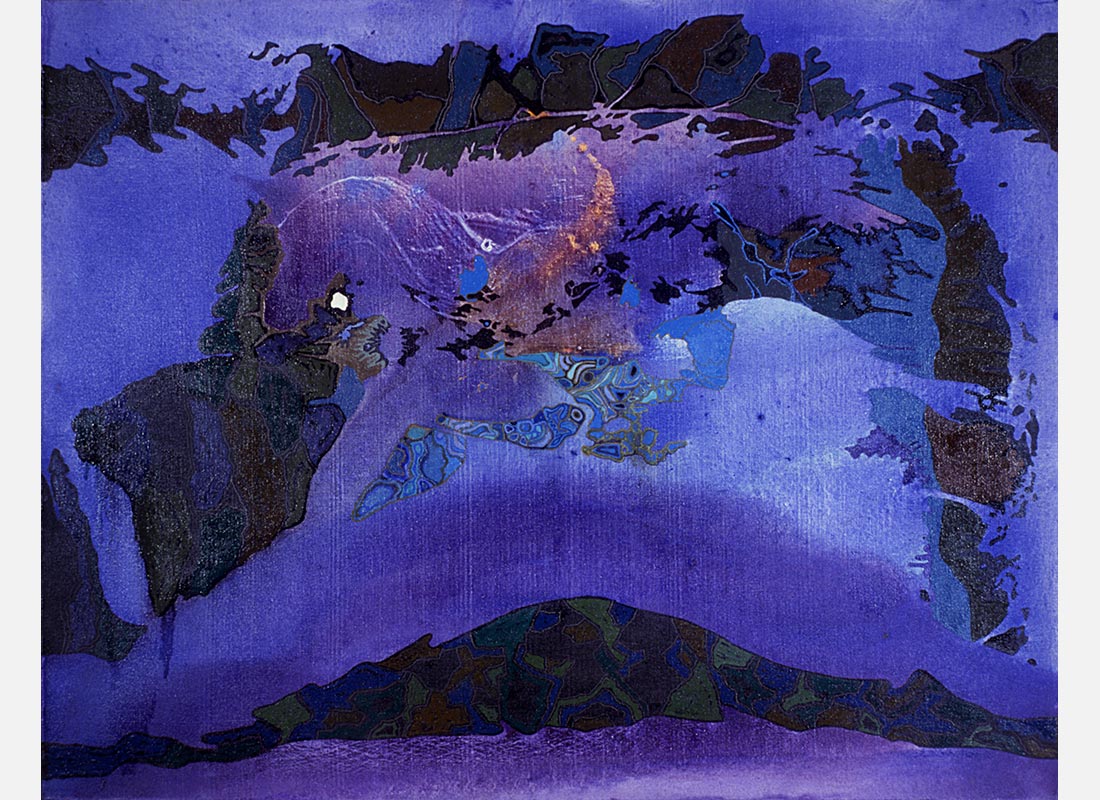 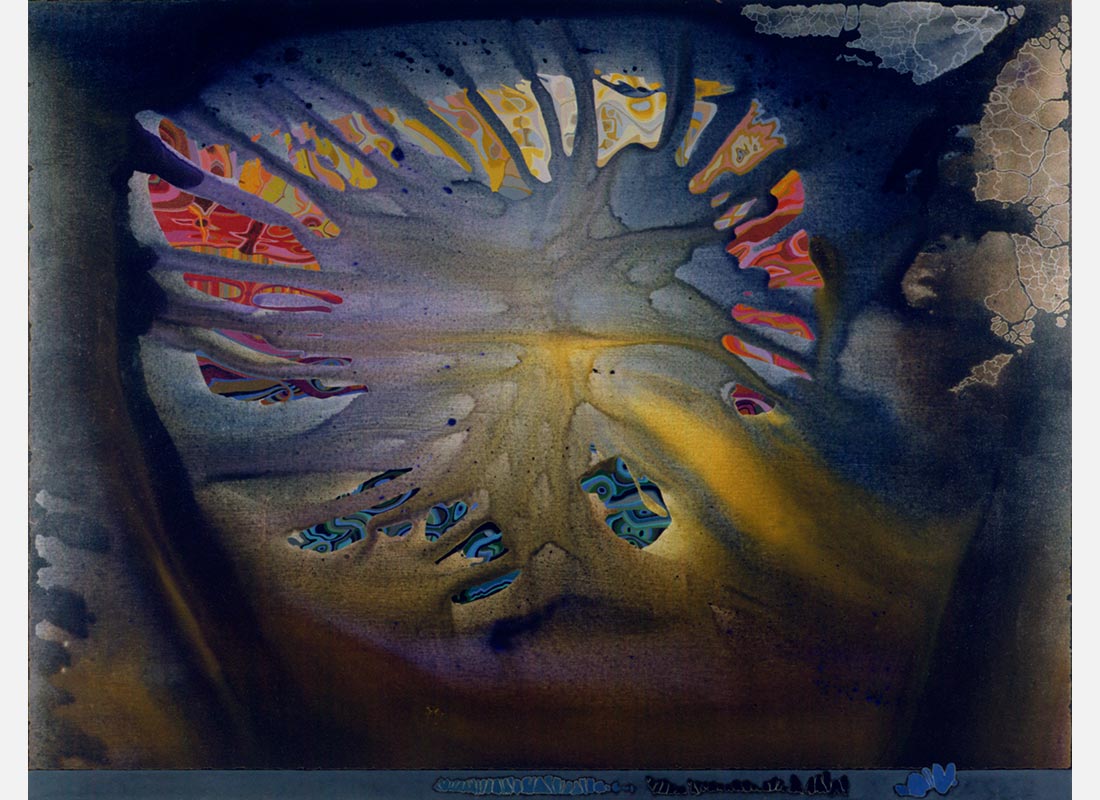 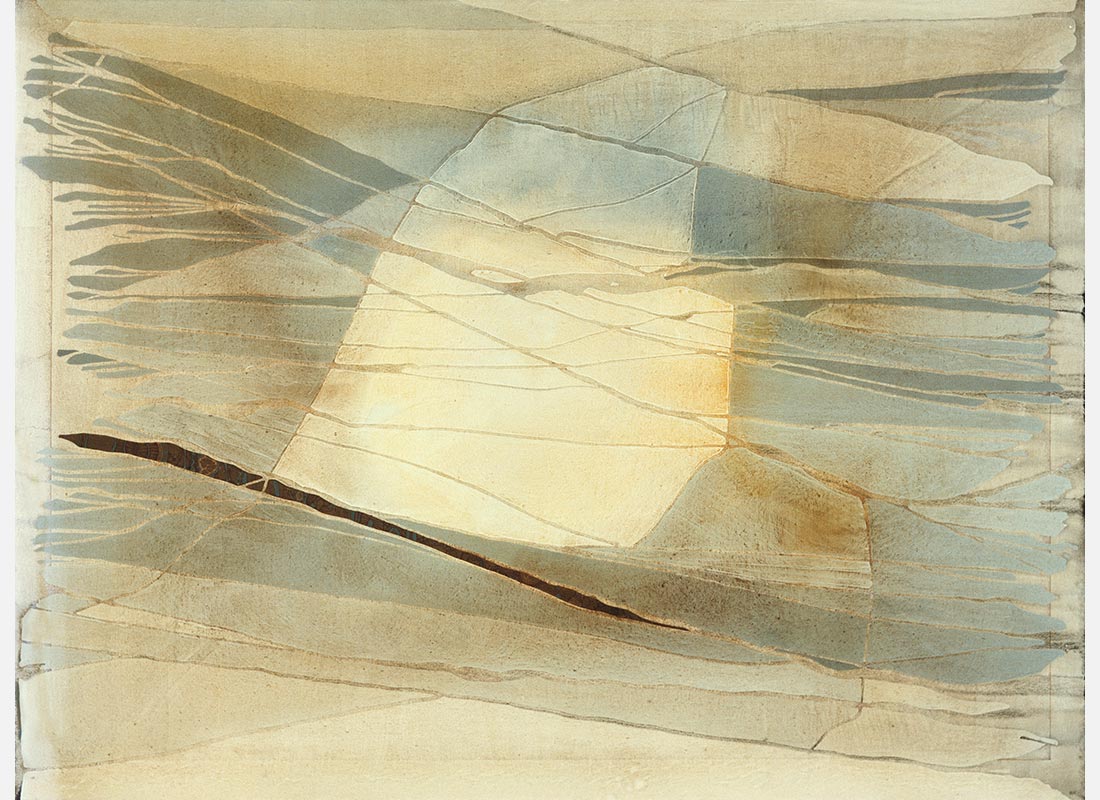 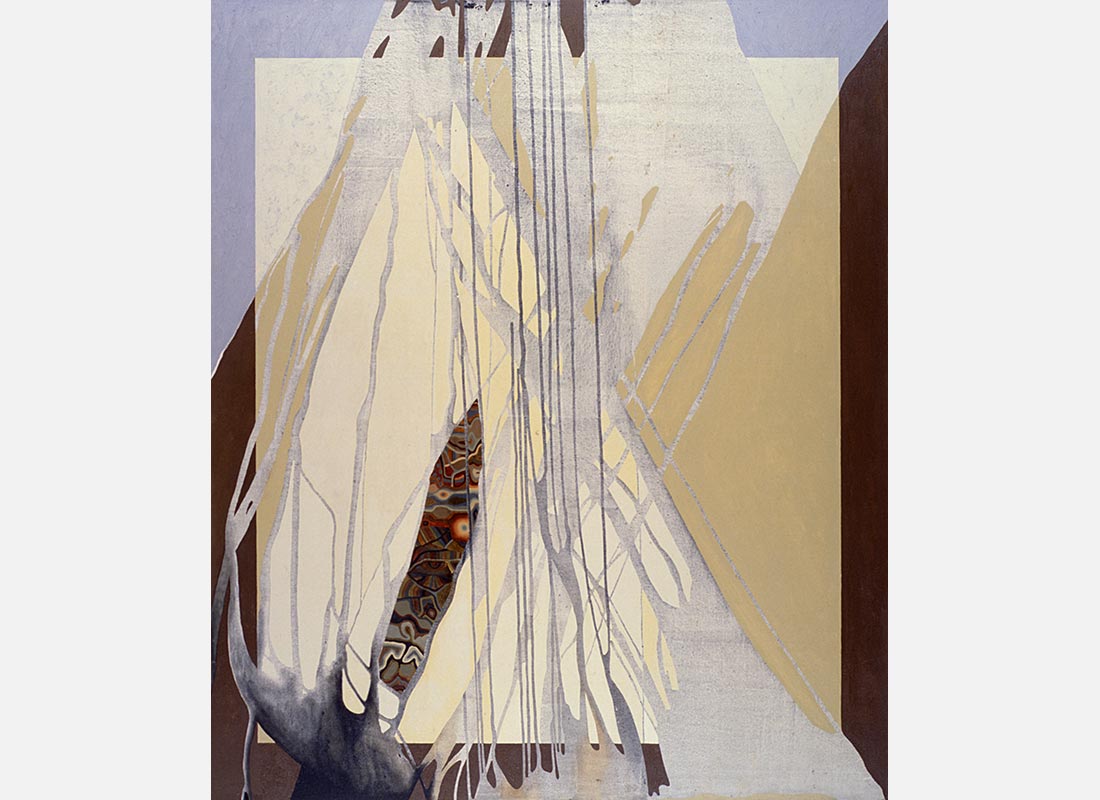 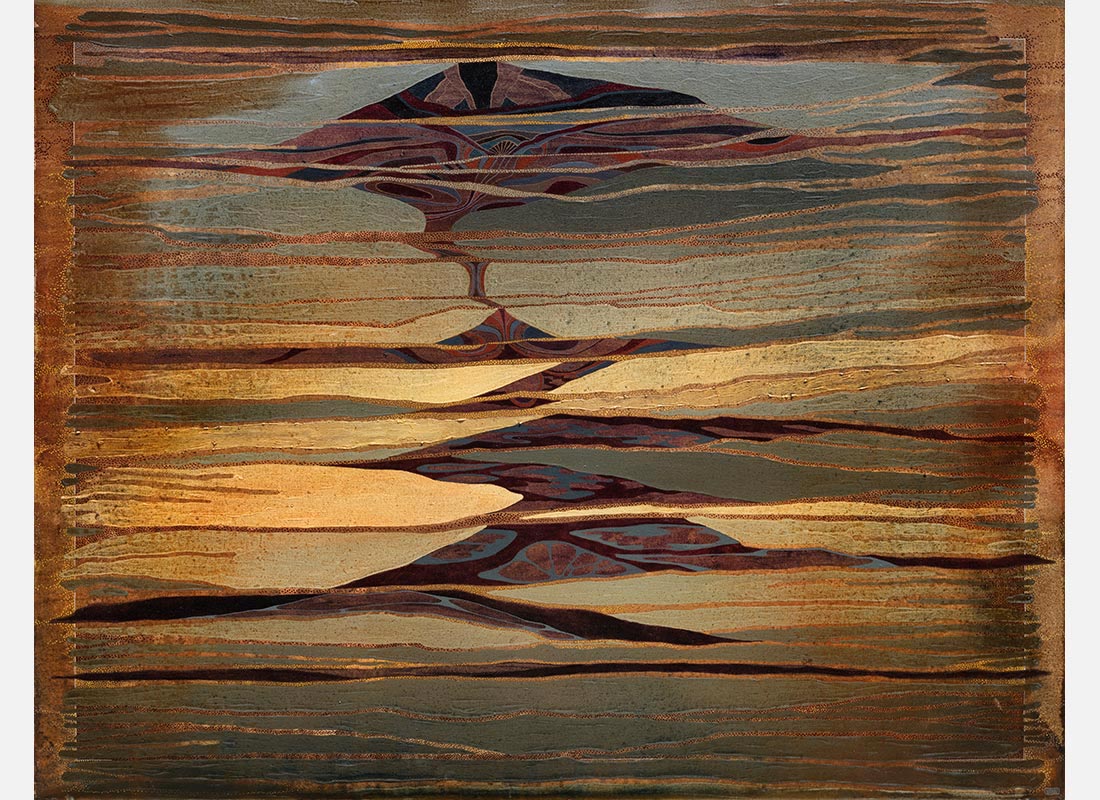 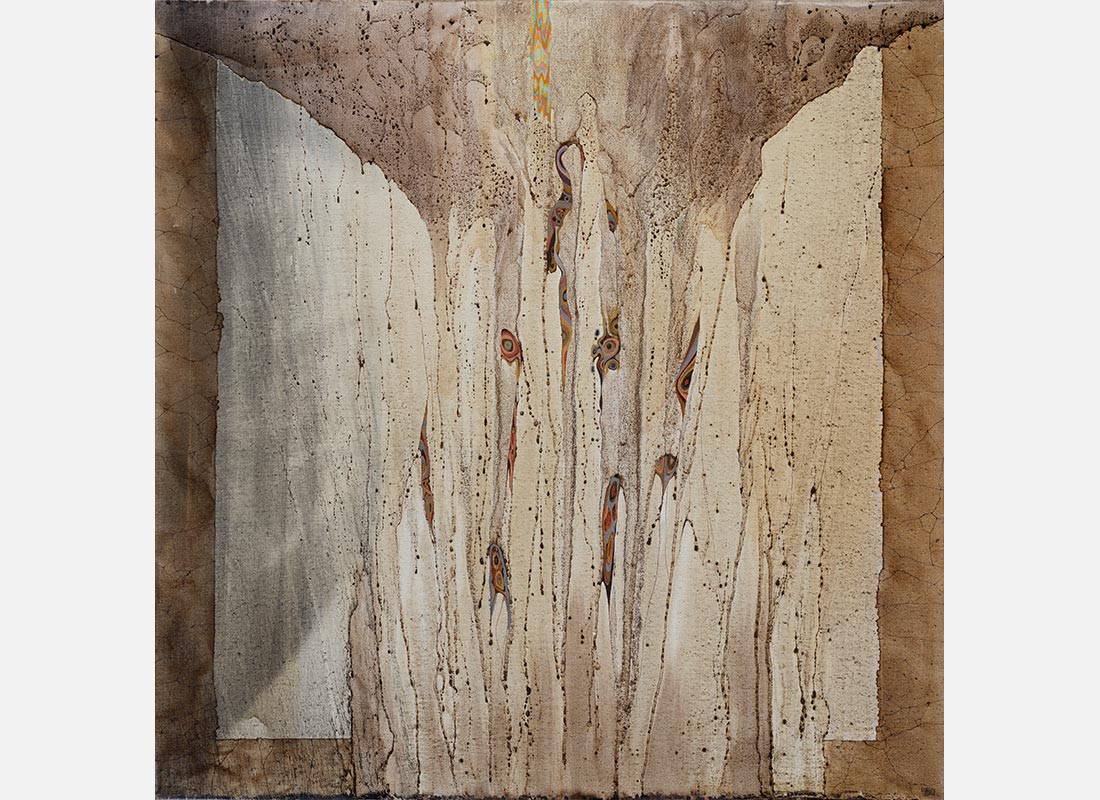 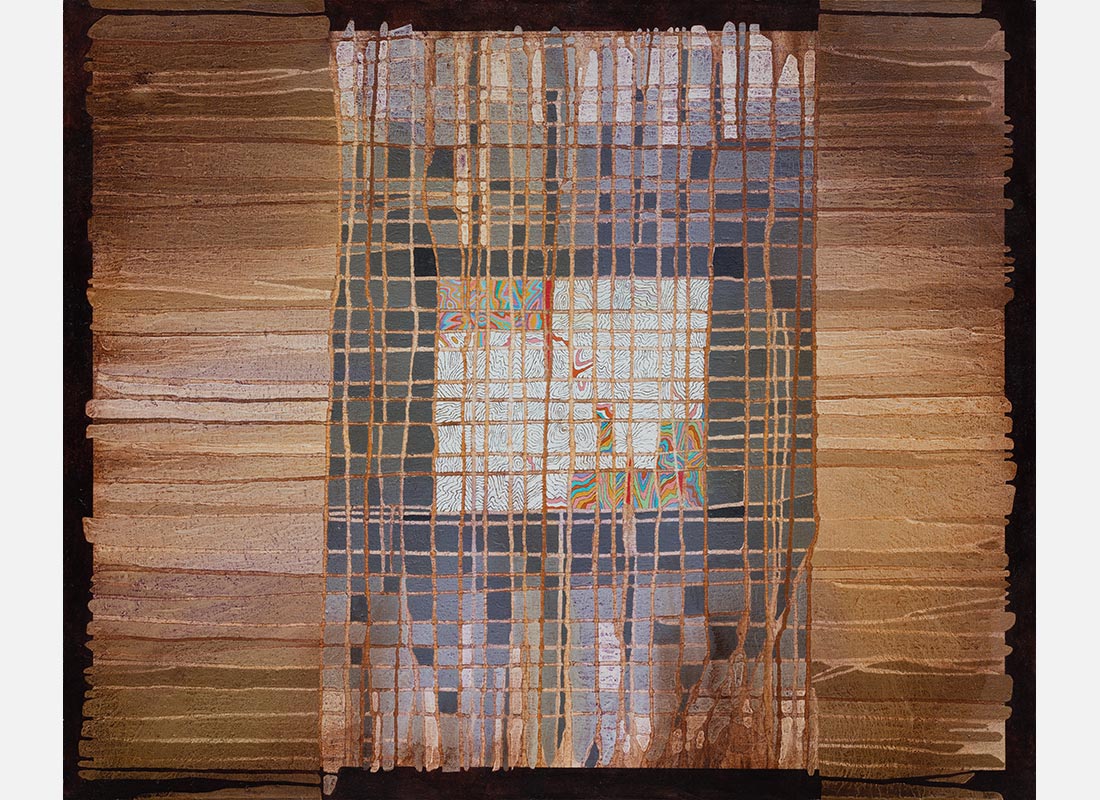 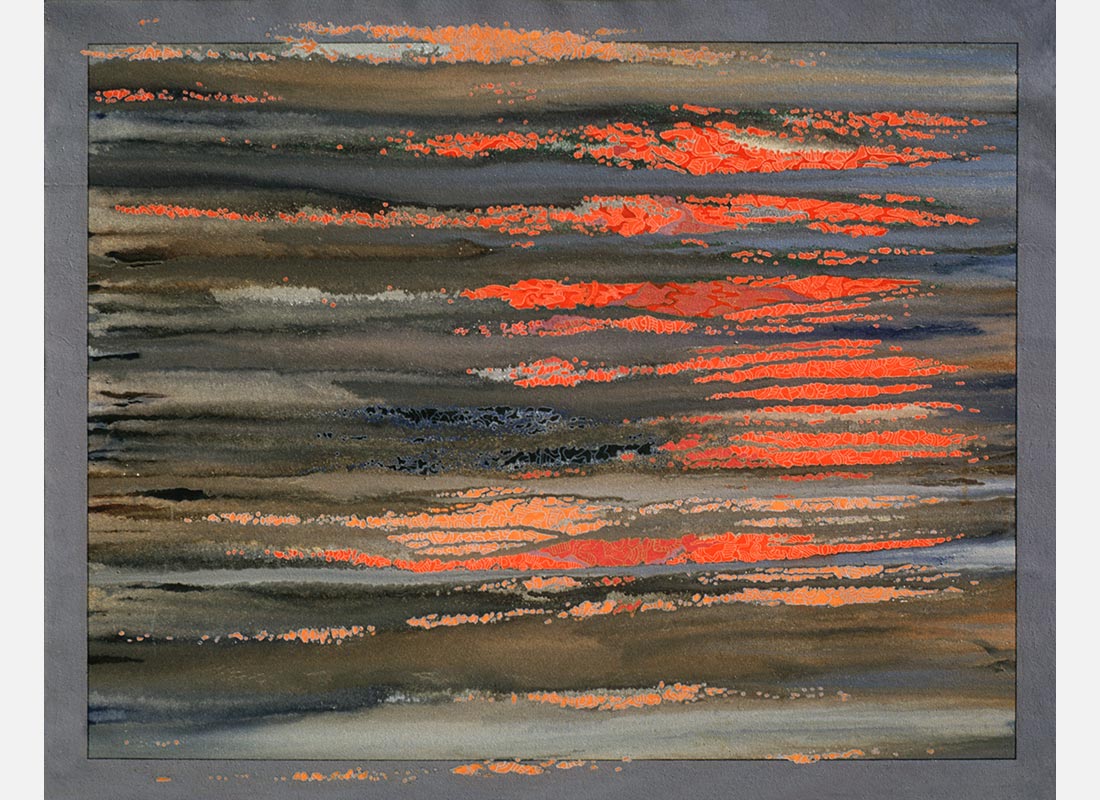 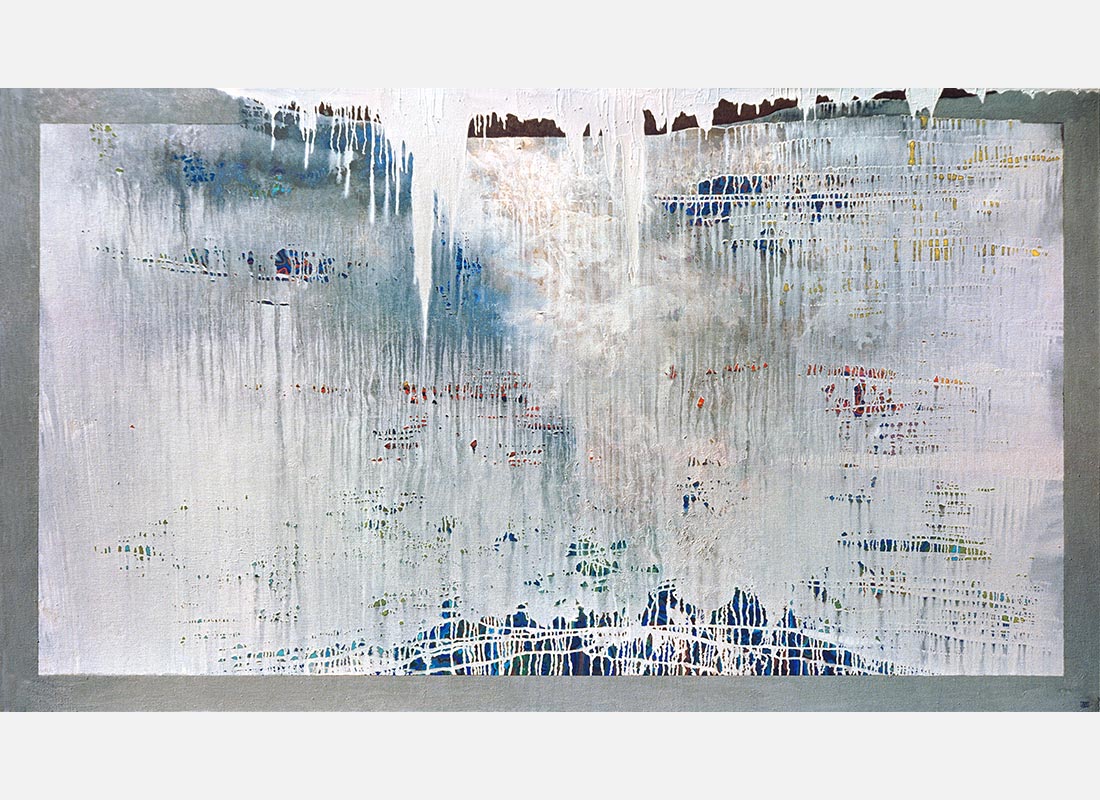 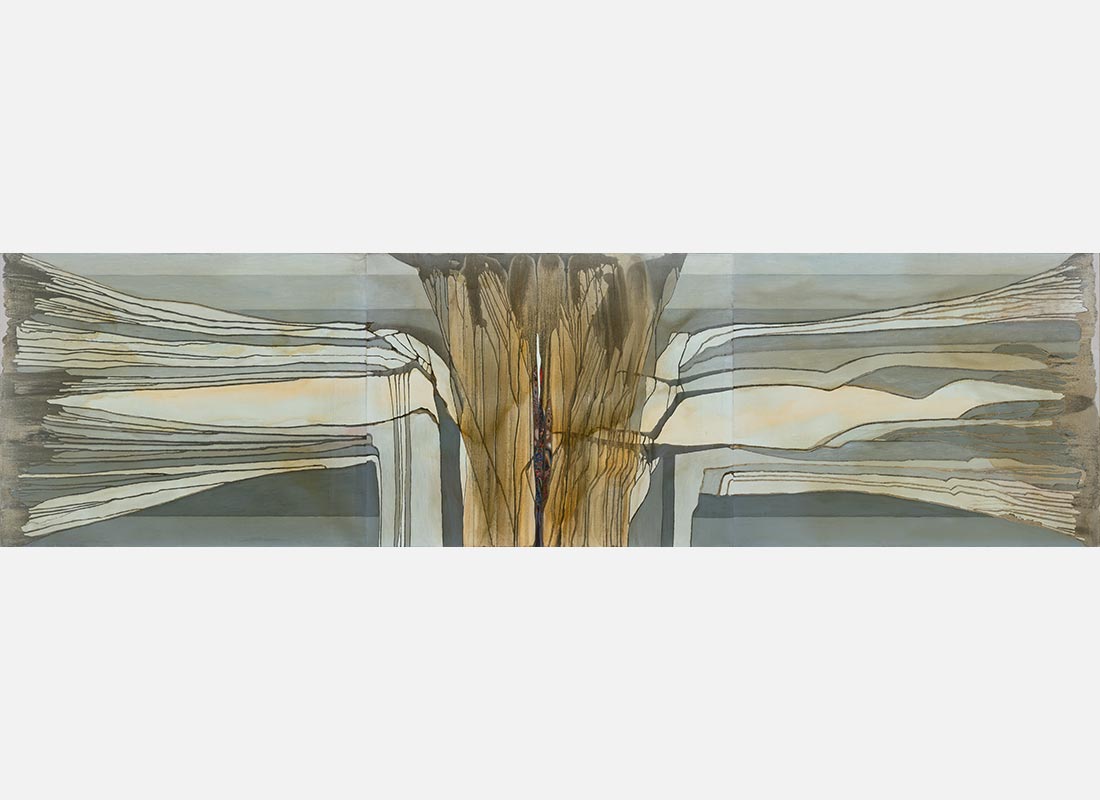 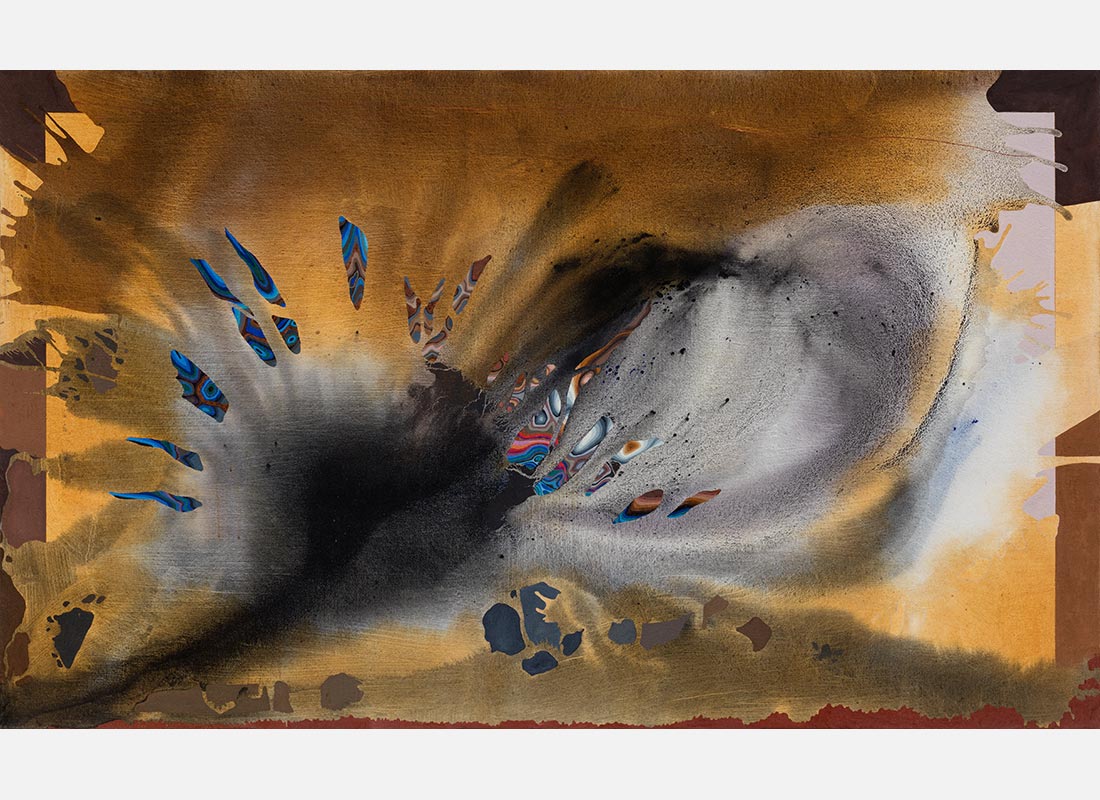 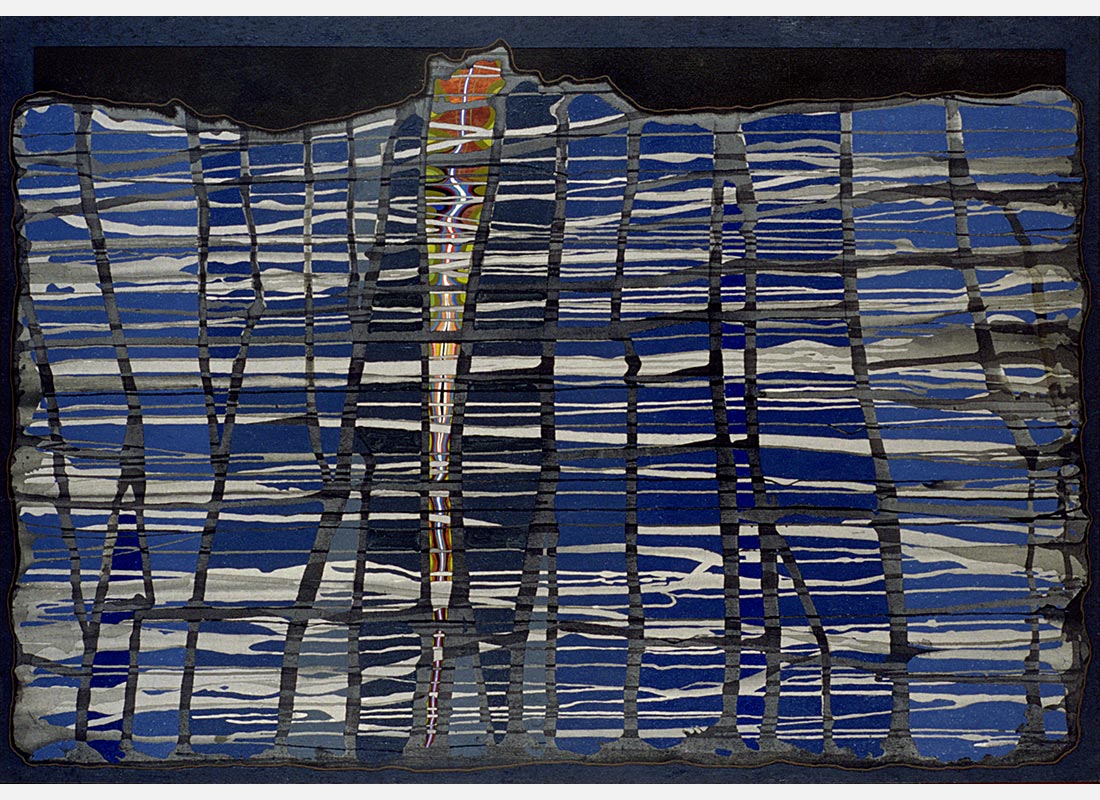 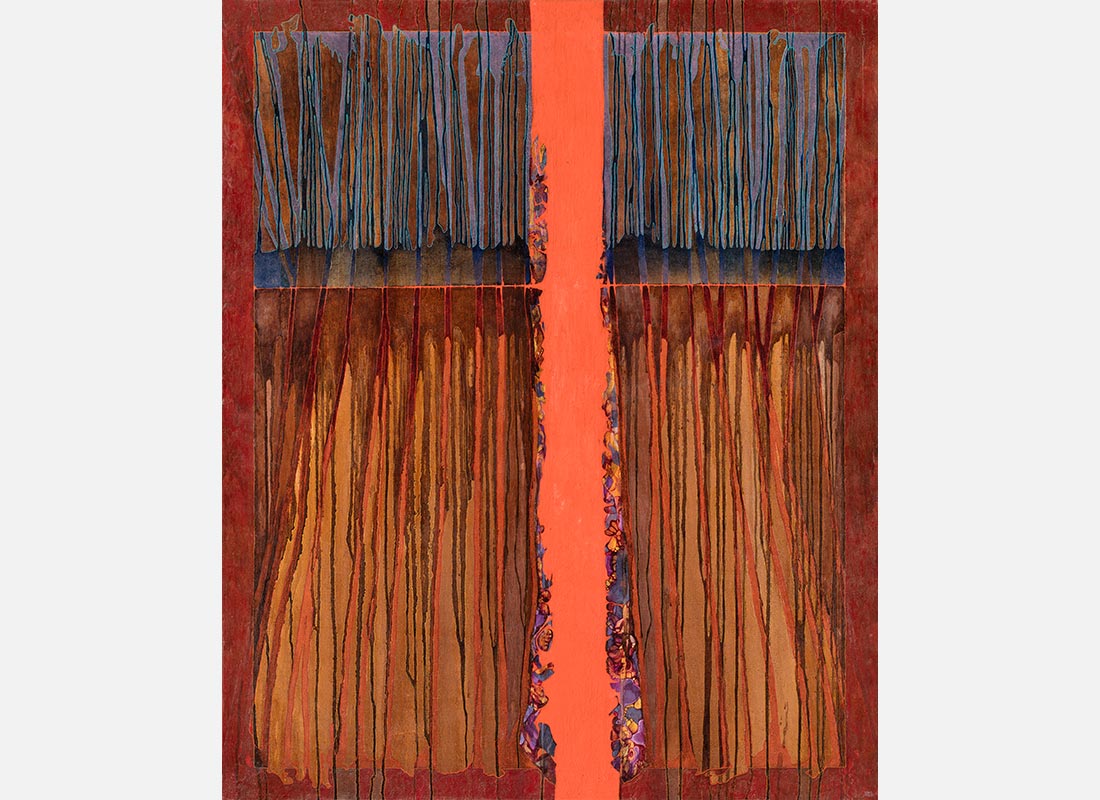 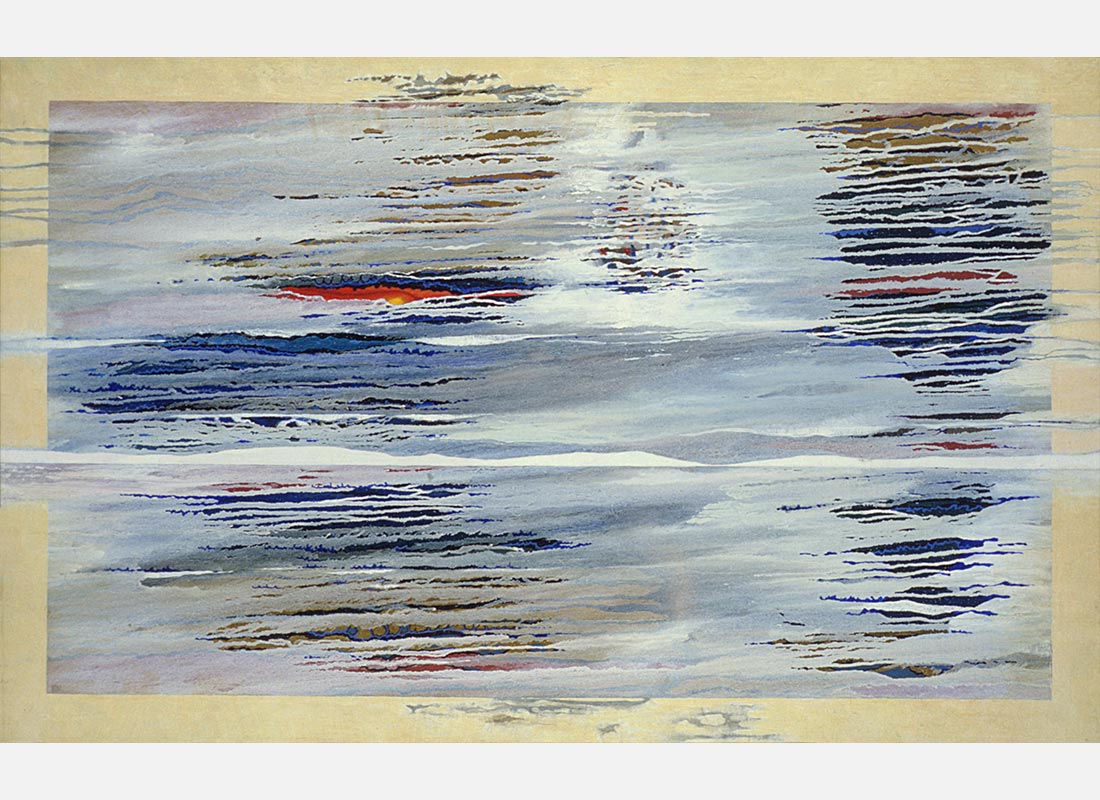 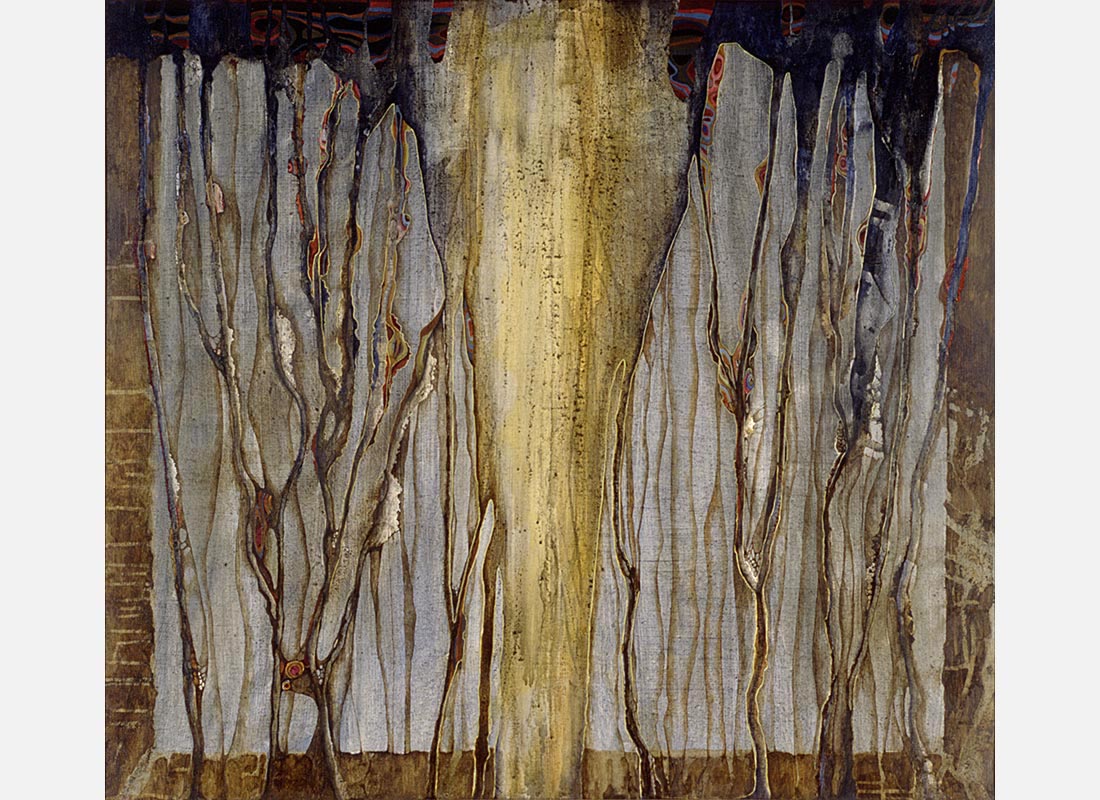 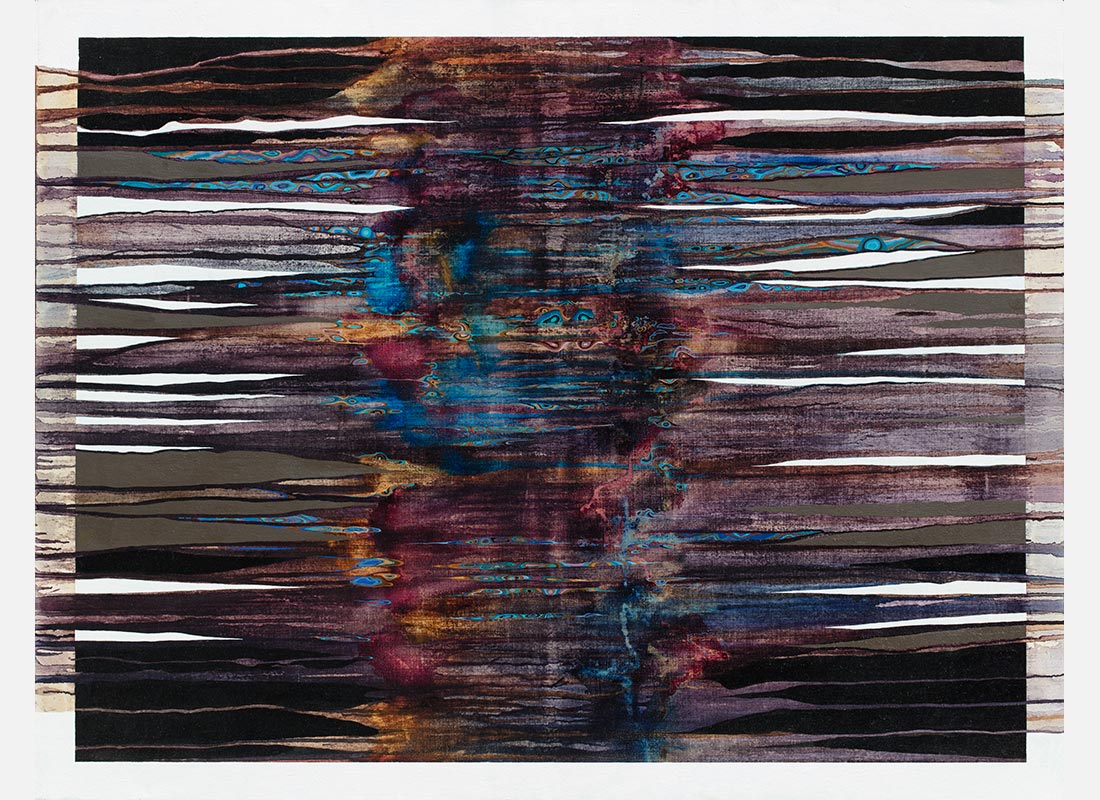 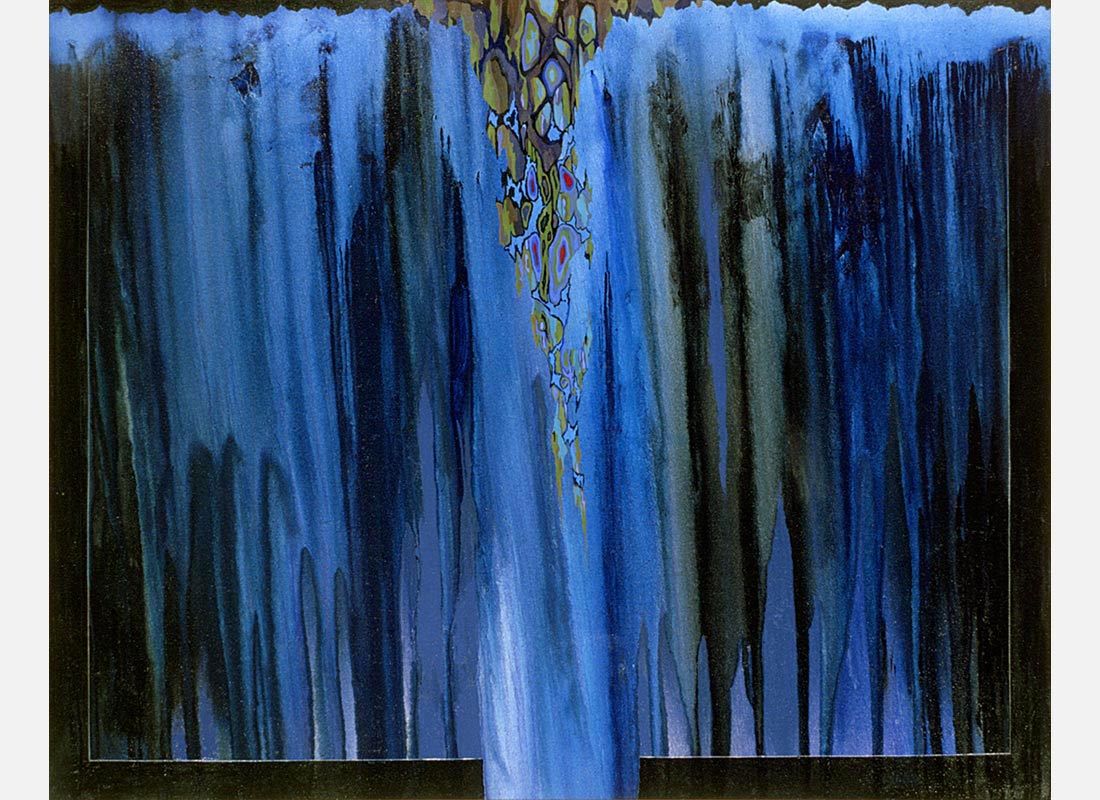 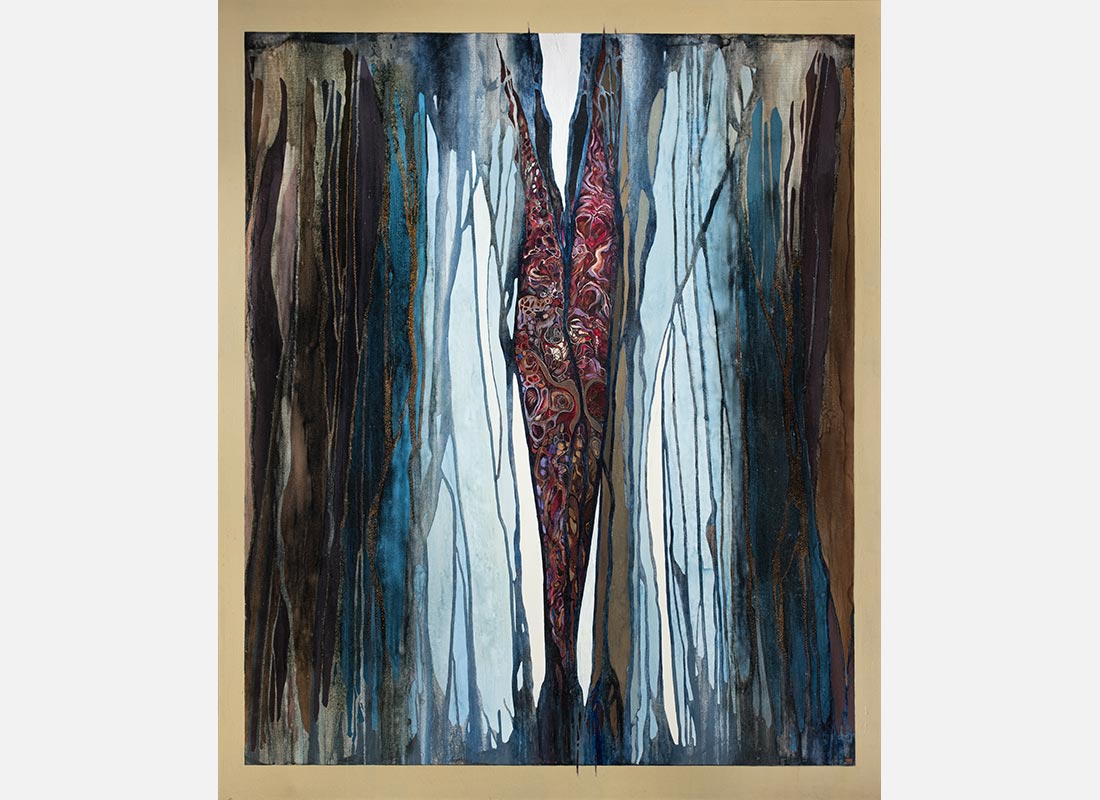 When Vanni went to America in ’79 he was fifty-two years old. His Roman period, which had interrupted his wanderings of the 50s, had lasted twenty years. With the passage of time, however, he came to miss the stimulation derived from questioning his own creative world through direct comparison with different realities.

His activity in New York began with a series of works that, while maintaining a continuity with themes from the mid-70s, soon introduced new elements and a changed stance. Alternating themes are developed, to then reappear independently in new series of works. The constant element is a medley of disparate languages and iconologies that refer to earlier investigations, to his empirical experience of the outside world, and to his intellectual experience with the history of art.

Certain influences and parallels generally remain hidden in his canvases, such as the language of the media, evoked in the multiple framings that exist simultaneously in a single work. And it is important to remember Vanni’s deep admiration for Ariosto, particularly the ingenious construction of Orlando furioso, where parallel episodes occur at the same time. It is similar to music, where, in the central portion of a fugue, when various staggered themes meet up at one point, to then take off again, in counterpoint to each other. In the same manner, Vanni arranges his visual itineraries that guide …the viewer to move within the canvas itself, where the painter has worked out the details of the voyage, the velocities of displacements, the obstacles, the rhythms, the illusory penetrations into depths as transparent as crystals or as dense as clouds; all meticulously orchestrated, but leaving the observer the freedom to interpret according to the associations of ideas dictated by his own experience, culture, and familiarity with language. And the painter acts as a guide along the visual pathways that he has prepared: shortcuts, detours, labyrinths, chutes, clearings where one can rest. Thus the painting manipulates time as well as space.

Following this concept, Vanni develops a working method that, from this point on, will be a constant element of his creative process: the relationship between a spontaneous form and a rationalized intervention. The canvas is invaded by an energetic flow of very liquid paint, which runs through the painting, overrunning it with a freedom of movement that evokes an unleashed, primordial force of nature, like a volcanic eruption or an ocean wave. The initial flow of paint represents the irrational, chaotic, formless element that spreads out while Vanni allows it to develop in natural fashion, intervening only marginally, tipping the stretcher frame or adding secondary flows of paint, always with the intention of creating like nature. This is followed by a long phase during which this initial tumult is subjected to a rationalization dictated by a careful and meditated analysis that detects suggestions that might give form to those ideas that appear in embryonic form. Thus a coherent dialogue is created between material and intellect. From this point on, the material – intellect dialogue will characterize the way Vanni’s paintings are made, strengthening possibilities of multiple interpretations and the metamorphic and ambiguous quality he is looking for.

Three directions of research emerge, all of them holding equal importance in the work of the next three years. The first is an emphasis on spatial and stylistic scansions, in the dialogue-comparison among the various canvases within a canvas, and in the points of passage or boundary between one reality and another. He executes a series of small-scale, vertical works where the space is subdivided into two squares. A heavily creased piece of fabric is glued to the upper square, and its mirror image, graphically rendered, appears in the lower quadrant. Thus the rhythms and pathways of the upper square are reinterpreted in another language in the lower portion. A light-colored glaze over the entire painting creates a subtle transitional tie between the two interpretations.

The second direction is an investigation of bio-geomorphism, emphasized through a dualistic confrontation with the raw material. There are only a few works executed in this vein, but they are all significant, including for future developments. While it might seem that Vanni is giving free play to pure material expression in these works, it then becomes clear how any manifestation of material exuberance in fact serves to make the opposing analytical intervention even more evident. Lava like explosions radiate changing transparencies, over which a corollary of bio-geomorphic forms is inserted. The initial impetus thus is transformed into stagnant material.

The third direction is developed in a series of works that explore the possibilities of synthesis and eclecticism. There is an attenuation of the evidence of the dynamic aspects of the initial material. Vanni rediscovers Kandinsky’s observations about painting forms in their becoming rather than in their being. Many of the ideas developed in these works came from in the observation of nature, particularly the sea. For example the treatment of the painted edges in the works from this period evokes the effect of the sea along the rocky coast: jagged edges of rock and algae juxtaposed to the fluid edges of the sea and its undertow. In various works, however, the naturalistic elements go beyond the formal suggestion, to enter more obviously into the figuration.

Some works from Vanni’s early years in New York were exhibited in a series of six solo exhibitions in Japan, held in the spring of ’83. Vanni spent more than a month in Japan, a period that would end up being as significant as his first trip to Paris, in ’48. He was particularly struck by the relationship of Japanese culture to nature, expressed through garden design that obeys …an artificiality that must not remove anything or add anything to the richness and expressiveness of nature, but which must represent it, this nature itself, after having interpreted it and exposed its most significant aspects, as if the macrocosm had to be rediscovered and recognized in the microcosm.”

Upon his return to New York the geomorphic structure of his latest works loses its crystalline origin, in favor of a layering, where water becomes tone or stone becomes liquid. The earlier flows of paint disappear, making way for a new technique. The canvas is begun with the creation of multiple streams of paint that run along the canvas, segmenting it into irregular bands and triangles. The areas of canvas left over from the signs drawn by the streams of paint are filled in with fields of color that thicken along the edges, assuming the morphology of blocks of sandstone eroded by the elements. Vanni would cover up all the streams of color that were not significant for the overall composition. He then covered the entire work in a glaze, emphasizing the expressive potential of the underlying material and enriching the chromatic intensity of the streams of paint or brightening up certain areas of dense color. As a result of this process, material becomes sign and sign becomes material. The formal coherence of the work is then refuted by the presence of certain relatively small elements that convey other logics.

The image of the flow of pictorial material from the top downward, central to the imagery of Metamorphosis, is also present in the work of other painters working at the same time, such as Larry Poons or Gerard Richter. But in the works of these artists, the expression of the material is the subject, representing itself as the pertinent event, in real scale in terms of the canvas that contains it, underscored by the plastic treatment of the mass of color and the pictorial surface. In Vanni’s work from this same period, however, the physical, tangible aspect of the material remains secondary. The emphasis is on the transmutations evoked by an iconology that, alluding to various constituent aspects of natural forms, suggests the transformation of one material into another Vanni’s long, complex investigations of the ‘80s absorbed New York’s multi-cultural life and the experience in Japan, mediated by a view of the entire history of art, revisited through teaching. The work of this period, in addition to being shown at Vanni’s open studios, was exhibited in his final show at the Schneider gallery in Rome, in the spring of ’89 and at Galerie 88 in Luxembourg, in the autumn of that year. On this occasion, Quadri d’America is published, which reproduces the principal works from this decade and in which Vanni expounds the ideas that support his work.