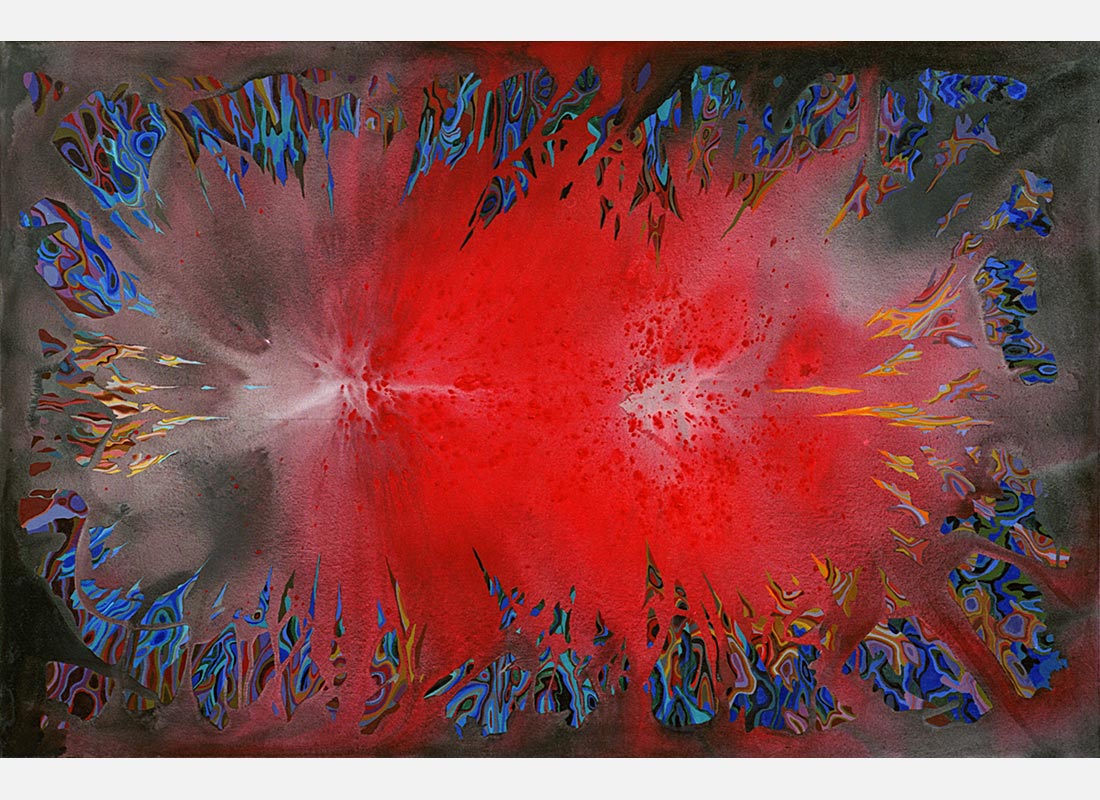 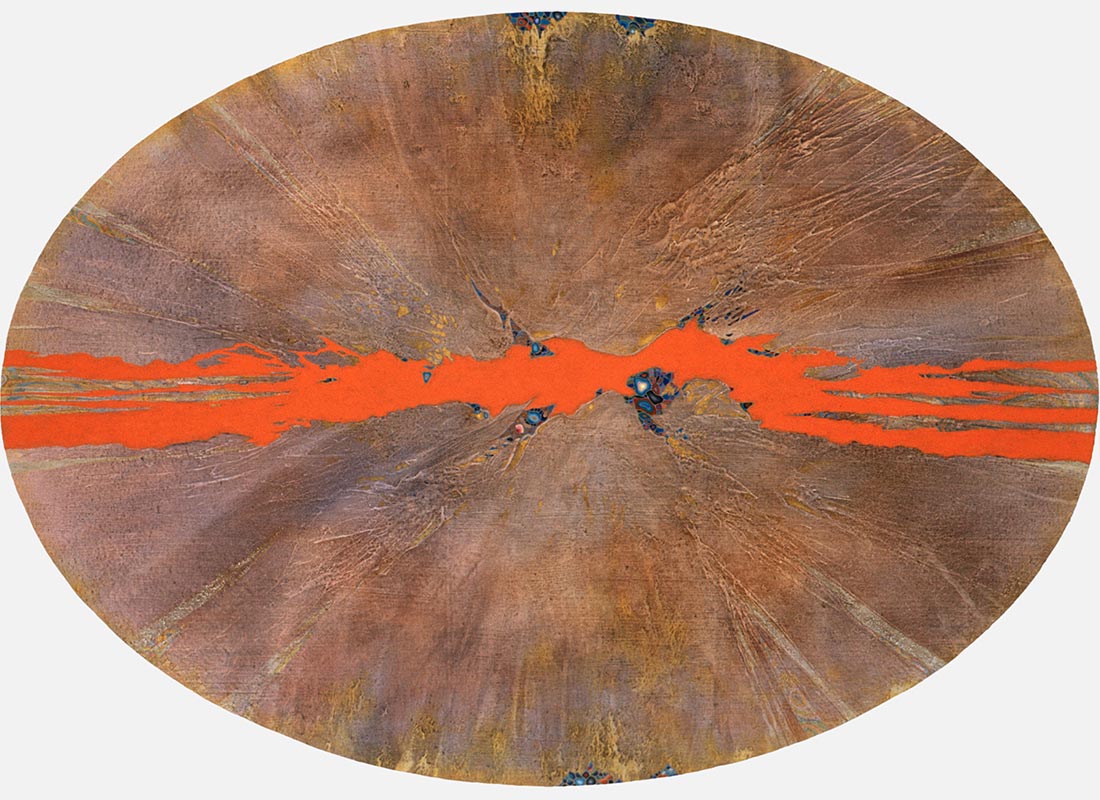 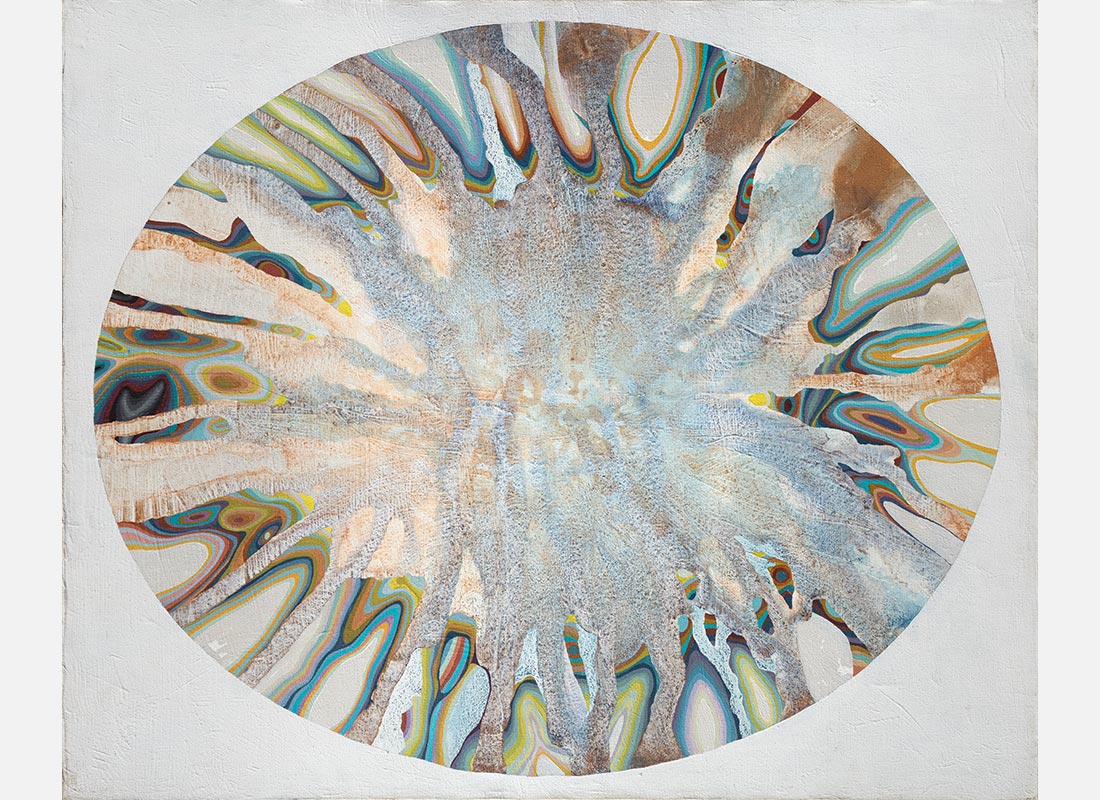 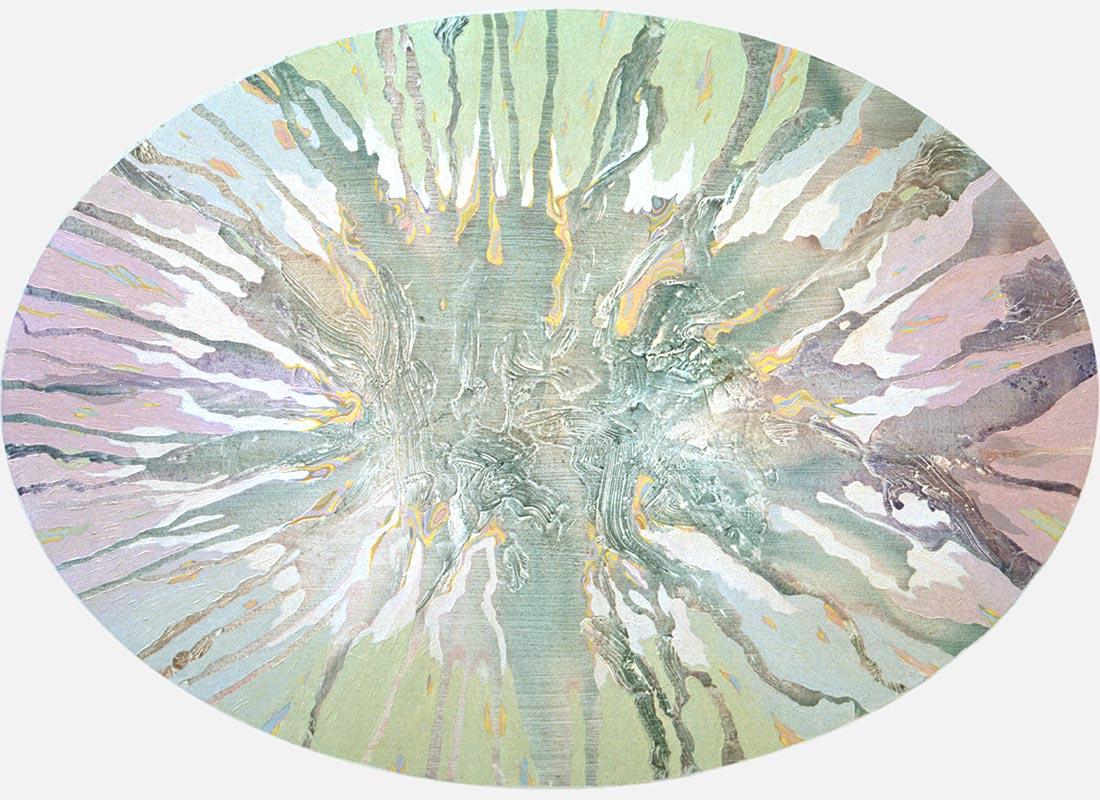 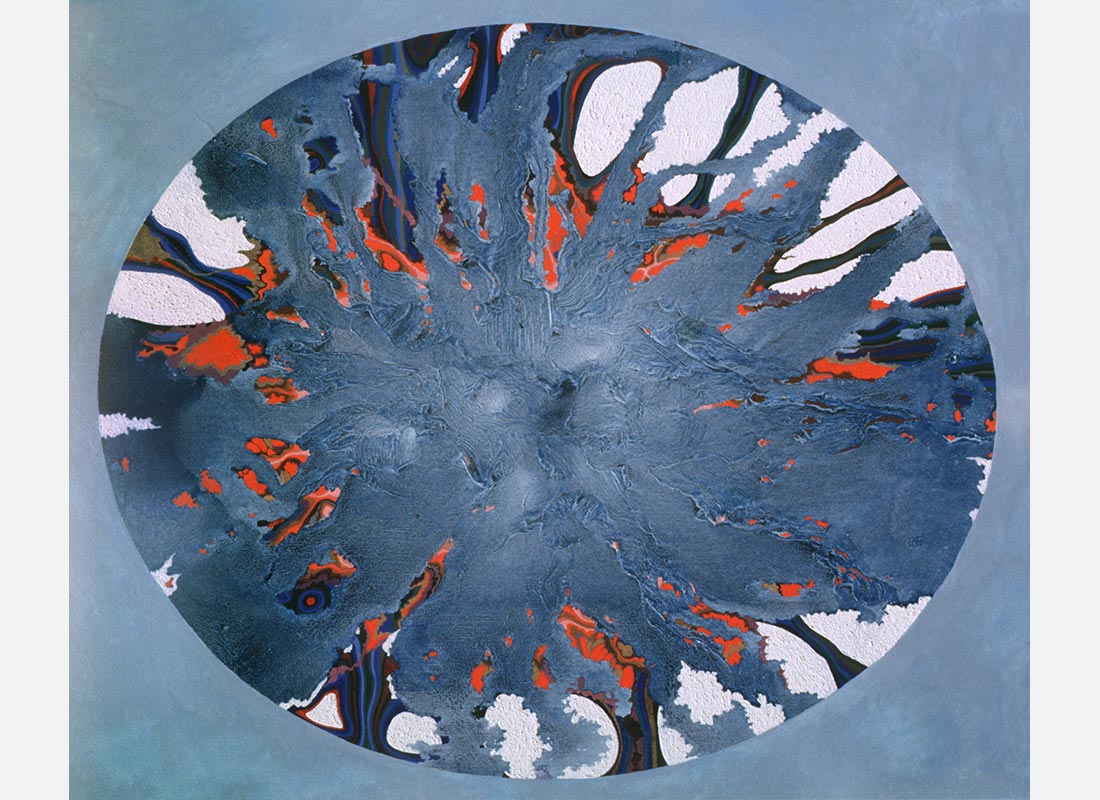 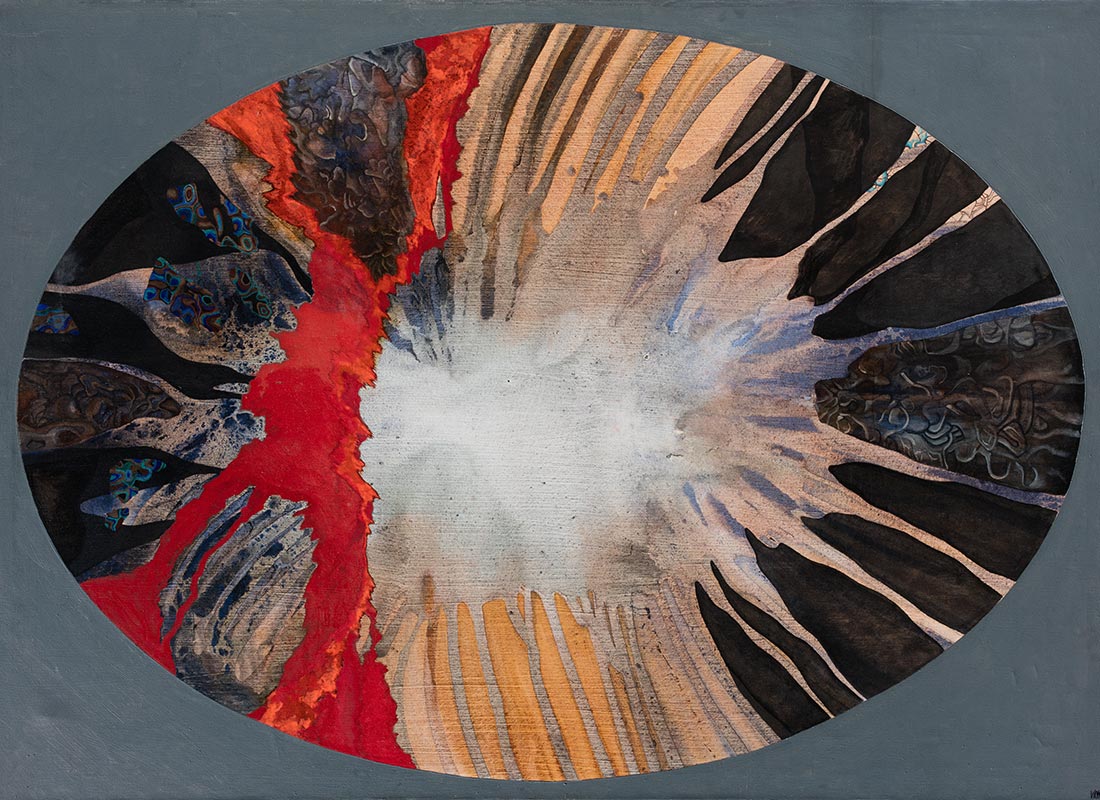 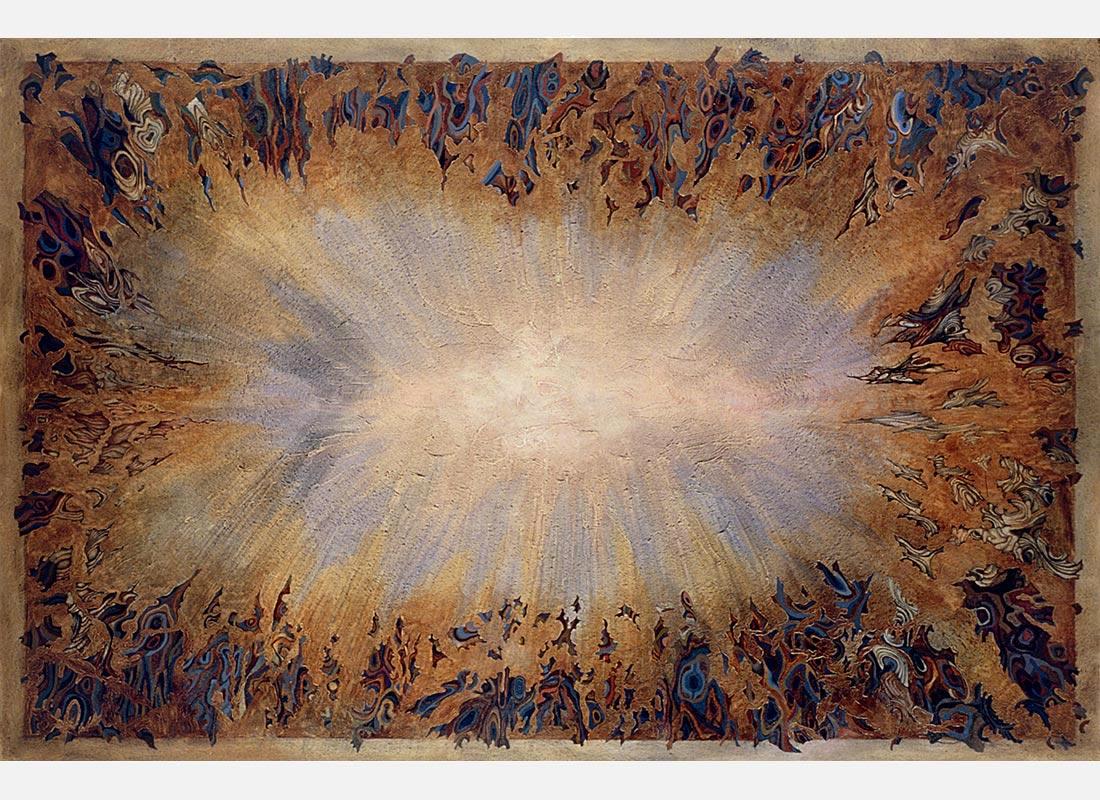 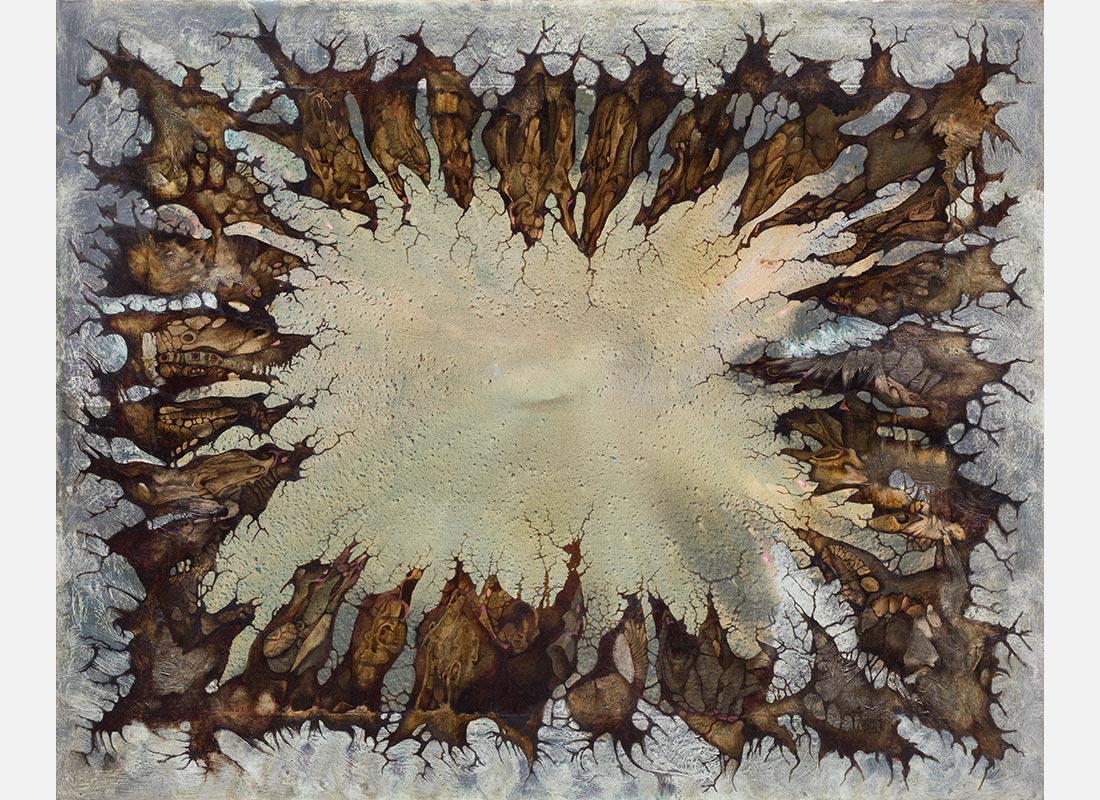 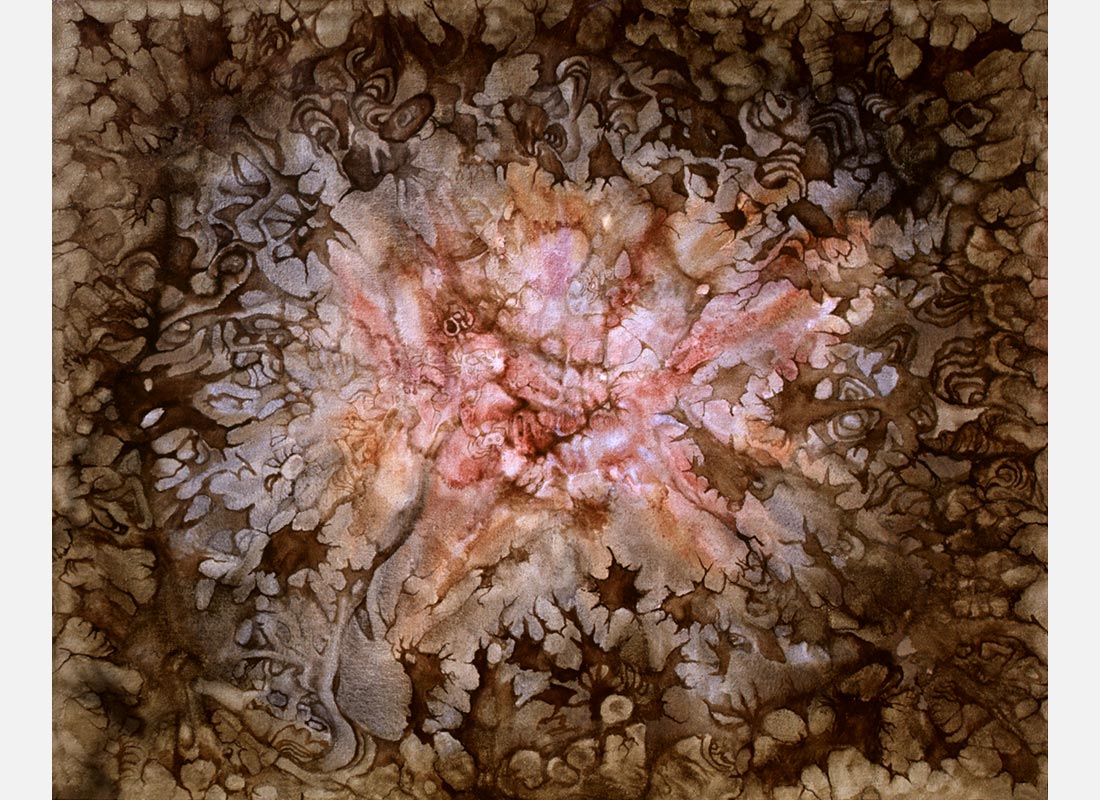 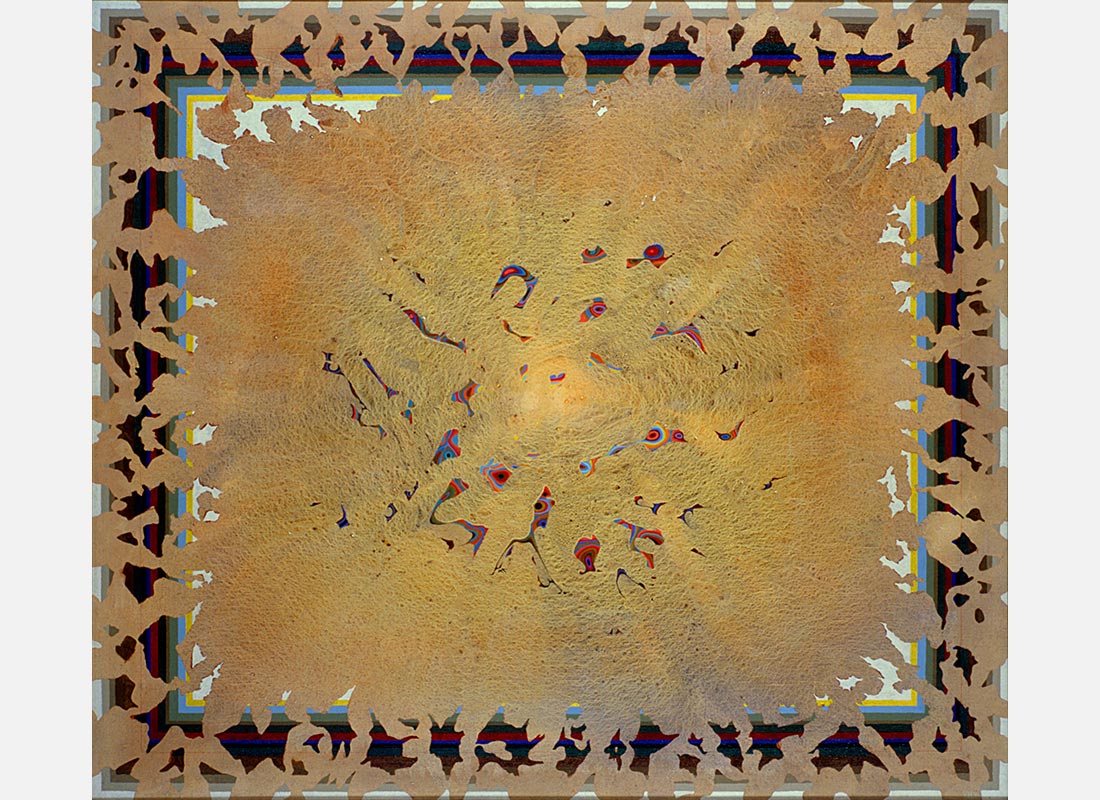 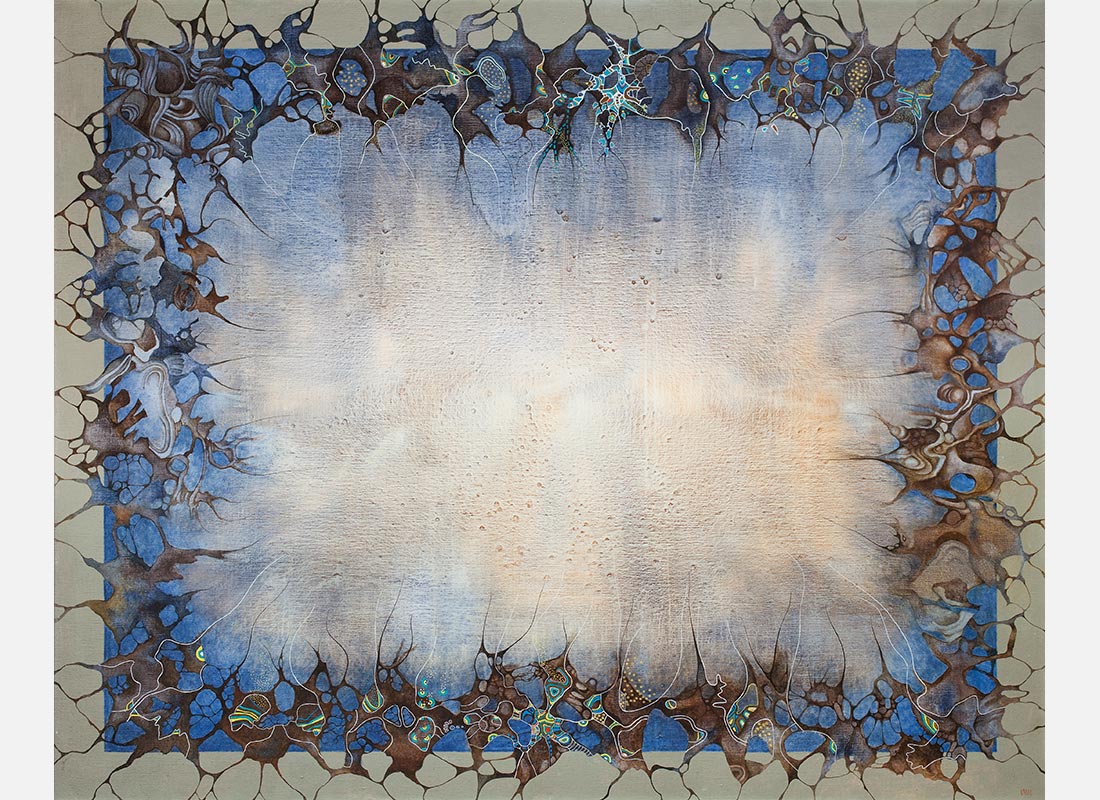 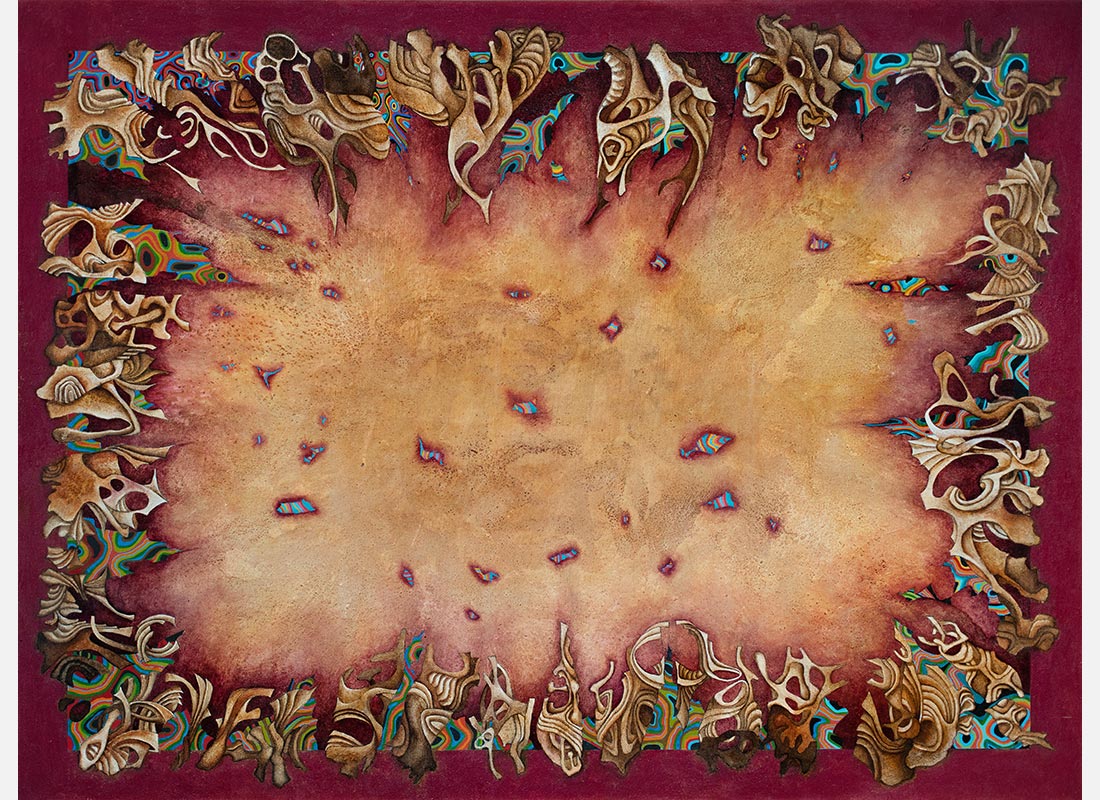 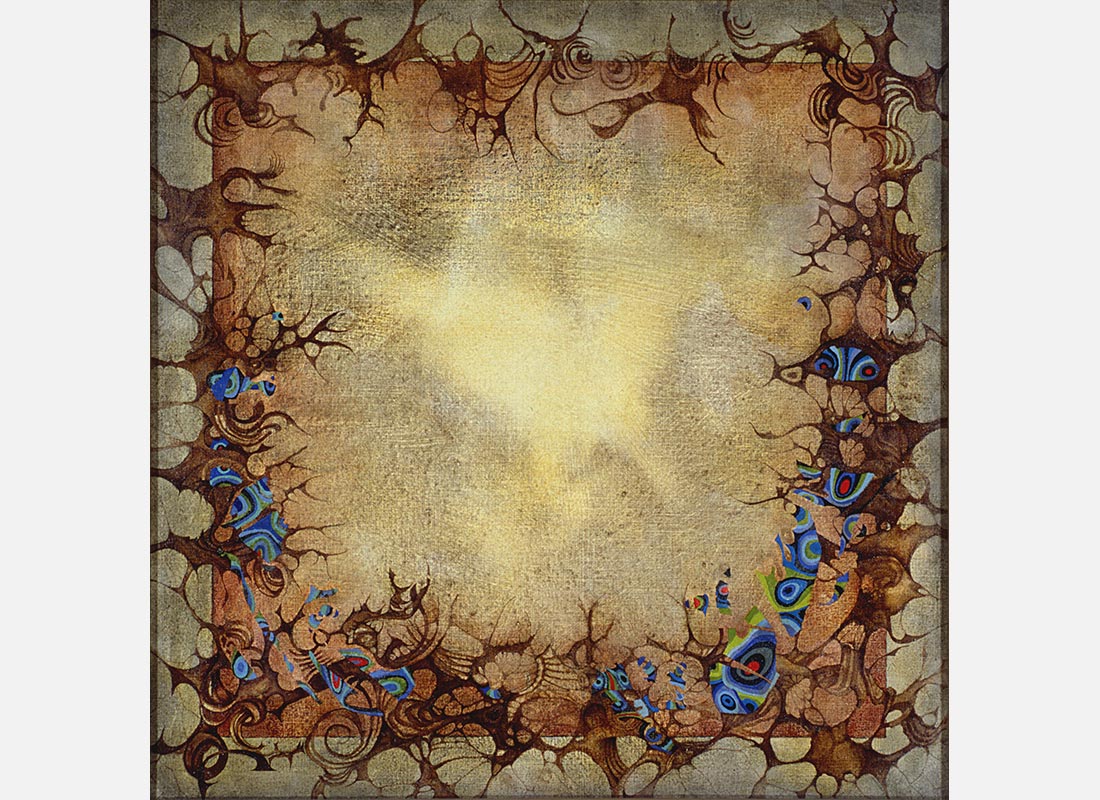 Since the mid 80s Vanni created a series of paintings to be placed on the ceiling. By looking at them we realize how removing the force of gravity in a work’s spatial dynamic provokes a completely different approach. Having no bottom, nor top, there is also no right nor left. The consequential reading to which we, as westerners, are used to is irrevocably questioned. Thus the experience of our travel through the painting, so dear to Vanni, can become concentric, eccentric, radial, and it adds to the feeling that they are levitating in space.

He created these compositions, with the canvas often lying flat on the floor, working from all sides simultaneously to avoid privileging one side against another. Vanni’s awareness of a world that floated in space, with no top and bottom, dates from his youth when his father, who was a parasitologist, was showing him amebae and protozoa through the microscope.

While it might seem that Vanni is giving free play to pure material expression in these works, it then becomes clear how any manifestation of material exuberance in fact serves to make the opposing analytical intervention even more evident. Even when the colors look like explosions of lava that radiates changing transparencies, a corollary of bio-geomorphic forms is always inserted or extrapolated from the deflagration, determining its containment. The initial impetus thus is transformed into stagnant material. Of the ceiling painting series, three works in particular exemplify the evolution of this concept. Homage to Andrea, the first one of the ceiling paintings series, has been inspired by the double focal point of the Andrea Pozzo’s great fresco in the ceiling of the church of Sant’Ignazio in Rome. A double deflagration creates a rectangular distribution of forms. This ties the geometric forms to the perimetral structure, rather than to the central fulcrum. With the canvas placed on the ceiling, is now the viewer that determines its orientation.

With Power of the Center, where the compositional content is underscored even in the title, the theme of the explosion as a creative force is replaced by a microscopic disorder made up of material that does not create forms but expresses a rarified space. This space, which occupies the central portion of the painting, is surrounded by forms anchored to the frame, which is articulated symmetrically along two Cartesian axes.

In Spirits of War, the ordered and harmonious cosmic relationships of Power of the Center are expressed through a violent laceration. The perimetral forms have lost their roundish volutes, to acquire a spiked appearance, with contorted roots that assault the surrounding space, coagulating toward the center and expanding toward the periphery. The central space is pervaded by a light green, almost metallic, luminescence – a dematerialization of the olive branches that, shaken by the wind, expose the underside of the leaves. The lightness at the center of the painting is opposed to the tragic nature of the perimetral forms, reminiscent of olive roots transforming into dried out bats, seen by Vanni in the market of La Paz in Bolivia, hung in festoons on the carts of layqua Quechua healers who use them to prepare potions.

As Spirits of War was dramatic, the three paintings that share its compositional structure are uplifting. In fact Spirits of Spring, Conterpoint and Ritual Love Dance give us the opportunity to realize how Vanni is able to provoke different emotions from similar premises.

The ceiling paintings, with their lack of unilateral spatial reading, are perfectly in line with what has been one of Vanni’s constant since the early 60s, a search for painted abstractions that can instill multiple readings. Throughout the subsequent years, often Vanni will sign his paintings on two sides, to point out that a different positioning of the piece will determine a different interpretation, with different meanings.